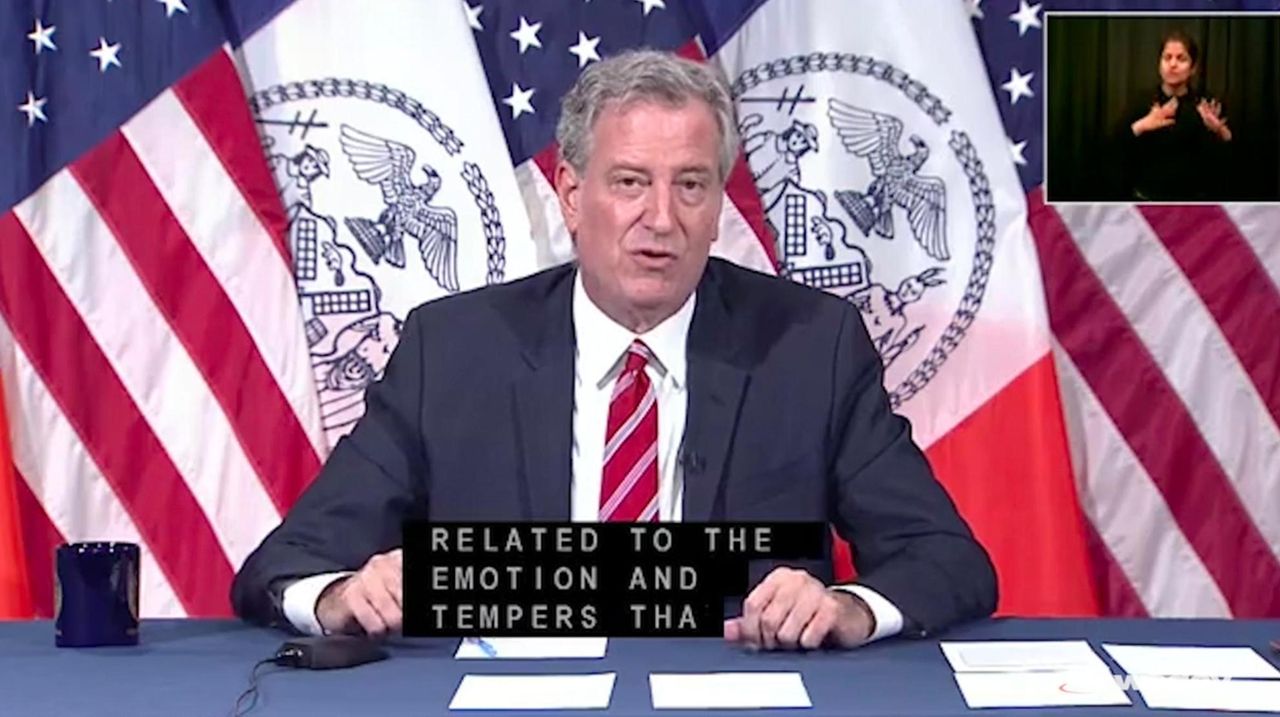 Gun violence exploded over the past week in New York City, with shootings and shooting victims rising to level not seen in at least five years. Mayor Bill de Blasio said Tuesday that the coronavirus is partly to blame. Credit: NY Mayor's Office

Shootings in New York City have continued to spike at such a rate that the number of those wounded by gunfire climbed by 414% last week compared with the same period in 2019, according to the latest NYPD statistics.

The increase has city officials scrambling to find a plan to stem the bloodshed, now at a level not seen by the NYPD in at least five years.

In a recent television interview, NYPD Commissioner Dermot Shea even compared the city to an ocean liner bearing down on an iceberg and disaster unless the criminal justice system is fixed, although he wasn't specific.

The overall totals were boosted by a big increase in shootings last week — 53 compared with 32 in the previous seven days — a toll boosted by at least 19 over the weekend. The number of wounded jumped to 72 from 46 in the prior week. The toll of gunfire victims wounded last week was 414% higher than the same seven-day period a year ago.

Other grim totals included a nearly 24% increase in homicides so far this year, as well as soaring burglary and stolen car offenses during the COVID-19 pandemic, which are up 47% and 51% respectively compared to the same period in 2019.

"It takes a long time to turn a ship that sees the iceberg directly in front of us and that is exactly what is happening right now,” Shea said in a Monday interview on NY1. “We have been trending this way for a while and the shootings are just the latest symptoms.”

Joseph Giacalone, an adjunct professor at John Jay College of Criminal Justice in Manhattan, said Shea’s decision last week to do away with plainclothes anti-crime units meant that gun-toting criminals are not fearful about going to jail or getting caught with firearms. When Shea announced the decision, he acknowledged that disbanding the units was a risky move.

The recent bloodshed prompted Mayor Bill de Blasio on Monday to say in an interview, also on NY1, that he was going to put more money into the city's Cure Violence program, which uses social workers and "violence interrupters” to try and prevent shootings before they happen. DeBlasio also said the NYPD would be shifting more officers into field units through the department's Summer All Out programs.

But some critics note that those programs have been in place for a few years and, while credited with a reduction of violence in some pockets, haven’t been able to slow the worsening situation in 2020. Since January, major crime has seen increases that surprised some city officials, who placed blame on the new bail reform laws as well as the coronavirus pandemic, which has led to the early release of certain prisoners, and courts having limited schedules.

“There is literally almost no one In jail, when you look at the levels,” Shea said on NY1.

Said de Blasio on NY1: “The criminal justice system is absolutely struggling to get back into gear. The court system, the [district attorneys] have not been prosecuting."

In a recent interview with Newsday, NYPD Chief Michael LiPetri, head of the department's office of crime control strategies, said cops are also seeing a big increase in prison parolees involved as either suspects or victims in shootings. Many of the shootings involve gang and drug disputes, he said.