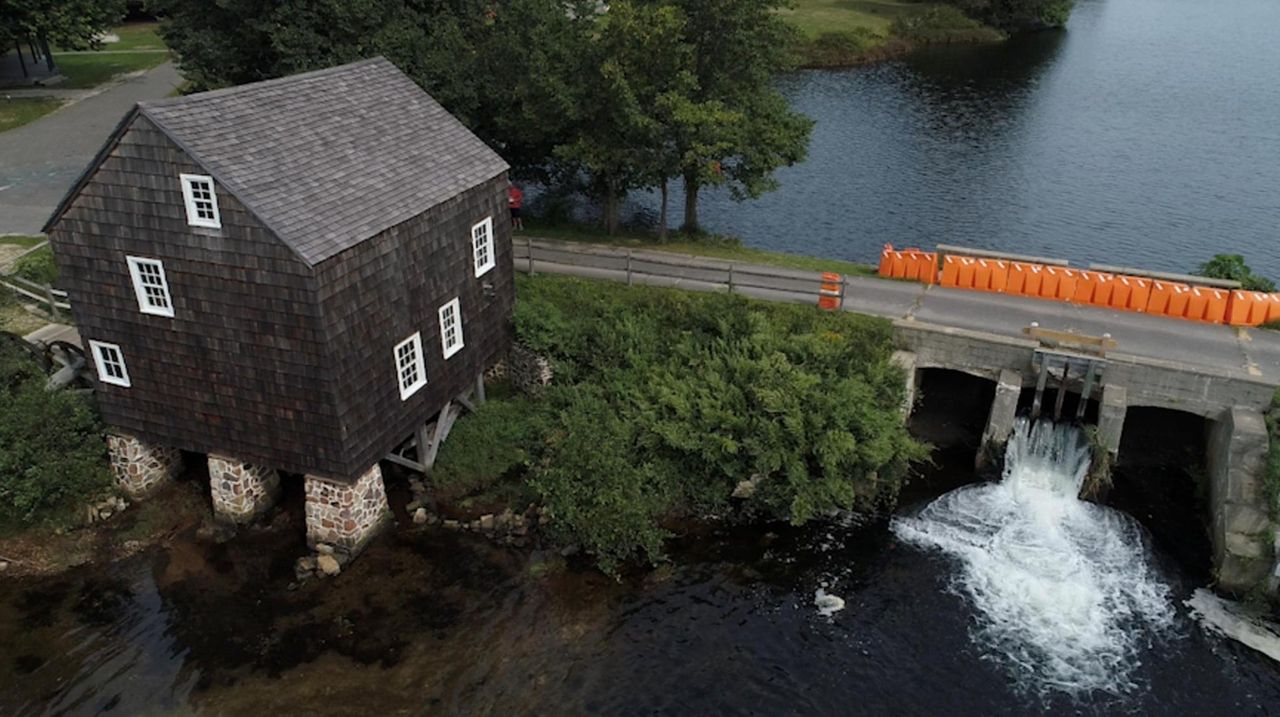 The Nicoll Grist Mill at Connetquot River State Park Preserve was restored to working order after being dormant for more than a century. John Remmer, a lifetime Oakdale resident, has devoted himself to the mill for the past two years, showing up sometimes five days a week to restore its long-dilapidated interior.  Credit: Andrew Theodorakis

On a quiet Sunday night, nestled in Oakdale’s sprawling 3,473-acre park preserve, a large grist mill that has been shuttered since the 1880s — and was on the verge of collapse not long ago — rumbles to life.

With the flip of a switch inside a three-story structure, an electric motor now brings to life the Nicoll Grist Mill at Connetquot River State Park Preserve that had been quiet for more than a century. From a pump underneath the mill, gallons of water rush down a narrow wooden gateway into a spinning horizontal wheel while two French burr stones rotate, simulating the once-thriving process used by farmers to grind wheat and corn into flour.

All around is an elaborate system — chutes, bins, pulleys, belts and cast-iron parts alongside tentering rods (which control the gap between the millstones), damsels (a type of shaft) and cranes.

Walking into the facility feels akin to time travel, though most of the machinery is the culmination of modern work to replicate the past.

The maestro behind the modifications inspects the scene.

“When I get them all moving, they do make a fair amount of noise,” says John Remmer, an electrical engineer by trade, a carpenter on the side, and a self-proclaimed “budding millwright” since 2017. “You feel like there’s action — like there are things happening here, man!”

Push to save history

Remmer, 77, has devoted himself to the mill for the past two years, showing up sometimes five days a week as he works to restore its long-dilapidated interior. It’s the final piece of what has been a major — and daunting — refurbishment by the Friends of Connetquot River State Park Preserve to turn the mill into an educational site. The nonprofit was formed in 1998 by residents and park advocates in response to a proposal to turn the property's historic Main House into a bed-and-breakfast. Believing that such a development would "ruin the integrity" of a haven for hikes, horseback riding, wildlife encounters and history, the group — now about 600 members — rescued the acreage from commercial development, according to Friends president Ginny Fields. It has since raised funds to refurbish the Main House, reopen the trout hatchery, and bring quails and turkeys back to the preserve, among several initiatives.

Since a feasibility study for the restoration of the mill in 2005, the group has poured roughly $800,000 into the project, mainly from federal, state and private grants, but also its annual galas, raffles and other fundraisers.

By the mid-2000s, the structure was rotting away from snow and rain, beetles and carpenter ants. It was in danger of caving into the river below. But with the help of architecture firm Jan Hird Pokorny Associates and WGP Construction, it was stabilized and reframed, its undercarriage and foundation rebuilt, and the doors, windows and roof replaced between 2006 and 2017.

The mill looked great from the outside, but it was an empty shell.

That’s when a lifelong Oakdale resident with a background in aerospace engineering dropped by.

“John has been what we call a mill master and kind of a hero to all of us,” said Fields, also a founding member of the Friends of Connetquot and a state assemblywoman from 2004 to 2010 who helped secure a $50,000 grant for the restoration while in office. “He’s made a tremendous difference in that building. Now the inside is almost completely rebuilt by John, and we’re all very thankful for what he’s done.”

Fields added that after a few visits to the building while Remmer worked, she discussed his work at a Friends board meeting. “I said, ‘Listen, we’ve got this guy in there paying for materials out of his pocket, willing to do everything for nothing. With our fundraising, can we reimburse him?’ So, from that point on, every time he does anything, he gives us an invoice and we pay for it.”

Remmer in the mill is like a kid in a toy store — except it’s a toy store the kid helped design, fix up, organize and continues to enhance. Making his way through the old building, which historians say was possibly built in 1751 as a sawmill and retrofitted as a grist mill in 1811, he presents his handiwork with glee and encyclopedic precision.

Remmer’s immense respect for the craftsmanship of the original builders and operators of the mill is palpable. His painstaking emulation of their techniques cranks, spins and hangs throughout the place. Remmer used 1940s photos of the mill and historical and archaeological reports to capture its original appearance. The archaeologist who composed the report had even dug test trenches on the site for evidence of materials that may have been buried. This helped Remmer to install parts. One of the original elevators used in the 18th and 19th centuries to deliver the grist to the bolter, a machine that separated meal into grades of flour, remains on the east wall; the one on the west wall was missing when Remmer started working and has since been replaced.

“I’m just amazed by the engineering and the ability of those guys and what they could make without all the fancy tools,” he said. “I’m trying to make it look like it did and make it run like it did. I want the feeling inside the mill to be like how it was when you walked in here in the 1800s.

“The miller here figured all this out more than 200 years ago and that, to me, is amazing.”

Equally amazing is Remmer’s modern-day commitment to figuring “all this out” by himself, especially considering that before his volunteer duties at the mill, he had neither experience with its complex technology nor any idea how mills worked. A graduate of Cornell University, he began his career as an electrical engineer for an aerospace company. He later formed a small electronics business and taught at Dowling College.

Remmer was no stranger, however, to the park and its historical structures, including the Main House, a former lodging for U.S. presidents and captains of industry, and the hatchery, where he fished for trout as a boy. Despite occasionally getting a peek of the grist mill when he was young, Remmer recalled that there was never much to see beyond an “abandoned building.”

But at one time, the mill stood among hundreds of other water-powered grist mills across Suffolk and Nassau, a bustling hub in the community. Today, it’s one of the last remaining mills on Long Island and one of only two horizontal-wheeled mills in New York State, according to the Friends.

“It’s part of the fabric of Long Island,” said Richard Remmer, commissioner of the Long Island State Parks Commission, vice chairman of Parks & Trails New York, a longtime member of the Friends of Connetquot — and John’s younger brother. Richard was an integral player in the restoration project from its start and previously spearheaded the installation of a fire-suppression system in the Main House. “The mill is a beautiful structure, and it’s incredible to think that it’s still standing. This is just something that needed to be done.”

Richard Remmer invited his brother to the mill in spring 2016, after the exterior work was completed. Richard wanted John’s engineering expertise about getting water to the mill to simulate its original function; since the installation of a river dam in the late 1880s, water no long flows immediately under the mill.

But John was preoccupied with his own projects: building boats and steam-bending wooden frames at the Long Island Maritime Museum in West Sayville and refinishing fences and gates at Bayard Cutting Arboretum in Great River.

It was about a year later when John made his way back to the site. While tinkering, he noticed that a black cylinder sat where a proper millstone should’ve been. It didn’t look authentic. It “didn’t cut it,” he recalled thinking.

“I got curious and felt snookered into doing a little bit here and there and making it look a little better,” John said. That led him to the library and down the rabbit hole of research.

The real turning point came, John said, when he brought his then-10-year-old granddaughter to Nicoll Grist Mill and she started asking questions. Because the building has been completely stripped by then, it was confusing — bordering on impossible — to navigate.

“This is supposed to be educational,” he recalled, reflecting on that moment. “No one could figure out what was going on here. Nothing made sense. It was just barren. That’s when I really took over, just to try and make it make sense.”

Remmer devoured every book he could find on the subject, a favorite being “The Young Millwright & Miller’s Guide,” written by Oliver Evans in 1795. Through his brother, John became aware of the Society for the Preservation of Old Mills (he’s now a member) and connected with others who have “the bug for mills,” as he put it.

One contact from Savannah, this one in upstate New York between Rochester and Syracuse, spent several days with Remmer and donated mechanical elements, including an elevator. Two other people, from Massachusetts and Virginia, visited and helped him sharpen the millstones.

He’s also traveled all over, from the Stony Brook Grist Mill to Carew Tidal Mill in Pembrokeshire, Wales.

“The reason I’ve changed jobs over the years is that as soon as I get bored, I leave,” Remmer said. “If it’s a challenge, I’ll stay. This is a challenge.”

While awed, Richard Remmer isn’t surprised by his brother’s skill and commitment.

“Our sister Karen loves to tell the story of when John was 8 years old and he converted a discarded lawn mower into a go-cart,” which drove a mile in just two minutes, Richard said with a laugh. “I think he’s married to the grist mill. His wife may be jealous!”

“He’s really recreated history there,” Wuehler said. “It’s great that we got it so far through all the grants, but John is actually bringing it to life. It’s not just a book — young people will be able to walk inside and see it at work. Because we’ve lost so much [history] and we lose a little bit every day, just to have tangible history right in front of us is a wonderful opportunity.”

Back at the mill, John Remmer points out the light fixtures above the ground floor. He hid the wiring in wooden molding, he said, to preserve the old-time feel.

But the lights are powered by a bulky electric panel that he struggled to keep inconspicuous — until he thought: “Well, the miller back then must’ve had a desk.” Using extra materials, he threw together a small desk beside the main entrance that’s equipped with a small cabinet for the panel.

“Then I’m reading something on this structure a couple days ago and it said that when you first walked in on the first floor of the mill, around to the right, the miller had a desk,” he says, gesturing to the spot where his new piece of furniture sits.

“I’m really getting into this now,” he says with a laugh.

On Columbus Day weekend, Oct. 12-14, history lovers young and old can visit Connetquot River State Park Preserve, 4090 Sunrise Hwy., Oakdale, as part of New York State’s “Path Through History” program. Each day, visitors will be teleported to the past with hourlong tours of the preserve’s three historic landmarks. Tours are free, but park admission is $8 per vehicle. For information, visit paththroughhistory.iloveny.com.

Connetquot River State Park Preserve is also offering a Haunted House Tour at South Side Sportsmen’s Club from 7 to 9 p.m. Oct. 18 and 19, for ages 7 and older. Admission is free, but reservations are required by calling 631-581-1072.