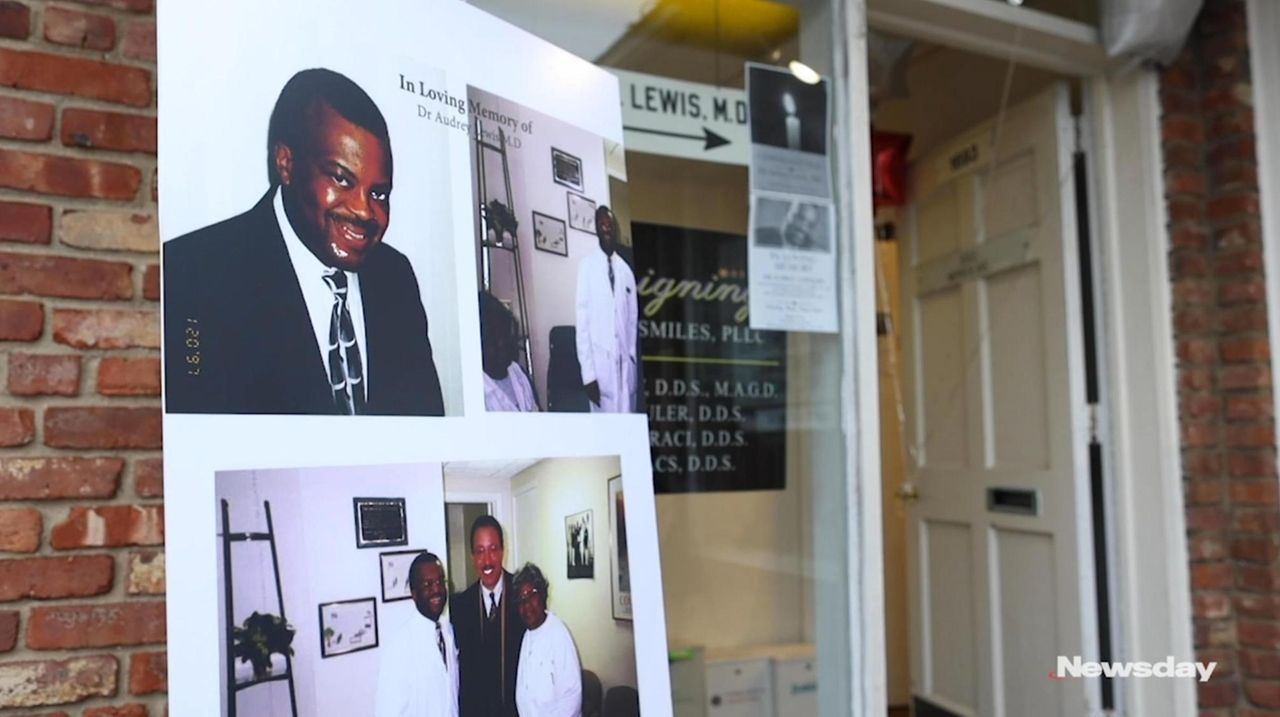 Family, friends and patients gathered at a candlelight vigil in Merrick to remember Dr. Aubrey Lewis, who passed away on January 31st.  Credit: Kendall Rodriguez

﻿About 70 people gathered in Merrick on Friday night to say goodbye to their beloved cardiologist who they say treated them like his own blood, and left behind a legacy as a champion of equitable health care for the poor.

Dr. Aubrey O. Lewis, 73, died at his Uniondale home Jan. 31. Dozens of his patients, family and friends gathered Friday night during a candlelight vigil outside a private practice he opened in 1983.

His son, Andrew Lewis, 40, of Uniondale, spoke at the vigil and told gatherers who braved the cold that although he hadn’t met many of them, he still knew them personally because his father spoke of them often.

"He looked at you guys like ... extended children because he loved you guys all so much," he said. "I’ve had so many people come and tell me that he’s extended family members lives for an additional 10 years. ... My security, my anchor is not here anymore."

Share the story of your loved ones who have passed away

Patients and politicians alike said Lewis was a security blanket for so many on Long Island, working as a tireless advocate for equal and accessible health care.

Lewis was the founder of the Community Wellness Center in Hempstead, a free medical clinic. He also founded the Coalition for Community Well Being, a group made up of doctors, medical personnel and lawyers on the Island. The group conducted free health fairs for years throughout Long Island and Queens.

The clinics were credited for properly diagnosing countless of mostly low-income people of color, with conditions such as high blood pressure or diabetes.

She spoke by phone before the vigil and said not only was he a "great cardiologist," but also a pioneer of equal health care before it was an issue commonly spoken about.

"He was always concerned about health care, especially with Black people," Goosby said. "He saved so many lives. That man meant so much to the community — to all of us."

Goosby and others also credited Lewis for publicly advocating for a hospital in Hempstead after Hempstead General Hospital closed in 2003 following bankruptcy.

In a 2007 Newsday story, Lewis said, "Proximity is key when it comes to health care, and Hempstead residents deserve a medical facility that is closer to home."

Andrew Lewis said Friday bringing a hospital to Hempstead was his father’s "dream."

The younger Lewis also told Newsday his father died from medical complications caused by exposure to Agent Orange he received while in the Army. He served two tours of duty in Vietnam.

At Friday’s event, former patients lit candles and spoke about a doctor who they said would not only treat them, but also listen and learn about their lives.

Jonathan Davis, 39, of Hempstead, said he had been a patient since he was a young teenager.

"I think we all understand that there is an important part of our lives that is not here any longer," Davis said. "We all know the standard that we want in terms of our care, now and moving forward."

According to his family, Lewis was born in Georgetown, Guyana, in 1947. He emigrated to the United States in 1969 on a student visa and joined the Army in 1970.

He graduated from Richmond College with a bachelor’s degree in chemistry, and from the State University of New York Upstate Medical University with a doctor of medicine degree. He opened his Merrick practice following a residency at the Nassau County Medical Center, relatives said.

Lewis’ viewing, which is open to the public, will be held from 10 a.m. until noon Saturday at the Carl C. Burnett Funeral Home, 456 S. Franklin St., Hempstead. The wake will be followed by a private family service.

He will be buried at the Greenfield Cemetery, 650 Nassau Rd., Uniondale.

Share the story of your loved ones who have passed awayObituaries are a valuable way to memorialize those who have died. If someone was important to you, we'd like to hear about them. Read more LI obituaries