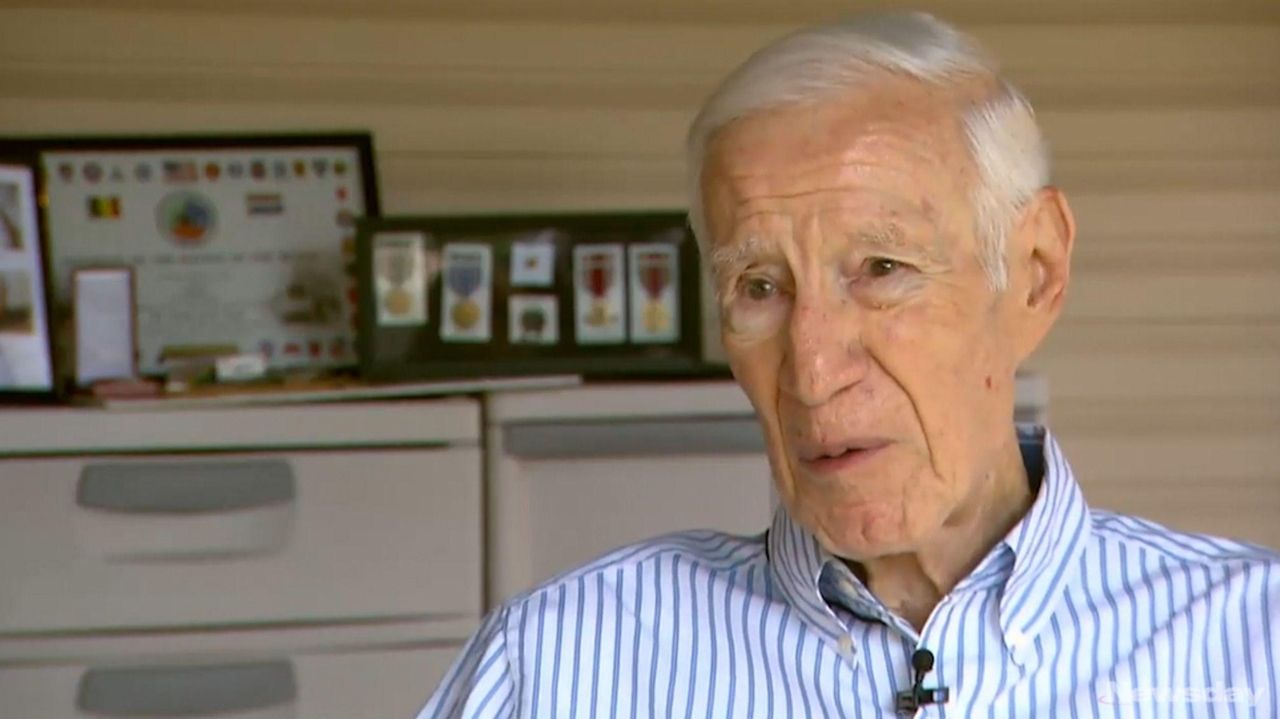 Pvt. Joseph L. Vetri, who landed at Normandy about 10 days after D-Day began, died July 6 in West Babylon. He was 92. Vetri also served as an anti-aircraft gunner defending the vital port at Antwerp during the Battle of the Bulge. He spoke to News 12 Long Island back in May 2016 about his life as a soldier. Credit: News 12 Long Island

When Pvt. Joseph L. Vetri arrived in Scotland aboard the Queen Elizabeth on a leaden morning in his 19th year, the enormity of what awaited just days hence quickly dawned on him.

Vetri, 92, who landed at Normandy about 10 days after that World War II invasion began, participated in the liberation of Paris, and later served as an anti-aircraft gunner defending the vital port at Antwerp during the Battle of the Bulge, died July 6 at his West Babylon home.

Vetri, who was known for breaking into song with favored Frank Sinatra tunes, had battled heart problems and had suffered a stroke earlier this year, said his son Bruce Vetri of Bayport.

“I’m no hero,” Joseph Vetri told News 12 a year ago. “I can tell you this, I was scared every minute of the day. You realize someone is trying to kill you — they’re not messing around.”

Hero or not, Vetri persevered through the titanic struggle that was World War II, in which more than 16 million American troops served for an average of 2 1/2 years each. Some 407,000 never made it home.

“There were times my hands would just be bleeding from all the firing we were doing,” Vetri recalled of his service at Antwerp, where he manned an anti-aircraft gun against swarms of Nazi aircraft. “But we knocked down 361 buzz bombs, 40 bombers, and we had Messerschmitts coming to strafe the troops. We did our job. We did what we were supposed to do.”

After he was honorably discharged with the rank of private in 1946, his son said, he engaged in a series of entrepreneurial ventures, including a Brooklyn camera shop, a Glen Cove photo finishing lab, and a string of Discount Palace health and beauty stores that continued to operate on Long Island into the 1990s.

In addition to his son Bruce, he is survived by his wife Johanna Vetri, of West Babylon; daughters Dara Campbell of East Northport and Barbara Gilbert, of Dallas; another son, Paul Vetri of Center Moriches; and stepchildren Barbara O’Keefe and Ronnie Kohler, both of Babylon.

His July 11 funeral included military honors. He was buried at St. Charles Cemetery in Farmingdale.

Pfizer board member: Likely no COVID-19 shot for kids under 5 until at least late March
Nassau assessments frozen for second year in a row
Hochul holding a commanding position in race for governor
PSEG puts its plan to offer $1,000 vaccine incentive on hold
Infrastructure improvements, COVID-19 boost LIRR on-time record
1:26
The school year began with rising hopes of a new normal. Then omicron hit.
Didn’t find what you were looking for?