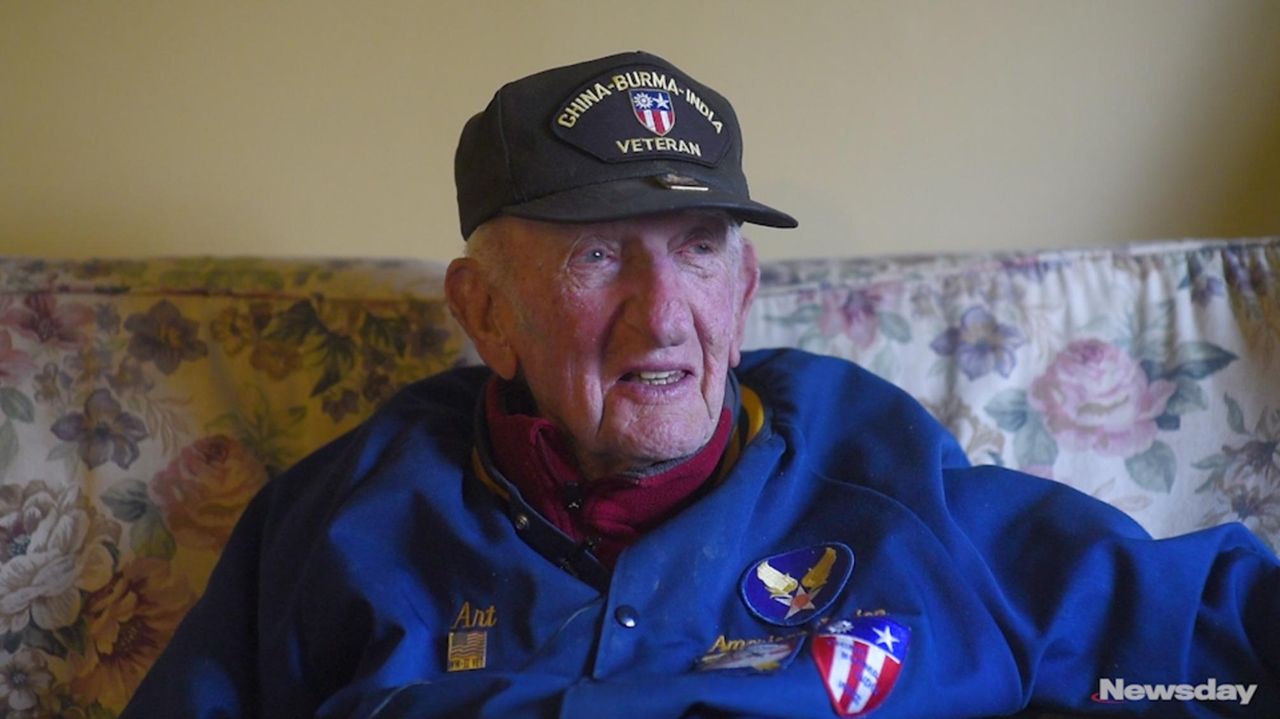 Arthur Bonne, 96, of Lakeview, who was drafted into the U.S. Army Air Forces in 1942, was stationed in India during WWII, where Allied warplanes bound for China and Southeast Asia were serviced. His assignment as a radio operator there allowed him to see an India of snake charmers, steam locomotives, artisans and extreme poverty - images he captured in drawings he sent home to his wife. Although he avoided combat, Bonne was just a few hundred feet away when a freighter carrying ammunition exploded in Bombay harbor on April 14, 1944. Bonne spoke about it on Monday, March 13, 2017. Credit: Johnny Milano) (Photo Credit: merchantnavyofficers.com

With World War II exploding across both the Atlantic and the Pacific, 1942 may not have been the best time for Arthur Bonné to be drafted into the U.S. Army. Though the timing may have been bad, his placement was pretty good.

The lifelong Long Island resident — Bonne had moved to Lakeview when he was 2 — was assigned to mostly quiet airfields in India. Spared from infantry patrols and the mortar attacks of front-line combat during his two years there from 1944 to 1946, he instead found himself immersed in an exotic culture he had barely heard of back home.

Often traveling in India’s cities and towns on a bicycle he bought there for $25, Bonne, who at the time was in his early 20s, saw architectural icons such as the Taj Mahal and the India Gate, observed sacred cows ambling in the streets and witnessed the modesty of Muslim women — one swept a veil across her face when he encountered her descending a stairway at the Qutb Minar minaret, in Delhi.

“I’d never been more than 150 miles from home in my life, and here I was in India. I wanted to see everything,” said Bonne, 96, who has never lived more than a mile or so from his current residence on Nightingale Road in West Hempstead. “It was quite a feeling.”

Bonne, a self-taught cartoonist who carried a battered range finder camera during his time in uniform, captured impressions of colonial India in the form of drawings, photographs and letters. He would scribble the drawings during downtime at the posts where he was assigned — sometimes before falling asleep, or while writing letters back home to his wife, Anna, who died in 2005. Anna tucked the artwork away in boxes, keeping it mostly safe except for the time that his young daughter envisioned the trove as her personal coloring book, and filled in one sketch in orange crayon.

Among his writings are descriptions of an overland trip north from Mumbai (then Bombay) that he said was “800 miles of monkeys and heat.” His photographs include lanky-legged camels plodding in the streets, and the 240-foot minaret — minarets are slender towers usually attached to mosques that are used to call Muslims to prayer — that soars above the 800-year-old Quwwat-ul-Islam Mosque in Delhi. His artwork includes sketches of the Bombay docks explosion, which killed more than 800 people shortly after Bonne arrived in that city in 1944, and which had showered him with flaming debris.

Bonne said his skill with radios — his childhood hobbies included communicating with other hams through an amateur radio transmitter — likely spared him from combat. Instead, he was assigned as a control tower radio operator at airfields on the Indian subcontinent.

“I knew Morse code,” said Bonne, who as an Army technical sergeant with the 124th Army Airways Communication System Squadron supervised a communications section that installed, maintained and operated radio equipment. “It was my ticket.”

WWII military service away from combat sometimes introduced GIs to cultures they had never before experienced.

Although more than 16 million Americans served in the U.S. military during the war, hundreds of thousands were assigned to such noncombat roles as aircraft mechanics, logistical specialists, payroll clerks or warehouse workers. Deployments to exotic places in North Africa, China, Micronesia or the Indian subcontinent often kept them hundreds of miles from the shooting.

Spared the tension of combat, these GIs often had the time and emotional resources to engage with local cultures almost unheard-of back in the United States, said Robert Citino, senior historian at The National WWII Museum in New Orleans.

Black sharecroppers who served in Sicily and near Naples came home having learned Italian phrases and culinary techniques. Long Island potato farmers heard tales of the century-earlier potato famine from Belfast pub denizens while stationed in Northern Ireland. Texas ranch hands, California refugees of the Oklahoma dust bowl, New England fishermen and others whose military service allowed them to closely socialize with locals in liberated France, the Philippines, Japan and elsewhere brought some 300,000 “war brides” home with them.

“That continues to intrigue me about WWII, this huge disruption of normal lives among American troops, many of which came from small-town America,” Citino said. “Americans saw things and witnessed things that they never would have seen and done had they stayed, as the song said, down on the farm.”

Contrasts with life at home

Don Kleiner, who for a while was Bonne’s first sergeant while they were stationed at an airfield in Ceylon, now known as Sri Lanka, said what he saw then provided stark contrasts with his life as a Midwesterner growing up in Wisconsin.

Kleiner recalled that shortly after arriving in India, he witnessed a turbaned snake charmer sitting cross-legged in the street and blowing a pungi as a hooded cobra rose from a basket. He said he saw the consequences of a recent famine during a stop in Calcutta, as he stepped past the corpses of starvation victims.

“It was like a dream — getting on a ship, going across a vast ocean and seeing things I had never imagined,” said Kleiner, 92, who enlisted soon after graduating from high school in Madison, Wisconsin, and after the war had a career as a customer service rep for Pillsbury Flour Mills in Minneapolis.

“All over, no matter where I went — Calcutta, Bombay, Ceylon — I saw people who were impoverished in a way you’d never see in the United States,” said Kleiner, who lives in Hopkins, Minnesota. “It made me feel really fortunate to have been born where I was.”

Bonne said colonial India’s grinding poverty — a famine in 1943 killed as many as 4 million people, and beggars accosted him in the streets — was emotionally difficult to witness. He has no interest in returning.

But he said the experience of seeing a country so unlike America remains with him.

“It was all new and different from anything I had ever seen,” said Bonne, a retired New York Telephone engineer who served as commander of the Long Island chapter of the China-Burma-India Veterans Association about 15 years ago. “So I never sat around. I went all over. I wanted to see everything I could.”