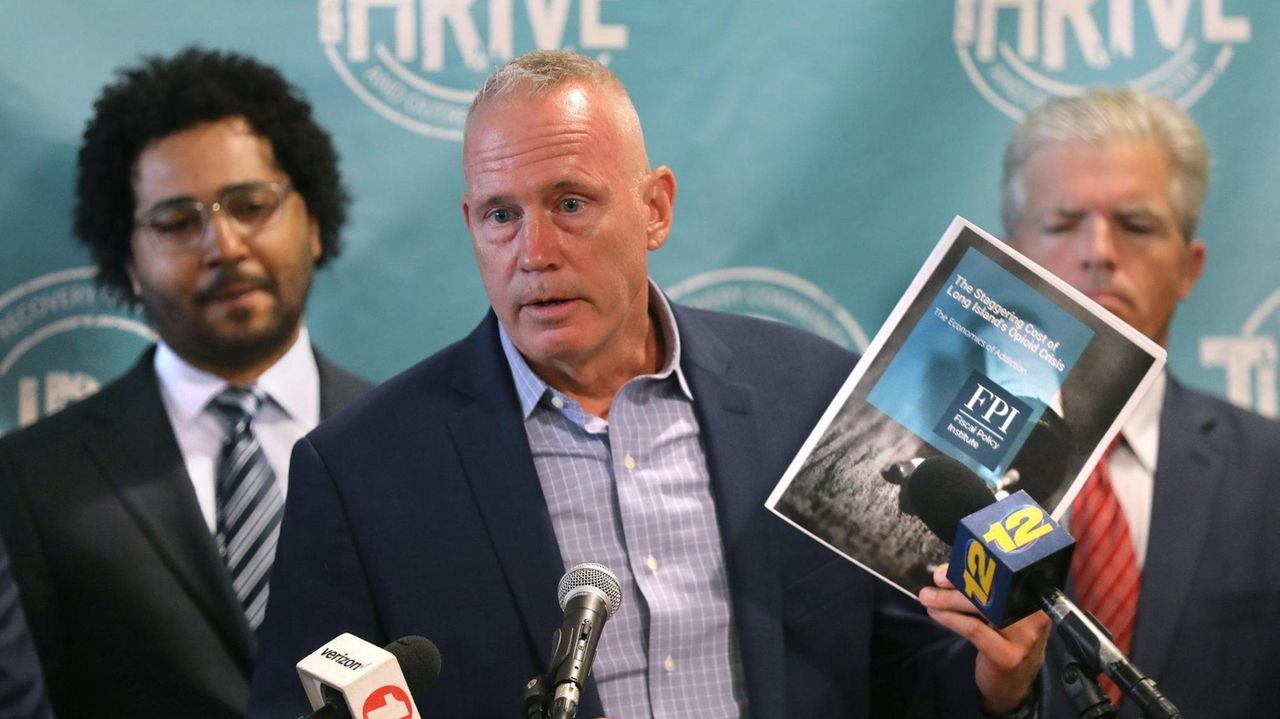 Researchers said they hoped the study, titled "The Staggering Cost of Long Island's Opioid Crisis," would make Long Islanders aware of the rippling effects of these drugs on businesses, taxpayers, emergency services, law enforcement and more.

"There is a misconception that the opioid crisis is happening to someone else," said Jonas Shaende, chief economist with the Fiscal Policy Institute, which performed the study. "That's not true. The toll on businesses is very, very high."

Researchers from the nonprofit institute said the 41-page report represents the first attempt at placing a price tag on the economic impact of opioids on the Island. In the workplace, opioid addiction reduces workers' productivity while it increases their use of health care and social services, the researchers said at a news conference at the Hauppauge drug treatment center called THRIVE.

Drug treatment advocates said the Island's business community has lagged in joining the battle. They hoped the report would make the case in dollars and cents.

"The people who haven't stepped up are corporate America," said Jeffrey Reynolds, president and CEO of Family and Children's Association.

State Sen. Phil Boyle (R-Bay Shore) said he hoped the report would convince the business community "that this is economic loss, this is money out of their pocket."

The Long Island Association, the region's largest business group, has discussed the issue in the past. It co-sponsored a forum in 2017 to call attention to the impact of opioid abuse on local communities and businesses.

“The opioid epidemic is not only ruining the lives of young people and families on Long Island and throughout the country but also our business community, where millions of dollars are lost in productivity,” Kevin Law, the group’s president and chief executive, has said. Attempts to reach LIA officials were unsuccessful Wednesday evening.

Nassau and Suffolk counties experienced 617 deaths from opioids in 2017. The crisis is largely driven by the introduction of inexpensive yet highly potent synthetic opioids such as fentanyl, the report said.

Researchers reviewed data from the Centers for Disease Control and Prevention and the New York State Department of Health.

The report estimates that 45,450 individuals on Long Island are living with opioid addiction. The professions most impacted included health care, education, retail and professional services.

Essentially, the report concluded that opioid addiction robs Long Island of an estimated $22 million a day.

The greatest economic toll comes from overdose deaths, which account for about $6.9 billion annually, the report said. With each person's death, the Island lost a lifetime of that person's earnings and spending, researchers said.

The costs of opioid addiction among the living — the lost wages, medical care and worker tardiness, absenteeism and injuries — equals $1.4 billion a year, the report said. Long Island suffered $172 million of drug-related private health care costs and $200 million in worker productivity losses in 2017.

Ryan Kiser, 35, of Central Islip, said at the news conference that his opioid addiction crippled his work life. His teen years of experimenting with alcohol and pot spiraled into a drug-addled work life dulled by hard drinking and OxyContin, liquid codeine and other opioids.

A retail data analyst, Kiser said he went through years of calling in sick, coming in late, faking doctor notes and lying to his employers. His habit of binging up to a week on drugs and alcohol sent him through four jobs. He eventually did not want to even leave the house, as his personal demons tortured him with anxiety and self-loathing, he said.

"I didn't know if the next day would come," said Kiser, who was also hospitalized after he fell off a second-floor balcony while drinking.

Two employers offered him time off to kick his addiction, but his health insurance only provided a few days of counseling, which "wasn't enough," he said.

Counseling and group therapy at THRIVE has helped him remain clean for three years. He works there now as a certified peer recovery advocate.

Nearly one in four New Yorkers reports having a family member, friend or acquaintance who has died from an opioid overdose, the report said.

The report revealed some striking facts about the Island's opioid crisis. For instance, the report found that nearly 70 percent of the opioid deaths occurred in Suffolk County. Suffolk has a slightly larger population than Nassau — 1.48 million to 1.36 million — but not enough to account for this level of difference.

The researchers refrained from speculating on the cause behind that number, saying that their research did not include that.

In addition, people ages 25 to 34 represented a third of opioid-related deaths in 2017, the highest share of the age groups, the report said.

Men accounted for 76 percent of the all opioid deaths on Long Island in 2017, the report said.

White people accounted for 85 percent of opioid deaths, the report said, while black people were 13 percent of the total.

In a news conference filled with numbers, Teri Kroll revealed the costs of an opioid death to a mother. Her son Timothy had migraines. But he hated taking pills, so he tried other things: Acupuncture. Trips to a chiropractor.

Desperate, Timothy Kroll finally saw a pain specialist. The doctor prescribed oxycodone, and Kroll got hooked. He graduated to heroin.

In 2009, four years after he first saw the doctor, Kroll died of a heart attack at home in Copiague, his mother said. He was 23.

"Society is missing an IT manager, that surfer, that uncle, and a compassionate person," said Kroll, 61, of Lindenhurst.

Her own cost is paid in different ways.

"I miss his energy. I miss his humor. I miss his smile," she said. "I just miss him being part of his family."