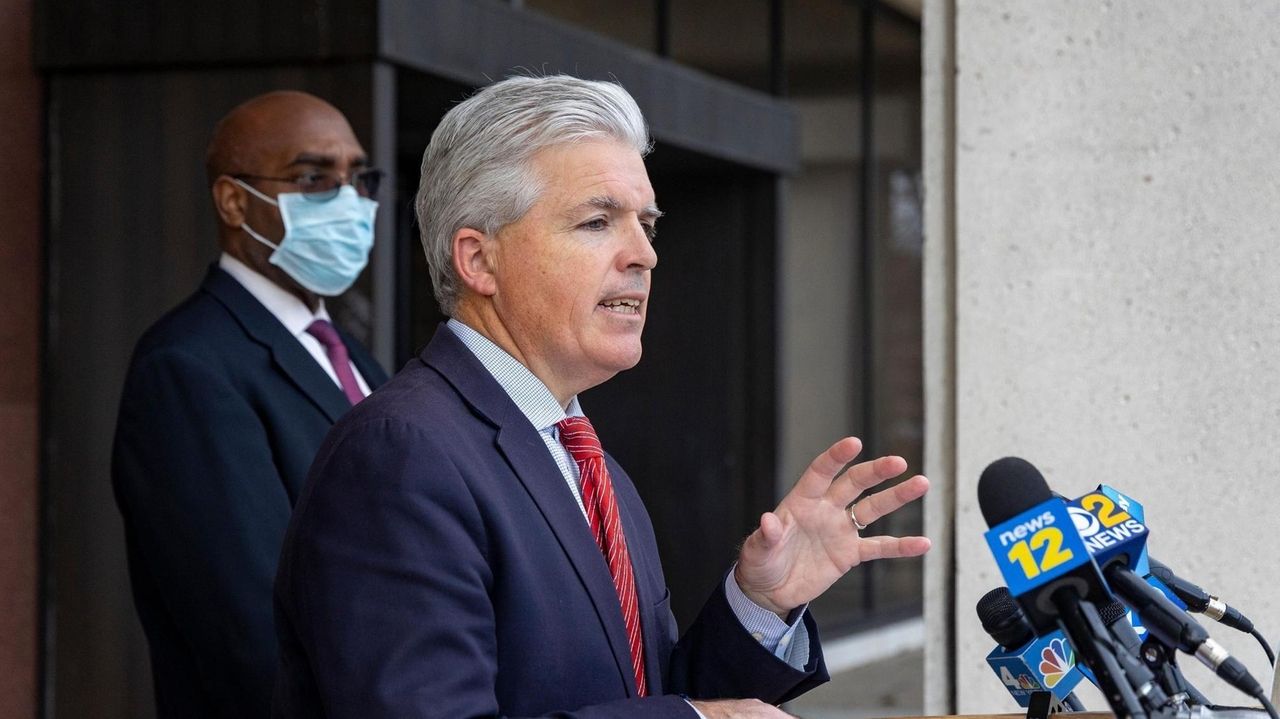 Suffolk County Executive Steve Bellone spoke about the jury vote Thursday that held Teva Pharmaceuticals USA and its affiliates liable for the opioid epidemic that has damaged or ended thousands of lives on Long Island.  Credit: Howard Schnapp

A Suffolk County jury voted Thursday to hold Teva Pharmaceuticals USA and its affiliates liable for the opioid epidemic that has claimed thousands of lives on Long Island, ending a six-month landmark trial that is expected to set a template for future settlements with drug manufacturers and distributors.

A subsequent trial will now be held to determine how much Teva, a drug manufacturer and distributor, and its affiliates will be required to pay for the destruction caused by the opioid epidemic that has ravaged communities across New York State.

Attorneys for Nassau and Suffolk counties, which pursued the litigation along with New York State, said Teva could be required to pay billions of dollars in damages, money that is required by law to be dedicated to drug treatment, prevention and education programs.

"The numbers are staggering, what it has cost our communities and what it will continue to cost our communities in New York into the future, to have effective emergency medical services for overdose victims, to have narcan available for everyone, to have the ability for individuals to enter into rehabilitation to deal with addiction," said Jayne Conroy, an attorney who represented Suffolk County, which initiated the litigation in 2016.

"They did this out of negligence and beyond that out of greed," Bellone said at a news conference in Hauppauge Thursday. "This was a big day in holding them accountable."

The case, which began with more than two dozen defendants, was the first in the nation to target the entire opioid supply chain, including manufacturers, distributors and pharmacies. Many of the original defendants — including well-known companies such as Johnson & Johnson, Walmart, Walgreens, CVS and Rite Aid — agreed to settlements before the trial began in late June, while others reached deals with the state and the counties during the trial.

New York Attorney General Letitia James said the her office has reached agreements requiring drug companies to pay up to $1.5 billion to the state.

"We took on everybody in one trial, which hadn’t happened yet," said attorney Hunter Shkolnik, who represented Nassau County in the lawsuit. "It had been more piecemeal — manufacturers, distributors, pharmacies. We chose to take them on all at once."

Attorneys for Teva declined to comment as they left Suffolk Supreme Court in Central Islip on Thursday.

Officials and addiction experts said the verdict brings accountability to drug companies but not justice to thousands of New York families that have lost loved ones to fatal overdoses.

"Today, I am left thinking about all those families that will never be whole again," James said. "For everyone who lost their life. For every parent who will never hold their child again. For every community that’s been devastated. But, today, we took a significant step in righting the wrongs this country has collectively experienced over the last two decades."

Jeffrey Reynolds, president and CEO of the Garden City-based Family & Children’s Association, which provides treatment for substance abuse, said the timing of the verdict was meaningful.

"Too many families marked the holidays without their loved ones lost to opioid overdoses and while verdicts like this will never bring those sons, daughters, sisters and brothers back, it gives families a more comprehensive picture of how the crisis came to be."

The lawsuit was jointly argued by lawyers representing Suffolk, Nassau and New York State, who told the Suffolk County Supreme Court jury that the defendants created a public nuisance by downplaying the risk of addiction, suppressing evidence about the dangers of opioids and dishonestly promoting use of painkillers.

"These are bellwether trials. They're intended to set the stage for what may happen in the future so it's not necessary to try every case in every community," Conroy said.

Attorneys for the defendants argued that corrupt doctors, pill mills, street gangs and international cartels are responsible for the opioid epidemic that devastated Long Island communities. The lawyers also pinned blame on lax regulation and said the New York State Department of Health had urged doctors to treat pain more aggressively during the 2000s.

The jurors apparently agreed with some of those arguments, since they ruled that New York State was 10% responsible for the opioid epidemic.

Suffolk County Supreme Court Justice Jerry Gargiulo said there are more than 50 counties in New York and 10 cities, including the New York City boroughs and 185 smaller municipalities including villages, towns and school districts that have sent similar cases to be heard in Central Islip.

"This court is going to hold a special conference to determine what we’re going to do about it," Gargiulo said.