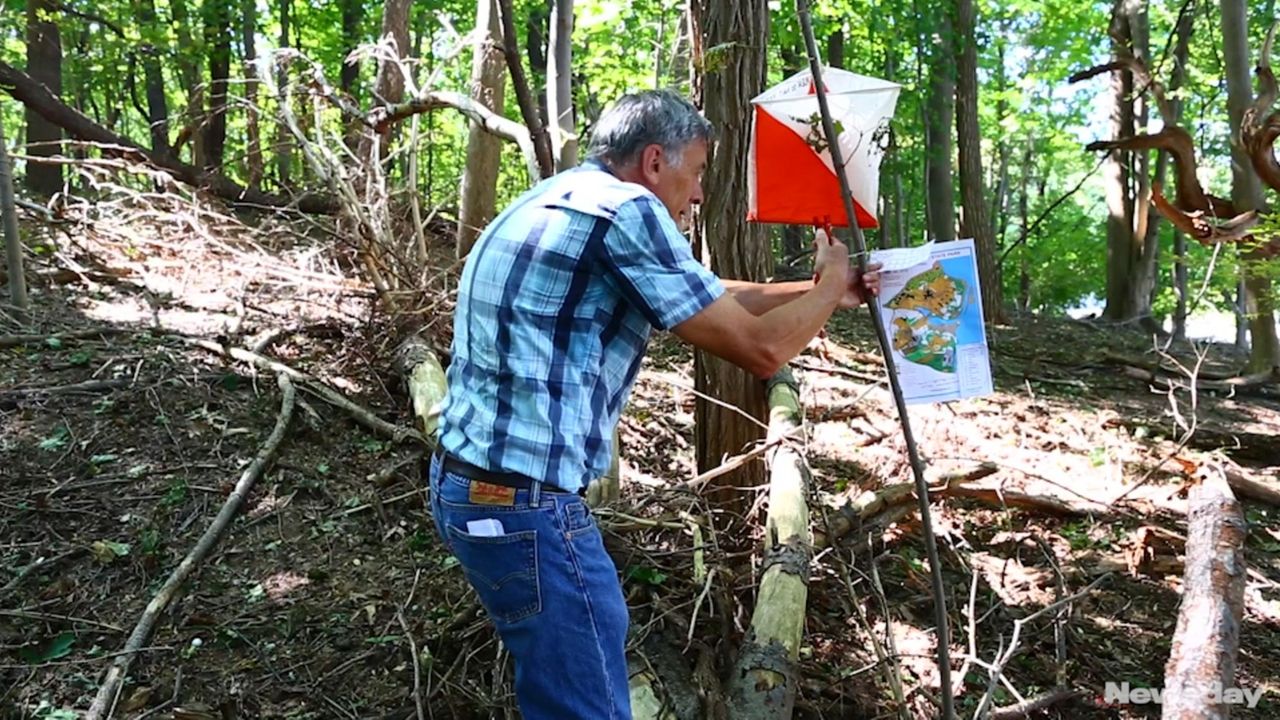 In late September 2017, the Long Island Orienteering Club hosted one of its many orienteering hikes in Nissequogue State Park. Participants relied only on a compass and map (no GPS allowed) to navigate through the nooks and crannies of the forested park in Kings Park. Credit: Newsday / Christopher Ware

Tramping uphill through ankle-high grass under a searing late September sun, one wonders if taking that narrow path off the main road at Nissequogue State Park in Kings Park was such a good idea, after all.

Especially when the man you’re supposed to be following is holding the map upside down.

But Ken Michelson, 65, of Selden, knows what he’s doing. He checks the compass that’s hanging from a lanyard on his neck; consults the map — and points toward an old stone wall on the crest of the hill. “The control point is right here,” he said. Sure enough, there it is, hanging from a bush like a Japanese lantern: The orange-and-white, triangular marker that indicates the group is on course in the Long Island Orienteering Club’s first event of the autumn.

Apparently, reading the map the way Michelson did, from south to north, is the correct way to orient yourself in the woods, which is what this sport is all about.

“We call it ‘a walk with a purpose,’ ” said Michelson’s brother-in-law, Chuck Schleifer, 58, who lives in Lake Grove. The two men are a part of a family team that has been competing regularly in the club’s events for 14 years: Michelson’s wife Cathy, 65, and Schleifer’s wife Rose, 56, are sisters. On this hike, held Sept. 24, they were joined by the Michelsons’ grandkids — Joey, 10, and Jocelyn, 4 — who accompanied them through the nooks and crannies of Nissequogue park. Together, they followed the handout map and a set of clues prepared by the event organizers, to get to 13 check points, or “controls” in the parlance of orienteering, along the 2.1-mile course. (Competitors have to punch a card at each control point to prove they were there.)

Over the years, the adult foursome has participated in club meets at Caumsett, West Hills, Sunken Meadow, Stillwell Woods, Muttontown Preserve and Avalon Park in Stony Brook. “It’s amazing to discover some of these parks we never knew,” Ken Michelson said.

The Michelson-Schleifer family members were among 91 participants in the event at Nissequogue. Unlike some of the others, though, they had a team name: IOWA, which has nothing to do with their affinity for the Hawkeye State.

“It stands for ‘Idiots Out Walking Around,’ ” Chuck Schleifer explained.

They even have T-shirts with the team name, and a team motto that, Rose promises, will appear on “the next edition” of the shirt: “Not all those who wander are lost.”

The line, from J.R.R. Tolkien’s “Lord of the Rings,” evokes Middle Earth. But the cast of the sport this day is most definitely middle aged. Long Island Orienteering Club president John Pekarik, 76, of Sayville, said well over half of the membership is 50 and over. At the Nissequogue meet, the percentage was even higher: Subtract a group of Boy Scouts from Troop 214 in Rockville Centre (who competed as part of their work toward an Orienteering Merit Badge) and the participants were almost exclusively in their 50s and older.

Many of these folks had taken roundabout routes to orienteering.

“I was always fascinated by maps,” said Marilyn MacGown, 60, of Hicksville. Growing up, she said, “I was always the navigator for my father on road trips. When I heard about this, it sounded right up my alley.”

George Seifert, 70, of Ronkonkoma, discovered it in the late 1980s, while serving as a chaperon for an overnight trip with his son, who was in high school. “I went out with one of the chaperon mothers on this thing they called orienteering,” he said. “I wanted to learn more about it.”

Seifert, a retired accountant, said he found the specificity of map reading and locating the markers (“flags,” as they’re called in this sport) was very much in line with his thinking. He and his longtime friend Rob Upson, 66, of Manorville participate in the Long Island club’s events, as well as orienteering competitions in New England and upstate New York. “This is part of how we hang out,” Upson said. “We laugh a lot, we walk, we always have fun.”

That’s how it is for most of the participants. But competitive orienteers approach it differently. They don’t walk, they run the course — and it’s generally a course that’s longer, more difficult and involving control points that are hidden more deeply in the woods than the beginner and intermediate courses. Organizers had laid out four courses for the Nissequogue event. The fastest overall competitor, 55-year-old Stefan Slutsky of Brooklyn, blazed through the competitive “Brown” course — 3.7 kilometers (2.3 miles), and 17 control points — in 34 minutes, six seconds.

The prize? “Only the fame of seeing your name in our newsletter and the website,” club secretary Glen Malings said.

There’s no taking out your iPhone and asking Siri for directions in orienteering. The use of GPS is prohibited. Instead, participants have to use a compass and read a map.

“Nowadays everybody relies on GPS,” said Malings, 58, who lives in Syosset. “They have no clue about how to navigate using a map and compass. We teach it and that’s part of the fun.”

Originally developed as training for Swedish Army officers, orienteering became, and remains, popular in Scandinavia and northern Europe. In the United States, however, it has long been a fringe sport. Why that is, isn’t exactly clear: What kid doesn’t like running around the woods looking for clues? The Michelsons’ grandkids and the Boy Scouts at the club’s Sept. 24 event certainly seemed to be enjoying the challenge. Ken Michelson said there was an added bonus: “It beats having them sitting inside playing with the smartphone.”

For most adult competitors, part of the satisfaction is successfully navigating the terrain. “I still like the thrill of figuring out how to get to the next control point and coming over the hilltop and there it is, just where it’s supposed be,” said Kris Beecroft, a two-time member of the U.S. national team, who is now president of Orienteering USA.

But it’s also beneficial for older competitors in other ways. “It’s an outdoor activity, first of all,” Pekarik said. “And you can do these courses fast or slow. We have some older people who just like to go for a walk in the park, and we have some dedicated outdoor enthusiasts, as well.”

Despite their self-deprecating name, Team IOWA, which finished the intermediate 2.1-mile Nissequogue course in a time of one hour, 32 minutes, gets the best of both worlds from orienteering: They enjoy a vigorous walk in the woods, while using their noggins to find the control points and appreciating parts of the park that are quite literally off the beaten path.

For example, a staircase to nowhere near the southeastern tip of the park. Once, these steps, constructed with carefully inlaid stones, must have led to something grand; perhaps the residence of a doctor or administrator of the psychiatric hospital that once stood near here.

“That’s what’s great about this sport,” Schleifer said. “They give us this cool, detailed map, and you get a chance to explore this amazing park.”

And not get lost in the process.