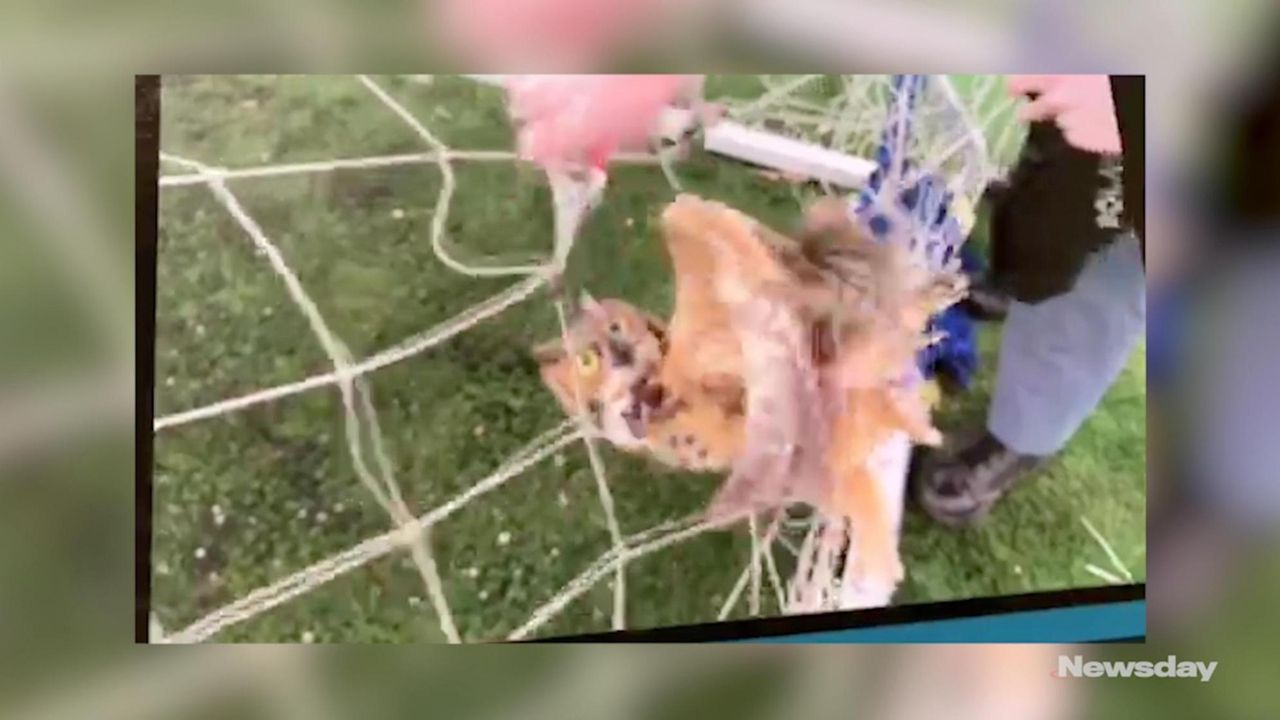 Park police officers at Brentwood State Park last Sunday rescued an owl that had flown into and got stuck in a soccer net.

Dream of an owl and it will become your guardian, the Lenape Indians believed, but this great horned owl was the one that needed a protector.

The owl had flown into a soccer net and got stuck last Sunday at Brentwood State Park. Workers who discovered its predicament ahead of a morning match alerted park police officers who freed it after about 10 minutes of cutting through tangled string, first covering its head to keep it calm.

“It looked like it probably tried to fly and snatch some prey, got his head through a couple of the strings, and as he tried to escape, his wings got ensnared, his feet got ensnared,” Park Police Officer Dan McCarthy, 34, said by telephone on Friday. The great horned owl “was pretty well ensnared,” McCarthy said

Great horned owls, whose ear tufts resemble horns, weigh about 3 pounds when fully grown; their wingspan can be as wide as 5 feet, according to the state Department of Environmental Conservation. Night hunters, they prey on small mammals and birds, and roost in a variety of places, from hollow trees to abandoned squirrel nests.

While freeing the owl, McCarthy wielded a knife and then clippers; his colleague, Park Police Officer Steven LoDolce, 31, told him where to cut. The process required more than a little analysis because the string wrapped around the struggling bird had to be sliced away without harming its feathers, eyes or talons.

Referring to LoDolce, a canine officer, McCarthy, said: “He was like the brains of the operation.” Jesting, McCarthy added: “He was probably really good at untangling his Nintendo controls as a kid.”

“For a while, we had something covering his eyes; he was a lot more amenable to being handled” until it fell off, McCarthy said.

About a foot long, the owl, possibly a male, “behaved himself,” said McCarthy, who was keenly aware that its talons and beak are formidable weapons.

“I don’t think any of us wanted to get wrapped up in his clutches; he wasn’t really being too aggressive, he was kind of hissing at us, but not trying to fight us.”

The last few moments of the rescue were caught on a video.

The great horned owl hangs upside down until McCarthy frees its left wing; the bird then twists so it is right side up.

His big yellow eyes stare intently at the clippers as the last string is cut away.

“Go that way, dude,” McCarthy says, nudging the owl gently with his foot to make sure he is finally free.

Apparently uninjured, the owl flies off — without a backward glance.

“I think we were happy too; it was definitely a fun call, a little something different," McCarthy said. "He looked happy for the most part.”

CORRECTION: An earlier version of this story had an incorrect location for the owl rescue.