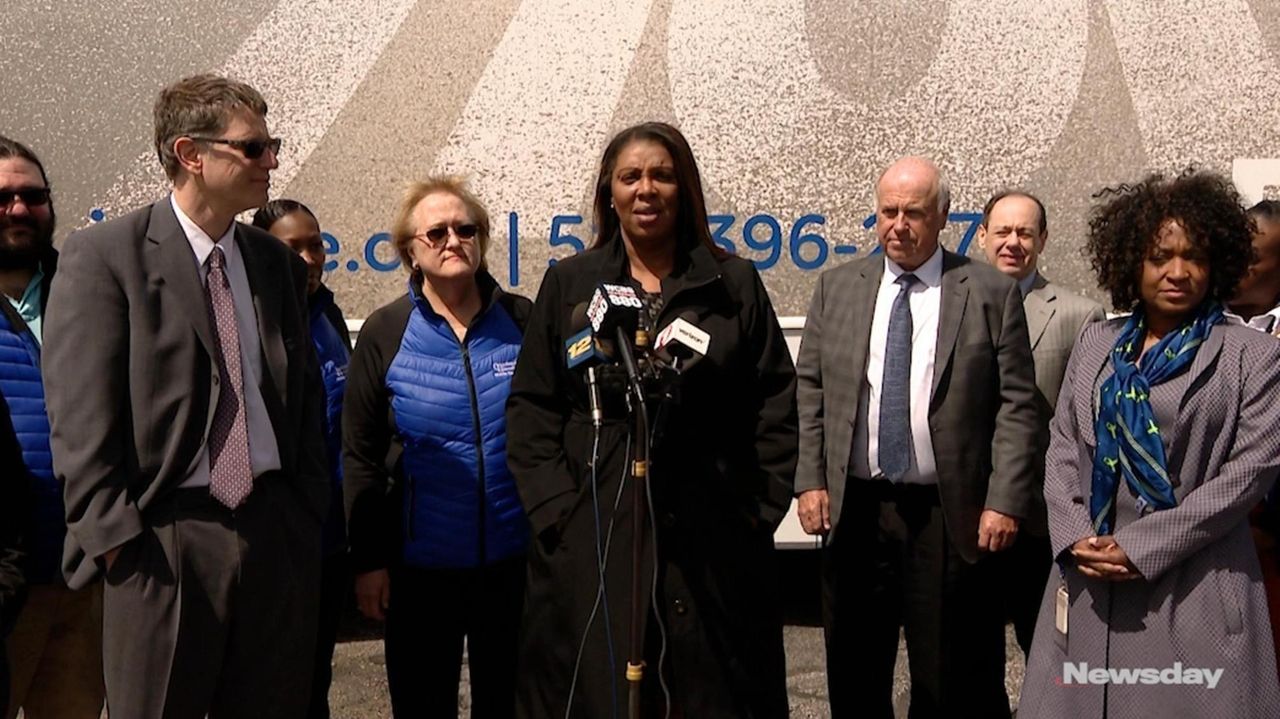 On Wednesday, New York State Attorney General Letitia James spoke outside a drug-treatment center in Hicksville about the wealthy family whose company manufactures the powerful painkiller OxyContin, and the need for them to be held accountable for the opioid epidemic. Credit: News 12 Long Island

The wealthy family whose company makes the prescription painkiller OxyContin must answer for an opioid epidemic that has killed nearly 3,700 in Nassau and Suffolk since 2010, New York Attorney General Letitia James said Wednesday outside a Hicksville drug-treatment center.

James’ criticism of the Sacklers, owners of Purdue Pharma, came two weeks after she targeted the family in a lawsuit, accusing them and others of fraud and being "masterminds" behind the statewide opioid epidemic.

“It is critically important that as we proceed with this litigation that we hold those who are responsible for the epidemic, that we hold them accountable” James said during a news conference outside Central Nassau Guidance and Counseling Services.

Her predecessor, Barbara Underwood, initially filed a lawsuit in August, accusing Purdue Pharma of fraud as well as deceptive marketing in pushing addictive painkillers and igniting the epidemic. James' March 28 filing expanded the earlier suit to include the Sacklers and other companies while accusing nine family members of transferring money to private and offshore accounts to shield the funds from litigation.

James said she wanted to visit the mental health and substance abuse center "to see what treatment looks like.” It is critically important to provide funding and support to treatment facilities to ease the suffering caused by the opioid epidemic, the attorney general said.

“I want everyone to know that there are some people here on Long Island that will provide you service,” James said. “The doors are open 24 hours, seven days a week. They are nonjudgmental. It is a place that provides healing, where you can get recovery, a place where we can support you as you get back on your feet.”

Nearly 218,000 people died in the United States from overdoses related to prescription opioids from 1999 to 2017, according to the federal Centers for Disease Control. Fatal overdoses declined in Nassau and Suffolk in 2018 for the first time in years.

Representatives for the Sackler family and Purdue Pharma declined to comment Wednesday, referring reporters to a statement issued after James filed the amended lawsuit. In the statement, the Sacklers denied the allegations included in the James' complaint and called the latest law a “misguided attempt to place blame where it does not belong for a complex public health crisis.”

Underwood filed the initial lawsuit in Suffolk because it is among the counties statewide hit hardest by the opioid crisis. Separately, Nassau, Suffolk and dozens of other New York counties, have filed similar lawsuits against drugmakers in connection with opioid abuse. Suffolk was the first county in the state to do so, and the second nationwide. The New York counties' lawsuits have been wrapped into a single filing to be initially heard in Suffolk. After a judge resolves pretrial issues, the cases will return to their home jurisdictions for trial.

“I know we have had people who have been saved with Narcan 11 times,” Friedman said. “Getting Narcan out there has saved lives but it hasn’t changed how people behave.”

James and Friedman spoke next to the facility’s mobile recovery unit, a large recreational vehicle that serves as a rolling treatment center. Friedman said staff used the mobile recovery unit to meet with people at homeless centers, soup kitchens and other places those struggling with substance abuse congregate.

"With the attorney general coming to visit us today," Friedman said, "we can get the word out that everyone can recover."