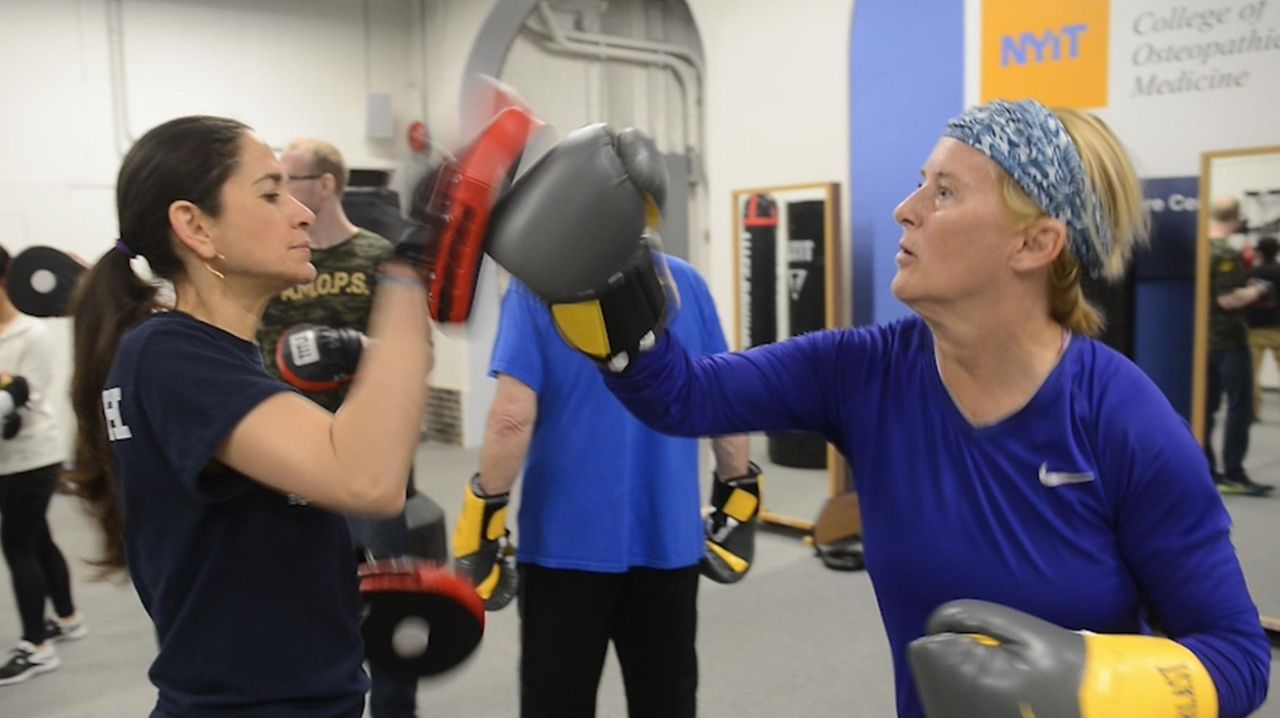 Who hasn’t dabbled in a bit of self-diagnosis and treatment to cure what ails us?

Have a headache? Take some aspirin and lie down.

Feeling queasy and lightheaded? Sip some ginger ale, nibble on crackers and lie down.

Battling Parkinson’s and losing muscle strength and mobility? Don’t lie down. Take up boxing, minus the body blows.

That’s what Rosilind Drukker did, after convincing her board-certified neurologist to take a certification program to bring the Rock Steady program to New York Institute of Technology in Old Westbury.

“I lost my handwriting when I was first diagnosed,” said Drukker, 61, who lives in Dix Hills and learned she had the degenerative disease in 2010. “About a year or two later, movement became very difficult. That is what Rock Steady has helped me with. It’s helped me move a lot quicker and without the terrible aches.”

Rock Steady is a noncontact boxing program founded by former Indiana prosecutor Scott Newman after he was diagnosed with Parkinson’s in 2006. The organization became a national phenomenon over time, and patients and doctors alike took interest in the program.

Exercise plays a fundamental role in the treatment of Parkinson’s, a neurodegenerative disease that erodes parts of the brain associated with motor control. Patients slowly lose control of their body as the disease progresses. Approximately 1 million people in the United States have Parkinson’s, and 60,000 are diagnosed each year, according to the Parkinson’s Disease Foundation.

Physical therapy can delay or even prevent the disease’s effects in some cases, but many physicians find it difficult to hold their patients to strict therapy regimens.

Adena Leder, a neurologist and movement disorders specialist at NYIT College of Osteopathic Medicine, was Drukker’s doctor. She took her patient’s advice, attended a certification program last May and uses Rock Steady to empower her patients in the treatment of their condition and help improve their quality of life.

“A lot of Parkinson’s patients don’t want to do physical therapy because it makes them play the ‘sick’ role,” Leder said. The program, which began in September with five patients and has grown to nearly 90, “gives them somewhere to go,” she said. “Many of these patients are socially isolated, and some of them don’t leave their house. Many of them have formed bonds with one another, and they’ve made connections.”

Patients get referrals from their doctors or hear of the program through word-of-mouth. Rock Steady sessions are held Mondays, Wednesdays and Fridays for the advanced class, which Drukker attends. A modified class meets two days a week. Neurologists screen patients before they start boxing to assess which class they should join.

In the program, the patients are referred to as boxers, have their hands taped and are fitted with gloves. They strike punching bags and “focus mitts” donned by the staff, who are referred to as “cornermen.” To improve mobility, they also do two-handed rope exercises and lift 12-pound exercise balls.

Leder said NYIT staff supervises the boxers to ensure their safety at all times. The environment, and the language, are designed to keep the participants empowered. Student assistants from NYIT help maintain that environment. Kirtan Patel, a student at the NYIT College of Osteopathic Medicine, said student volunteers work to individualize each boxer’s workout, and try to group participants by their ability.

“It’s really cool to have some students really get to know the boxers and help out specific patients,” Patel said. “They get a lot more focused when we do that.”

Leder said that the NYIT program is in high demand and that she is working to increase the number of classes offered.

“We have a patient who was extremely dependent on a walker, and for the last few classes he walks in by himself,” Leder said. “That’s a marked change from where he started.”

Boxing has been linked to the onset of Parkinson’s in the late and legendary fighter Muhammad Ali and in Hall of Fame coach Freddie Roach, who has trained more than two dozen world-champion boxers and battled Parkinson’s since 1992.

Yet the same sport tied to the disease has become one of the most popular means of managing its progressive and debilitating effects, which include tremors, problems with balance, slurred speech, stiffness and slowness. That might seem counterintuitive until you consider what the disease and boxing have in common: movement.

Boxing is a sport involving near-constant motion. Athletes must be alert, quick, agile and able to withstand blows to the torso and head to emerge victorious. Hand-eye coordination, balance and strength are essential skill sets.

The Parkinson’s Disease Foundation describes the neurodegenerative brain disorder as “a chronic and progressive movement disorder.” The cause is unknown, but has been linked to genetic and environmental effects, such as a relative with the disease or toxins. Boxers are thought to have developed the disease as a result of the trauma sustained from heavy, repeated blows to the head.

At Higs Gym in Central Point, Oregon, owner Byron Higinbotham offers the Rock Steady program and is a proponent of its effects.

“With boxing, your brain is constantly engaged in the process,” he said in an interview in February. “The Rock Steady Method is retraining the brain to communicate with the body.”