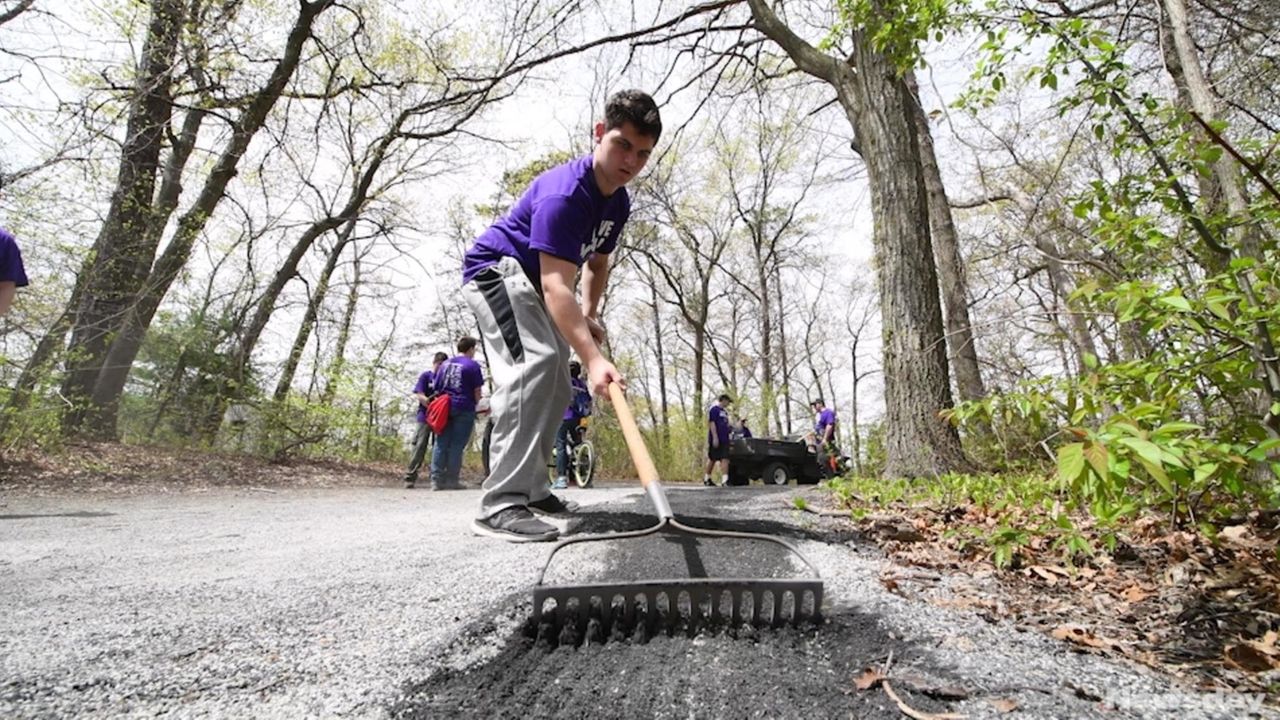 Volunteers across the state and on Long Island took to their parks Saturday, picking up trash, painting bike racks and trimming brush for the seventh annual I Love My Park Day, a statewide initiative in which thousands of volunteers help prepare state parks and historic sites for the season. Credit: Newsday / J. Conrad Williams Jr., Keshia Clukey

Thousands of volunteers across the state and on Long Island took to their parks Saturday, picking up trash, painting bike racks and trimming brush for the seventh annual I Love My Park Day.

“It shows the kids how litter impacts their environment, and adults, but it’s great to have so many Scouts, and high schoolers and junior high and elementary school kids out here,” said Bill Brown, Hempstead Lake State Park manager.

There were 8,000 volunteers at the more than 135 participating state parks, historic sites and national parks statewide, including 1,800 volunteers on Long Island, said Alison Jenkins, executive director of advocacy group Parks & Trails New York, which works with the state on the event.

About 130 people preregistered to help with the park cleanup in Hempstead, which focused on Northeast Pond, Brown said. The pond is fed from street runoff, so it’s the most heavily littered in the park, he said.

Mary Beth Malone, who volunteered along with her daughter and members of Malverne Girl Scout Troop 2567, said she was appalled by all the trash.

“You could spend months here,” Malone said. “You can’t see the ground. This bothers me.”

Her daughter Emma, 10, eagerly ran around picking up everything from food containers to bottles, and even found a whole pineapple.

“I don’t like when people litter,” Emma said. “It’s bad for the country and the U.S.A. There’s a lot of pollution that the animals can eat, and it can make the animals sick.”

Hempstead High School math teacher Aziz Elmrini brought a group of ninth-graders to clean and help make the park “accessible again,” he said. The day in the park also serves as a good math lesson with the slope of the pond and the volume of the water filling it, Elmrini said.

One of his students, Tikerra Moore, 15, of Hempstead, said she “didn’t know the park was here,” but now that she does she wants to bring her younger sister.

The participation in I Love My Park Day at Belmont Lake State Park has tripled in the past few years, said park manager Joe Brodtman. More than 125 volunteers participated Saturday, he said.

A lot of Boy Scouts groups attend to get their community service hours, but there’s also a large contingency of local residents, he said. “They’re our daily users.”

This was Aidan Johnson’s second year participating in the park day at Belmont. He spent most of the day trimming back brush around the trails.

“You don’t want to see garbage in the parks,” said Johnson, 14, of North Babylon, who volunteered along with other members of Boy Scout Troop 175. “If we keep up with this, we might have a chance of preserving it for what it should be.”

For John Smith, 36, of East Meadow, Saturday was a chance for him and other members of The Church of Jesus Christ of Latter-day Saints in Plainview to volunteer their time.

“We get to utilize these beautiful parks all the time,” Smith said, adding that his children often go to Belmont Lake. “I like the opportunity to keep the parks nice and give back.”