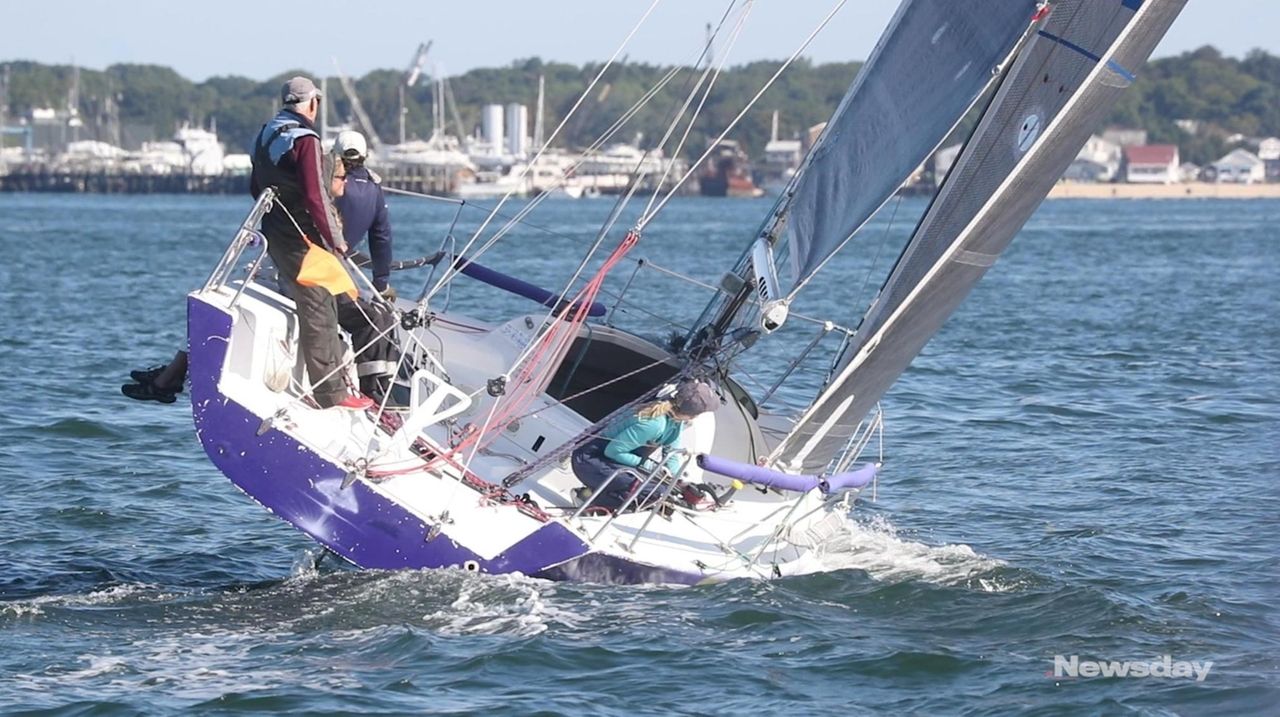 Capt. Pat Mundus knows that in the eyes of many she is best known as the daughter of Frank Mundus, the late Montauk shark hunter said to be the inspiration for the character Quint in “Jaws.”

“There is not a day that goes by that someone doesn’t ask me about my father,” she said.

Yet Pat Mundus, 61, of Greenport, long ago stepped away from the shadow of her larger-than-life father, charting a course as a sailor and a ship officer that defied her parents’ wishes and society’s expectations of women of her generation.

“I did what I loved,” Mundus said. “I followed my passion.”

Today, Mundus, who captains yachts and owns a charterboat company, takes advantage of her years of experience negotiating the still-male-dominated sailing world by mentoring young women in the field, giving them the help, advice and instruction that no one provided her when she was starting out.

Mundus was one of three daughters of Frank Mundus, a renowned charter fishing boat captain who “was quite disappointed he didn’t have a son.”

Her father was known on the East End for exploits that included harpooning a 4,500-pound great white shark off Amagansett and whose clients included Peter Benchley, the author of the novel “Jaws,” which was adapted into the 1975 blockbuster movie of the same name.

“Deep down inside he really thought that all I was going to do was just go off and get married and have children and that was going to be the end of it,” Pat Mundus said as she sat earlier this month in her living room near Greenport Harbor, the sea, as always, not far away. “I had to struggle with my father to be taken seriously.”

Mundus said she “nearly got kicked out of the house when I told him I wanted to sail instead of work on powerboats and go fishing.” Her father viewed fishing as a practical way to make money, she said. Sailing, he believed, was merely something rich people did for fun.

‘There was no support’

At age 17, Mundus flew to the Caribbean to learn sailing. She was frustrated that veteran sailors taught and mentored young men, but not young women. One day, an oil-tanker captain she was chatting with in a bar told her that maritime academies had started admitting women. He suggested she enroll in one of them to get the training she needed.

Mundus earned a bachelor of science degree in marine transportation from SUNY Maritime College in the Bronx in 1981, only a few years after women were admitted to U.S. maritime schools, and a third mate’s license from the U.S. Coast Guard.

Mundus was still in college when in 1980 she met and fell in love with Earl Vorhees Jr., who later became her husband. After graduation she got a job aboard an oil tanker, which meant half the year — for 60 to 90 days at a time — she was at sea, and half the year she was at home with Vorhees in East Hampton.

“He was an incredible women’s advocate, super secure in who he was himself,” she said of her husband, who died in 2013 at age 78. “So he was never threatened by the fact I was [sometimes] the only woman aboard for two or three months at a time. And he was a great sounding board. He helped me figure out a lot of things.”

Mundus sailed the world on the tankers and often was the only female officer on the ship.

In the era before #MeToo, sexual harassment on ships was common, especially in her early years at sea. Many men did not want to work with women, she said. They told dirty jokes in front of her, peppered their speech with crude sexual language and sometimes even walked around naked “because they knew it would make me feel weird,” she said.

“There was no support,” Mundus recalled. “You couldn’t go to the captain because he would say, ‘Hey honey, if you don’t like the heat, get out of the kitchen.’ They wanted you to quit. You couldn’t go to management because the captain wouldn’t support you. It was their word versus your word. And there’s nothing worse than going back into a team setting as a whistleblower. I’m sorry to say, but a lot of it we dealt with with our own two hands.”

In her first year aboard tankers, that included punching a man in the face after “he was putting his hands all over me,” Mundus said.

Empowering, and inspiring, others

To this day, one reason Mundus uses “Pat” in business situations instead of “Patricia” is because “Pat” is a unisex name.

“When I use the word ‘Pat,’ a lot of people assume it’s a guy and they immediately pay me the attention that is due,” she said. “When I’m the captain of a yacht and I pull alongside [the dock], nine times out of 10, the people on the dock look at any guy on the boat — it doesn’t matter who it is — and they assume he’s the captain.”

After men see she knows how to sail skillfully, they give her respect, she said.

“I’ve learned over the years to win respect though my actions and my competency rather than my words,” she said.

Mundus left her oil-tanker job in 1997, after 17 years, because the Lyme disease she had for years became more debilitating.

She now runs East End Charters, which handles boat charters for her 57-foot-long yacht and for six vessels owned by others. She’s had three captains for her yacht. The last two have been women, as will be the captain next summer, her 20-year-old niece, Luna Crowley.

Crowley is one of several women whom Mundus has mentored on sailing skills over the past few years during months-long winter trips to the Caribbean.

“I love working with young women, because of that one time when they say, ‘I can do this,’ ” Mundus said. “It’s so exciting to see them get empowered.”

Two years ago, Crowley, of Chelmsford, Massachusetts, boarded the yacht with limited sailing abilities. Mundus was a “really patient but really stern” instructor who greatly increased her skills, Crowley said. Next month, she will take a Coast Guard captain’s license exam. She called Mundus — and her perseverance and determination — an inspiration.

“She is just a woman who is very influential to other people in a very positive way,” Crowley said. “She’s definitely been a large component in my growth into adulthood and a really amazing mentor in not only sailing but in how to be a person, how to be an adult, how to make decisions. And how to be a badass woman.”