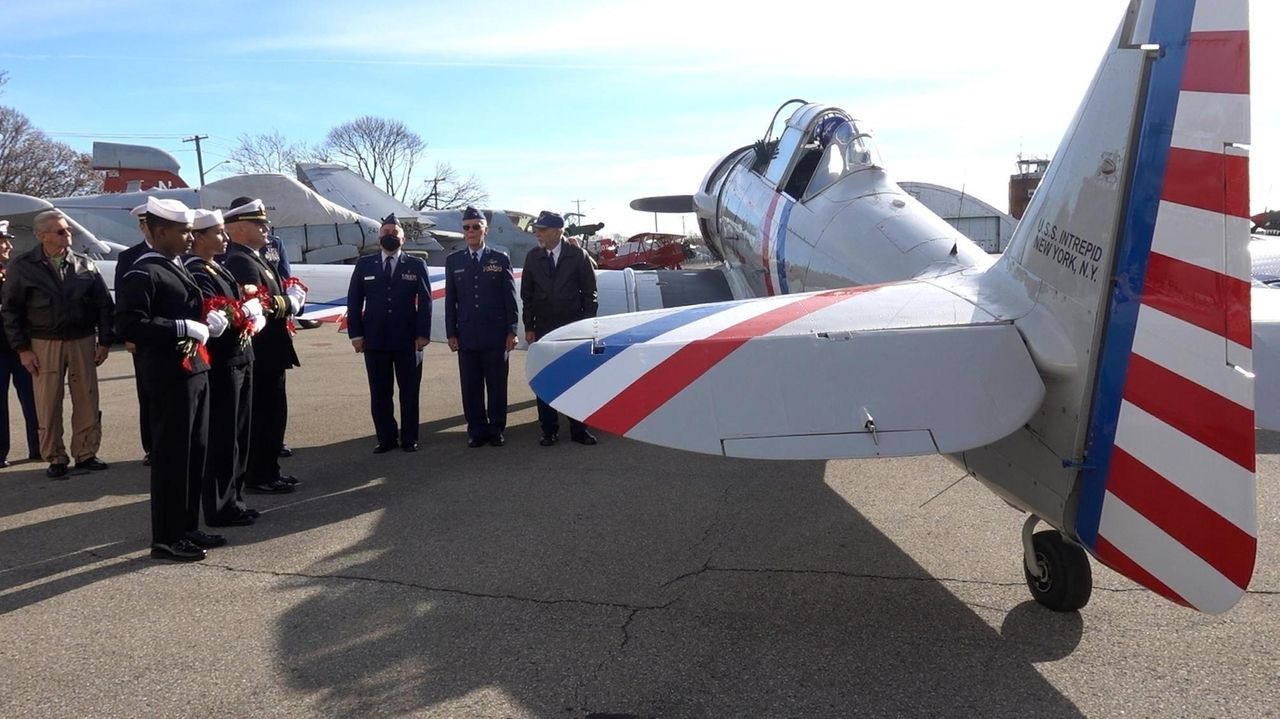 His recollections of Pearl Harbor are a bit hazy, but for Bud Rosch, 101, of Bethpage, the lessons of the war endure 80 years later.

"When the Japanese attacked us, it made me angry," said Rosch, a U.S. Army sergeant whose plane was shot down over Italy in 1944. "It’s important people remember the war so we don’t have any more wars again."

Rosch and other World War II veterans commemorated the 80th anniversary of Pearl Harbor on Tuesday at the American Airpower Museum in East Farmingdale.

Veterans and organizers at the Airpower Museum continued the tradition of dropping roses over the waters around the Statue of Liberty.

Air Force Lt. Col. Brian McNamara, chaplain of the 106th Rescue Wing, blessed 80 red roses to signify each year that has passed since the Pearl Harbor attack and to remember those lost. A single white rose was also dropped to mark the Sept. 11 terrorist attacks.

Servicemen carried the roses in a procession to a waiting T-6 Texan propeller plane, then flown to the Statue of Liberty where the flowers were dropped at 12:55 p.m. Eastern time to match the moment the attack began in Pearl Harbor, 7:55 a.m. Hawaii time on Dec. 7, 1941.

"Each year we recognize that if not this for this date we wouldn’t be here," the museum’s operations manager Larry Starr said. "The attack on Pearl Harbor thrust America into a world conflict it didn’t want to be involved with to begin. On Dec. 8, millions of men were ready to serve their country."

Suffolk County Executive Steve Bellone said veterans of Pearl Harbor are still coming home. On Saturday, Patchogue native Kenneth Jane’s remains were returned — 80 years after he was killed in an attack on the USS Oklahoma.

"The fate of this nation does rest upon the idea we always will remember," Bellone said. "Remember the sacrifice, remember the service that has made this country what it is today.

As the Greatest Generation of war veterans dwindles with time, those who served said it’s important to pass along the history of the defining moments of the war to future generations.

David Marshall, 97, of Baldwin, said he was 16 when the nation was attacked. He joined the Army and eventually fought in the Battle of the Bulge and two battles in Germany.

"I didn’t think it affected me [but] it eventually caught up to me," Marshall said. "Pearl Harbor made us one, and it’s never been the same since. I feel good we haven’t forgot what happened. We should remember what brought us together and today we do not have that unity."

Leonard Finz, 97, of Manhasset, wore a blue pin on his World War II hat that says, "Remember." He recalled the declaration of war after Pearl Harbor as a day that "will live in my memory forever."

The next year he was drafted into the Army and eventually became one of many soldiers on a boat ready to make landfall in Japan, before the bombing of Hiroshima and Nagasaki prompted Japan's surrender.

"In those days we were united fighting for our beloved country," Finz said. "Today causes us to remember we must never forget Pearl Harbor … We are a vanishing breed."