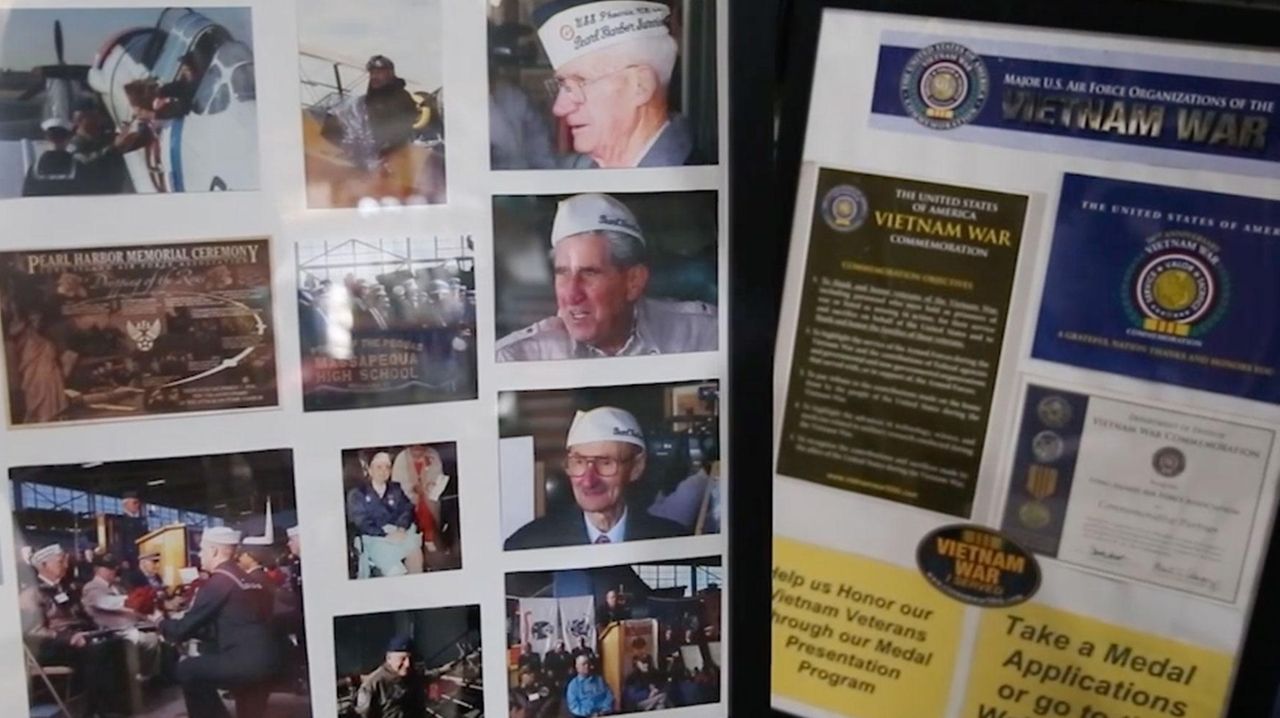 Few people knew what Joseph Hydrusko did at Pearl Harbor on Dec. 7, 1941, or that he would drop roses into New York Harbor from the cockpit of his private plane every year. His plan was to ensure that the 2,335 American military personnel who died during the attack would never be forgotten. Bill Stratemeier and Fred DiFabio of the Air Force Association on Thursday discussed how they keep Hydrusko's tradition alive.   Credit: Newsday / Shelby Knowles

There are few people who knew Joseph Hydrusko, what he did at Pearl Harbor on Dec. 7, 1941, or that he would drop roses into New York Harbor from the cockpit of his private plane every year. The mission was to ensure that the 2,335 American armed forces personnel who died during the worst military attack on American soil would never be forgotten.

Even the Long Island Pearl Harbor survivors who helped him commemorate that day, including one he helped save from the battleship Oklahoma, are gone.

On Friday, local members of the Air Force Association again will gather near the Republic Airport tarmac to make sure Hydrusko's commemorative mission goes forward. It was near that tarmac in 1983 that the former Massapequa restaurant owner died afer his plane burst into flames.

A plane bearing 77 roses will fly from the airport in Farmingdale to the west, aiming to drop the floral cargo near the Statue of Liberty at 12:55 p.m., the time the attack on Pearl Harbor began 77 years ago.

“He was quite the hero that day — we can’t forget,” said Air Force Association member Bill Stratemeier, a Vietnam War cargo pilot. “We have to keep the memories alive.”

Hydrusko, who initiated the rose-dropping ceremony around 1970, did all he could to keep his fellow sailors alive that day.  American troops stationed  in Hawaii were still eating breakfast when more than 350 Japanese warplanes began attacking U.S. military installations on Oahu.

Hydrusko was aboard the hospital ship USS Solace when waves of Japanese aircraft began dropping bombs and torpedoes onto the ships. He commandeered a launch, or motorcraft, and sped  around the blazing lagoon, plucking seaman from the oil-slicked waters as best he could.

He would say later that one of his most haunting memories was hearing the frantic tapping of men trapped in the USS Oklahoma, which was hit by several torpedoes,  with much of its crew below deck. More than 400 sailors were killed.

Hydrusko, who owned Dick and Dora’s Italian restaurant before he died, is credited with saving some two dozen people.

“I remember one sailor sitting against a davit, one of his feet sheared off at the laces,” he told Newsday in 1981. “I got him into the launch.”

He also plucked badly burned men from the lagoon. “They were stripped to the waist and couldn’t take the wind and the spray . . . They looked normal, but you could peel all the skin from their bodies. I told them to get down low in the boat. Some of them died.”

One of those he rescued was Michael Savarese, of Lake Grove, who died in 2000.

“When I found out about this guy, I said, ‘I’ve got to meet him,' ” Savarese told Newsday in 1976, and who the year after Hydrusko died honored him by showering the harbor with roses from the back seat of an open-cockpit biplane.

Japan wanted to wipe out America's Pacific fleet in a single day to claim military primacy in the Asia Pacific, as well as unchallenged access to oil, rubber and other raw materials needed by Japan's military machine.

Of about 100 warships docked  in Hawaii, 21 were heavily damaged or destroyed, as were 323 American warplanes, according to the National Parks Service, which maintains the Pearl Harbor memorial site. There were a total of 2,403 Americans killed, and 1,143 wounded.

A wrinkle of fate spared two ships that were normally in Pearl Harbor and were among Japan's most coveted targets.The USS Lexington had left Pearl Harbor three days earlier to ferry warplanes to Midway Island. And the USS Enterprise, which was scheduled to have already arrived, was delayed by a storm.

Their survival allowed the United States to pivot from 19th-century battleship designs, and to remodel its naval forces around aircraft carriers and smaller, swifter ships more suitable to modern warfare.

Japan's attack also ushered in America’s reinvention from a reflexively isolationist nation to one that now has troops deployed around the globe.

Fred DiFabio, whose organization will host the ceremony at the American Airpower Museum in Farmingdale before the rose-bearing plane lifts off, said honoring the sacrifice of those who were at Pearl Harbor is essential to America’s character.

“I really do consider them the last great generation, because of their honor and fortitude and desire to serve their country,” said DiFabio, president of the Long Island Air Force Association.