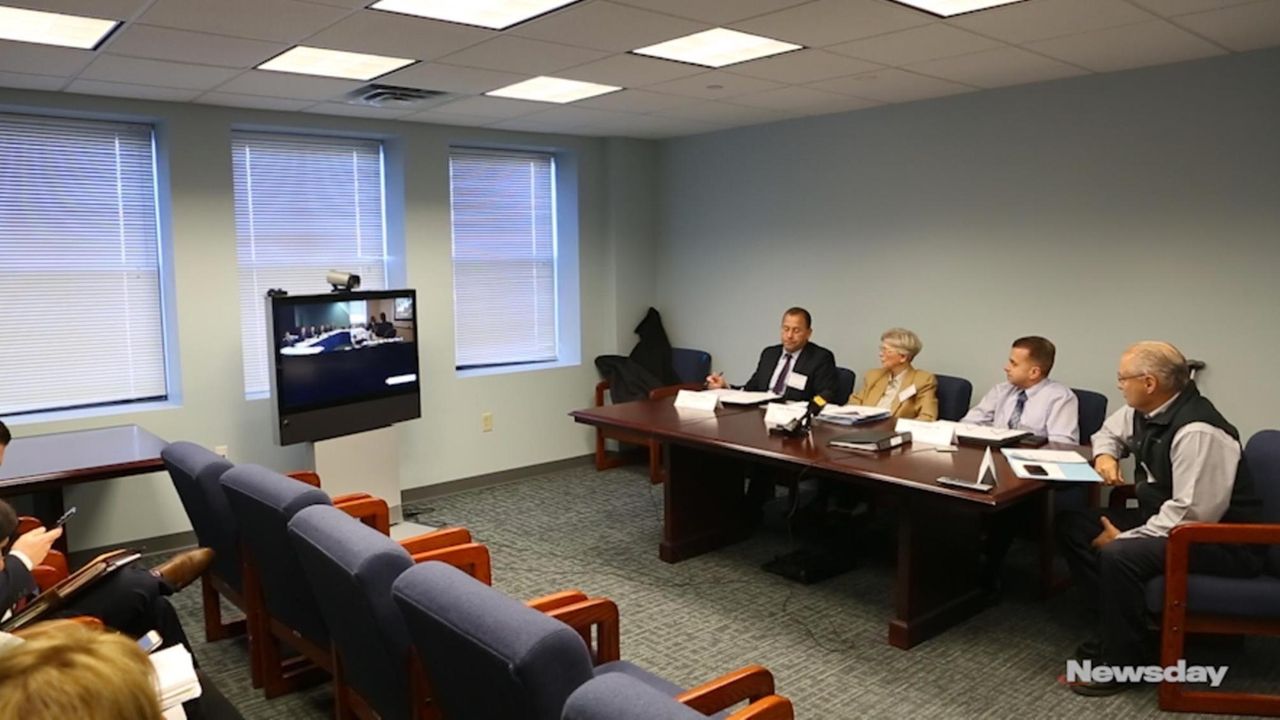 On Tuesday, a state panel recommended new drinking water standards for maximum levels of three contaminants associated with manufacturing, firefighting foams and household products in what would be some of the most enforceable drinking water standards in the nation. Adrienne Esposito, executive director for the Farmingdale-based Citizens Campaign for the Environment, explained how this will help make drinking water safer on Long Island. Credit: Newsday / Shelby Knowles

A state panel recommended Tuesday new drinking water standards for three contaminants associated with manufacturing, firefighting foams and household products in what would be the most stringent regulations in the nation.

The maximum allowable standards for the chemicals, some of which have been detected in Long Island's drinking water, would require drinking water providers to regularly test for and filter them to the standard or below.

They also would come with a price: more than $1 billion to treat the compounds in capital costs statewide, plus millions of dollars a year in operations and maintenance, according to state estimates presented Tuesday.

The 12-member board — made up of academics, health and environment officials and water providers — set a level of 10 parts per trillion for PFOA and PFOS; and 1 part per billion for 1,4 dioxane.

After debate on issues such as public health, costs to water providers and the technical challenges to detect the contaminants at low levels, the state Drinking Water Quality Council recommended maximum contaminant levels for perfluorooctane sulfonic acid (PFOS), found in firefighting foams; perfluorooctanoic acid (PFOA), used in manufacturing and stain-resistant carpets; and 1,4 dioxane, which is found in paint strippers, solvents and household products.

The man-made 1,4-dioxane has been found in trace amounts throughout Long Island’s drinking water, with the highest detection in the nation measured at a well in Hicksville. PFOS has been detected at Gabreski Air National Guard Base in Westhampton Beach, near a fire training academy in Yaphank and near East Hampton airport.

The council's meeting was held Tuesday afternoon jointly in Central Islip, Albany and New York City via video conference. The recommendations will be considered after a public comment period by state Health Commissioner Howard A. Zucker, who abstained from voting on the recommendations. Final implementation is expected next spring or summer, according to state health department officials.

At the standard recommended by the council for PFOA and PFOS, the state estimated 23 percent of public water wells in New York would need treatment. The cost of that is $855 million in capital costs and $45 million a year in annual costs.

For the level set for 1,4 dioxane, the estimated cost is $318 million in capital costs to treat 89 wells, most of which are on Long Island. Annual costs would be $13 million, according to the state.

Stanley Carey, superintendent of the Massapequa Water District who's also a member of the Long Island Water Conference, which represents water providers, voted against both standards.

"I'm not sure everyone understands the implications to the public water suppliers," said Carey, also chairman of the Long Island Commission of Aquifer Protection. Beside the cost, he said, the standard used to prevent 1-in-a-million cancer risks with 1,4-dioxane is stricter than what's used for other chemicals, like volatile organic compounds.

Paul Granger, another council member who's head of the Port Washington Water District, voted for the PFOS and PFOA recommendations, but against the lower 1,4-dioxane standard.

"It's about the feasibility. Of course we want things to be the most protective, but there are only a certain amount of resources available," he said.

Sarah Meyland, a council member and professor and director of the Center for Water Resources at New York Institute of Technology, had advocated for stricter standards but in the end supported those that passed.

"I would've liked us to get the lowest numbers possible," she said. "But we got pretty close. We had nothing before."

The water quality council was mandated under state law in 2017 to recommend standards for the chemicals after environmentalists and New York State-elected officials complained that the federal process was taking too long.

The standards were not as strong as those recommended by some environmental advocates in New York, but many called the action a good beginning.
"Long Islanders have the right to expect clean water, and today's vote brings us a giant step forward to that goal. This is an exciting and meaningful public health victory," said Adrienne Esposito, executive director of the Farmingdale-based Citizens Campaign for the Environment.

Robert Hayes, clean water associate for Environmental Advocates of New York, called the recommendations "a very good start." Hayes said his group has urged the council to set a level for PFOA and PFOS at 4 parts per trillion, and 1,4-dioxane level at 0.3 parts per billion.

The EPA has established a health advisory level of 70 parts per trillion for PFOA and PFOS in drinking water, though a separate federal report this past summer found the chemicals dangerous at much lower levels.

New York State announced in October $200 million in grants to help communities remove the contaminants from drinking water, including $14.25 million for projects at the Bethpage Water District and in Suffolk County.

According to the EPA, exposure to PFOA and PFOS may result in adverse health effects, including testicular and kidney cancers, liver damage and developmental effects to fetuses or breast-fed infants, such as low birth weight and accelerated puberty.