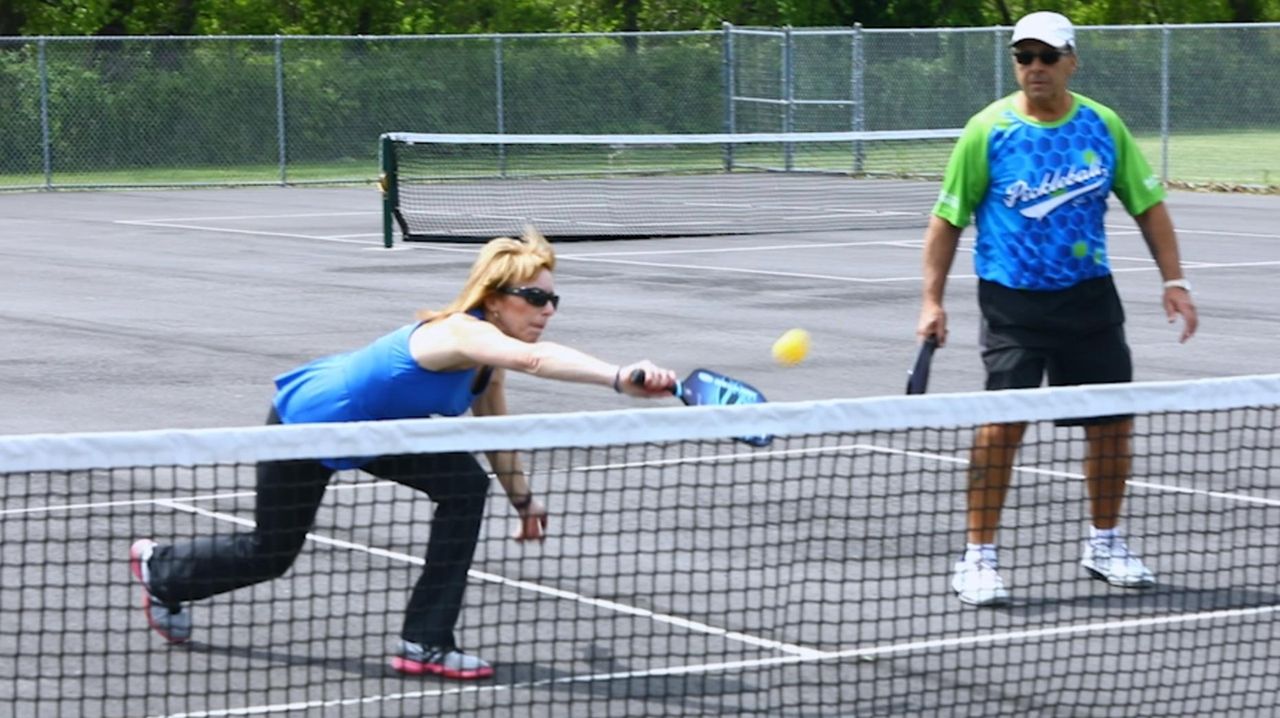 Pickleball combines the concepts of tennis, badminton and pingpong, and is played in doubles format on a court about a third of the size of a tennis court. Most people play because they enjoy the exercise and social aspects, but on Tuesday, May 16, 2017, USA Pickleball Association Metro District Atlantic Region district ambassador Jones Wong said there is a growing contingent of elite, competitive players of all ages who compete nationally. Credit: Newsday / Jeffrey Basinger

For more than 40 years, Vincent Colonna of Lake Grove demonstrated his prowess on racquetball courts, winning countless trophies and medals in sports competitions. But after knee replacement surgery in 2015, Colonna feared that his athletic days were over.

Instead, Colonna, now 66, found a new activity for his skills: pickleball, a game gaining enthusiasm among boomers and older adults who want to exercise but may not have the speed and agility — or the desire — for overexertion.

How pickleball got its name depends on which internet story you believe, but there’s consensus that the game was started by Joel Pritchard and friends when he was a Republican congressman from Washington State in 1965. It is a blend of badminton, pingpong, tennis and racquetball, played on an area that’s one-third the size of a tennis court; equipment includes lightweight paddles and Wiffle-type balls.

Jones Wong, 63, who promotes the game as an unpaid district ambassador for the USA Pickleball Association for Nassau County and the five boroughs of New York City, estimates that there are more than 600 seniors who play pickleball on Long Island. “Most of pickleball is senior-driven, but when they show their grandkids [how to play the game], it becomes intergenerational.” said Wong, a retired pharmaceutical executive from Merrick, who is a pickleball instructor.

His first encounter with a pickleball paddle was seven years ago in Arizona, where he has a second home. Wong said he plays in parks and indoor courts all over Long Island. “Game basics are easy to learn,” he said, noting one of the reasons the sport has become popular. “Most pickleball players are happy to show and/or explain them to you.”

Colonna’s racquetball experience made for a short learning curve when he decided to give pickleball a try. Since taking up the sport, he has scored eight medals in pickleball competitions, including the mixed doubles gold at the Pompano Beach Pickleball Classic in Florida this year, and the mixed doubles bronze at the New Jersey Senior Olympics last September. Both events were won with teammate Linda Cappello, 59, of East Hampton.

Of all his pickleball competitions, Colonna most fondly remembers last year’s Riverhead Open. It was his first pickleball tournament — and triumph, as well as his first win with Cappello. “I was still new to the game, but after winning, I felt like I had found my niche,” Colonna said. Retired since selling his floor covering business in 2009, he now plays pickleball five times a week.

From Hempstead to the Hamptons and regardless of athletic ability of players who are embracing the sport, pickleball is increasingly the choice of boomers, officials said. “The big part of pickleball are the connections, friendships and fun,” said Susan Kaminsky, 58, a Subway franchisee and one of USA Pickleball Association’s Suffolk ambassadors. The organization has volunteers across the country who are charged with spreading word about pickleball.

It takes 11 points to win a game, which lasts 20 to 30 minutes. Older players can engage in multiple matches of doubles within a two- to 2 1⁄2-hour stretch. But often, players show up unexpectedly at Long Island’s public parks, so everyone takes a turn rotating into the game — which gives all participants a chance to play and to socialize.

“It gives you camaraderie, and doesn’t have the pressure of tennis, where some games can go on for three hours,” said Rena Rosenfeld, 69, a Sag Harbor resident who winters in Miami Beach. A friend with whom she plays pingpong introduced Rosenfeld to pickleball four years ago, and she and Cappello have since become the pickleball association’s Hamptons ambassadors. “I want to play pickleball until I’m on the other side of the grass,” Rosenfeld quipped.

Despite its growing popularity, pickleball is still unknown to many. According to the Sports & Fitness Industry Association’s 2016 Single Sport Participation Report on pickleball, only 2.5 million out of 322 million people in this country play it. (In contrast, 18.1 million played tennis last year, according to the association.) Nationally, the 55-and-older crowd represents 75 percent of pickleball’s 930,000 core players, defined as individuals who play at least eight times a year.

Barry Simonson, 58, an orthopedic surgeon in Great Neck, said pickleball enables seniors to stay active and is less physically demanding than racquetball or tennis. In addition, he said, pickleball can potentially ward off mental deterioration by helping to keep blood flowing to the brain.

While many play pickleball for pleasure, Cappello, Colonna’s teammate, embraces its competitive side. She was a marathon runner before that sport took a toll on her lower back and legs. Three years ago, while in Florida, she saw Rosenfeld teaching pickleball to a group outside a gym.

“Everyone was laughing, and it looked liked fun,” Cappello said. “That was the beginning for me.” Since learning the game, she has won 11 competitions in women’s doubles contests and with Colonna in mixed doubles tournaments. Intent on becoming a top-rated player, Cappello keeps in shape with bike riding and weightlifting. In winter, when she’s in Florida, she trains with a pickleball pro. As the chief financial officer of a Manhattan graphics design firm, Cappello said she can do much of her work remotely, which allows her to play the sport three hours a day, five to six days a week, and enter up to 12 tournaments a year.

“It’s addictive because of the game and the social interaction,” said Cappello, who counts 30 new friends because of pickleball, including Colonna and his wife. “You become part of a pickleball community that keeps expanding.”

WHAT YOU NEED Paddle prices start about $18 for aluminum models; upper-scale composite metals can cost $129. A six-pack of Wiffle-type pickleballs can range between $7.50 and $20.

WHERE TO LEARN Jones Wong, a district ambassador for the USA Pickleball Association, recommends going to the organization’s website, usapa.org, and finding an ambassador in your area who will know about lessons.

The Town of Hempstead offers classes in summer, which are already booked, but Wong suggested “calling up for future availability and checking with other municipalities.”

An increasing number of adult education programs in various school districts (such as the Bellmore-Merrick Central High School District and the Commack School District) can provide some basic instruction, Wong said. “Also, inquire at your local recreation centers and indoor tennis facilities about lessons.”

If you’re looking for someone to play with, USAPA also has a look-up service for members. Annual membership is $20.

WHERE TO PLAY Most indoor and outdoor facilities on Long Island do double-duty as tennis and pickleball courts, with tape or painted lines delineating each sport. Before playing in a public park, ask the local municipality whether there’s a residency requirement.

In Suffolk, Whitman Park in Melville has four pickleball-dedicated courts, as well as two older courts with lines for pickleball and tennis. The Village of Patchogue has pickleball markings on two new courts on Rider Avenue.