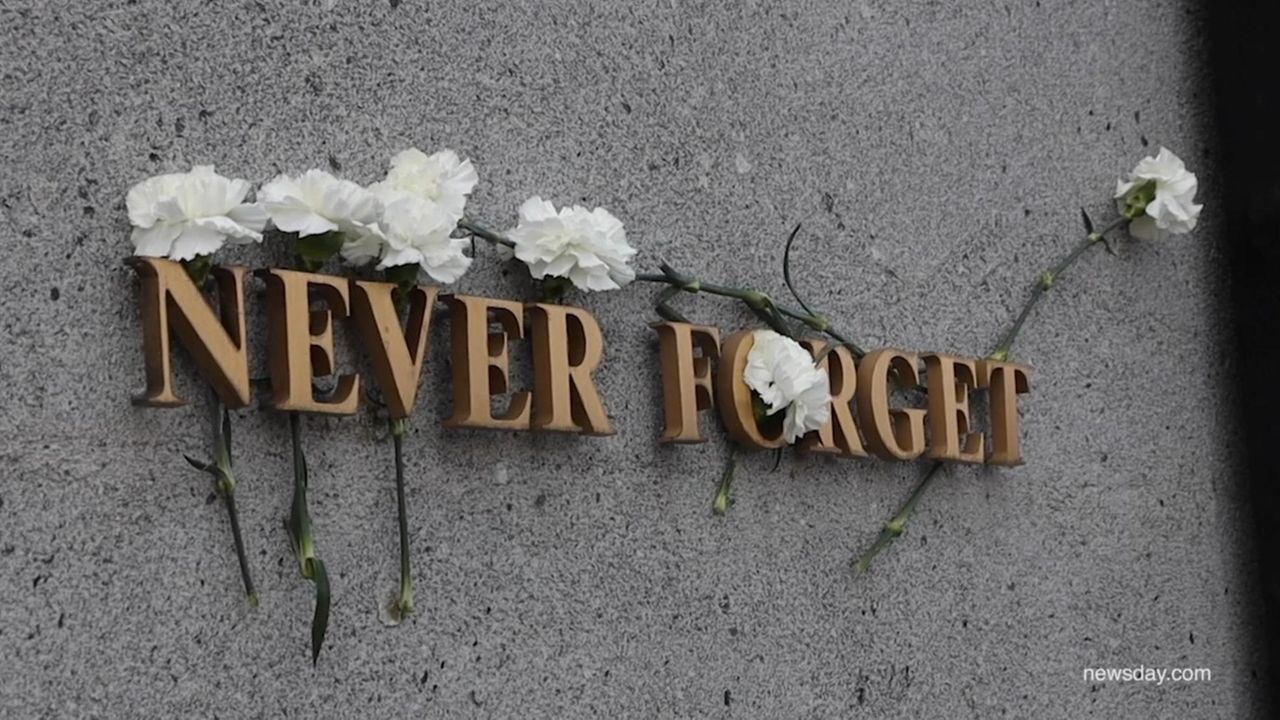 Nineteen years after the 9/11 terror attacks, Long Islanders honored loved ones at the annual ceremony at Town Park at Point Lookout. Residents paid tribute with music, white carnations and a message of unity. Credit: Howard Schnapp

This story was reported by John Asbury, Robert Brodsky, Mark Harrington and Nicholas Spangler. It was written by Brodsky

Across Long Island, from Point Lookout to Riverhead, hundreds gathered while social distancing and wearing masks Friday to honor the nearly 3,000 lives lost 19 years ago in the World Trade Center attacks.

Ceremonies — some in person and others held virtually because of the coronavirus pandemic — dotted the Island, which lost nearly 500 residents on Sept. 11, 2001. Remembrances marking the somber anniversary were also held in Lynbrook, Huntington and Massapequa, while Suffolk County hosted its event remotely.

While the ceremonies had a different feel than previous years', they were no less emotional for the families still mourning the lives cut short on that Tuesday morning in September.

Hundreds converged early Friday morning, mostly in their vehicles, at the Sept. 11 memorial at Point Lookout for a drive-in ceremony.

"Point Lookout was a focal point in so many people’s lives for reflecting," Clavin said. "When 9/11 happened, so many residents walked down to Point Lookout beach and looked to the west and saw the smoke rising."

Oceanside and Rockville Centre firefighters played bagpipes and presented a color guard that played “God Bless America” and “Amazing Grace” before ringing a firemen’s bell in a moment of silence. Officials laid a wreath at the memorial wall, and visitors were handed carnations to lay at the wall or take onto the beach.

Ladder trucks, parked facing the ocean above the memorial, hung a large American flag as firefighters stood above a wall of names of those who perished in the attacks or later died from 9/11-related illnesses.

Visitors were asked to stay by their cars to maintain social distancing and listen to the ceremony over loudspeakers and car radios.

Lt. Gov. Kathy Hochul said it was the terrorists’ goal to divide the nation. But instead, she said, the country came together.

“I want to call on that spirit that was so evident two decades ago and say, 'Can we draw on that same spirit of unity once again?'” Hochul said, drawing a parallel between the attacks and COVID-19. “We’ve been under attack. Not an intentional enemy, but we have been taken down once again by an enemy that came from abroad.”

Suffolk Police Det. Phil Alvarez, the brother of the late NYPD detective and Oceanside native Luis Alvarez, said it’s important to remember not only those lost on 9/11 but those who died in the days that followed.

Luis Alvarez died last year from stage 4 colon and liver cancer after being assigned to Ground Zero for three months. In his final months, he successfully lobbied, with comedian Jon Stewart, to extend the September 11 Victims Compensation Fund.

"Thank you for never forgetting. That’s all my brother wanted, that you never forget," Alvarez said. "It was on that day 19 years ago that my brother’s body started to die, but it was the day his soul came alive. He had a purpose."

Phil Alvarez said his brother felt the need to warn his team of Ground Zero first responders to get checked for 9/11-related illnesses.

"He never wanted the spotlight or to be in front of our nation’s leaders," he said. "That warrior spirit turned to strength and healing for the beloved 9/11 community. As we remember our heroes 19 years ago, let us remember those still suffering."

In Riverhead, more than 100 officers, public officials and family members assembled on the lawn of the Suffolk Sheriff’s Office to mark the planting of a “Survivor Tree” that descended from one that survived the attacks.

“The collapse of the Twin Towers nearly destroyed it,” Toulon said of the tree, the original of which was nurtured back to life and cultivated, producing three new seedlings each year for distribution to communities in need. “We are grateful to be chosen as one of those sites.”

Rich Palmer, a team leader for the Foundation and a retired 9/11 responder, said the tree represented resiliency.

“Let today also be a day where we stand united, as we plant a seedling and watch it grow over time," Palmer said. "Hopefully this seedling, when it reaches full growth, is a beacon of strength, courage and love.”

State Sen. Monica Martinez (D-Brentwood) recalled she was a teacher in her first year on the job at the time of the attacks. Martinez said she had to comfort and be strong for “a whole bunch of high schoolers, crying,” including one whose father was thought to be in the towers.

Assemb. Anthony Palumbo (R-New Suffolk) said "these tragic events showed resiliency, and the survivor tree emulates that. And as we sit here today with masks in our hands dealing with a crisis and the existential threat of danger constantly over our head similar to the aftermath of 9/11. We showed our New York strength, our American strength. We united, and it made us tougher.”

Smithtown officials, volunteer firefighters in dress blues, and Marines gathered at the town’s 9/11 memorial off Main Street on Friday for a shared prayer and the reading of the names of 54 town residents killed in the attacks, including first responders and office workers in the World Trade Center.

“Thank you for your sacrifice and commitment to the nation," Smithtown Supervisor Edward Wehrheim said, addressing police officers, firefighters and others who assisted in rescue efforts. "You gave us hope in our darkest hours. This administration will always have this ceremony and we will never forget.”

Councilman Thomas Lohmann, a former NYPD homicide detective who worked on the pile for weeks after the attacks, said he stopped attending memorials in New York City because their emotional toll had gotten worse as time passed.

“The older you get, it’s harder and harder,” said Lohmann, who suffers with health complications stemming from his work at Ground Zero.

Lohmann said he had no desire to revisit the memories from that dark time.

“When you’re physically there for days and weeks, and what I saw that day, nothing in life can prepare you,” he said.