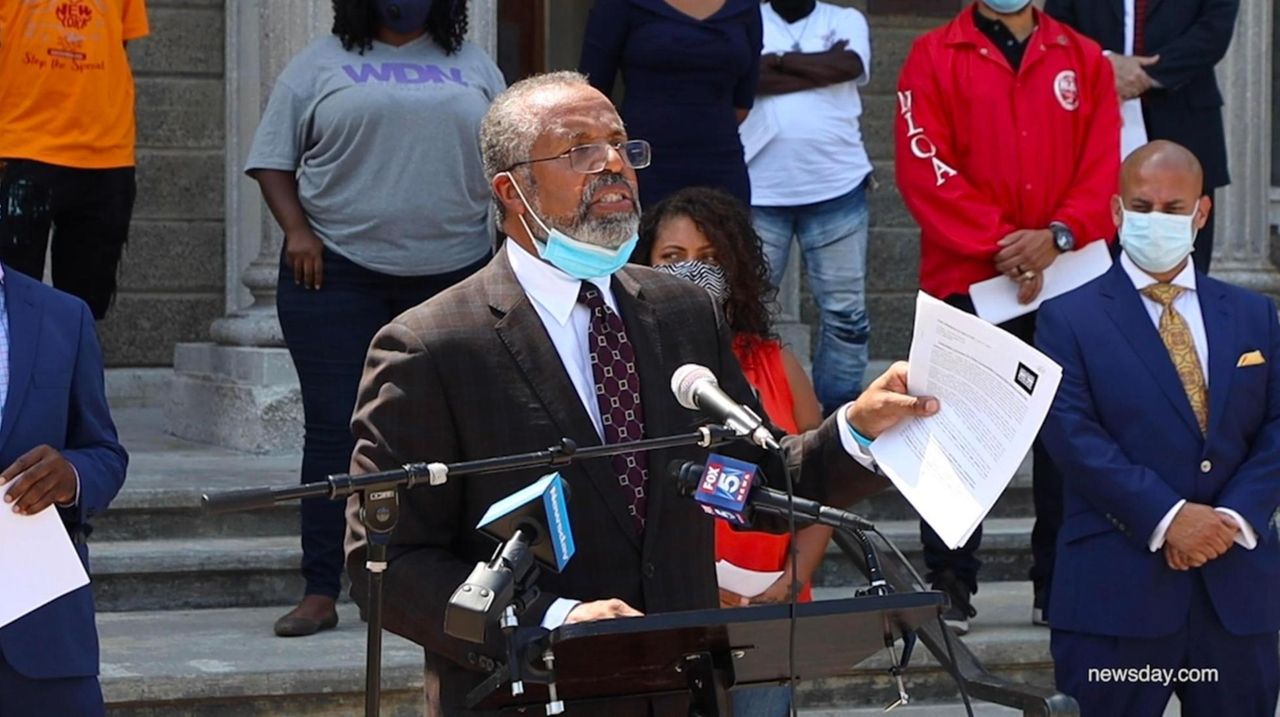 On the steps of Nassau's legislative building, members of a new coalition aimed at implementing reform in policing on Long Island gathered on Thursday, to offer up a draft of potential legislation to create local civilian complaint review boards. Credit: Howard Schnapp

Members of a new coalition aimed at implementing reform in policing on Long Island gathered Thursday on the steps of Nassau's legislative building to publicly offer up a draft of potential legislation to create local civilian complaint review boards.

The group, known as Long Island Advocates for Police Accountability, formed in the aftermath of the police custody death of unarmed Black man George Floyd in Minneapolis in May.

The fatal encounter has sparked a national outcry for equal justice that has reverberated on the streets of Nassau and Suffolk counties, leading to numerous protests that have jump-started dialogue about policing techniques and the relationship between the community and law enforcement.

Representatives of this 60-member group said they want to take that conversation a step further. Instead of just calling for police reform, they have fashioned legislation that could be adopted by local lawmakers to pave the way for independent, taxpayer oversight of the Island’s police forces.

He pointed to Gov. Andrew M. Cuomo's executive order on police reform, which tells every local government with a police agency to review current police deployments, policies and practices and develop an improvement plan to promote community engagement and address any racial bias.

The nascent advocacy group that gathered Thursday in Mineola includes more lawyers, a former police officer, social workers and other professionals who are focused on addressing what advocates dubbed “the inequities of a broken system” when it comes to law enforcement’s treatment of people of color.

The draft proposal the group released Thursday would amend Nassau's charter and administrative code to create a civilian complaint review board with 11 appointed members, some named by the Legislature and some by the county executive, with one jointly appointed chair.

The board would have to the power to investigate complaints from the public about alleged misconduct by police. It also would be empowered to issue subpoenas, obtain evidence and interview witnesses before issuing findings and recommendations to Nassau Police Commissioner Patrick Ryder. Those recommendations could include penalties such as discipline, a psychological evaluation or more training depending on the severity of the substantiated allegations, according to the proposal.

Ryder then would either adopt the recommendation or explain in writing the reason for departing from it. The board would notify the complaining citizen of its findings and any actions by Ryder before a report would be filed with the county attorney. Those with substantiated complaints would become public, with some redactions permitted, the draft legislation says.

Ryder, in a statement later Thursday, said his department “has received police reforms handed down from Albany” and is in the process of addressing them. But the commissioner also seemed to push back on the idea of a civilian complaint review board.

“Our Police Department has a long history of working with the communities we serve, being transparent and investigating all complaints. I stand by the process that we have and the integrity of my investigators to obtain the evidence and find the truth,” Ryder added.

Advocates for the police reform group stressed Thursday that their aim was not to exacerbate any divide between law enforcement and the community. They're planning next to release a similar draft of legislation for Suffolk.

The social worker alluded Thursday to what she called "the absurdity of our current policing system that does not acknowledge the humanity of our police officers" who work in an environment that doesn't give them the monitoring and support they need to properly do their jobs.

Nassau County Executive Laura Curran reacted later Thursday by saying in a statement that her administration is committed to moving the county forward "with positive reforms that improve public safety while building trust between police and the communities they serve."

She added: "I welcome constructive dialogue and look forward to engaging this group as part of Police And Community Trust (PACT), Nassau’s new initiative bringing protest organizers and law enforcement together to listen and engage in frank conversations about community concerns.”

Suffolk County Executive Steven Bellone said the county in the last few years has "made great progress in diversifying our police force and building community trust by embracing and instituting a number of reforms."

His statement also said, as mandated by Cuomo, the county "is working to develop a plan that builds upon this progress and modernizes police strategies."

A Suffolk police spokeswoman said the agency "looks forward to working with our community partners and collaborating as we explore areas of reforms to develop a comprehensive policing plan that is consistent with the Governor’s Executive Order."