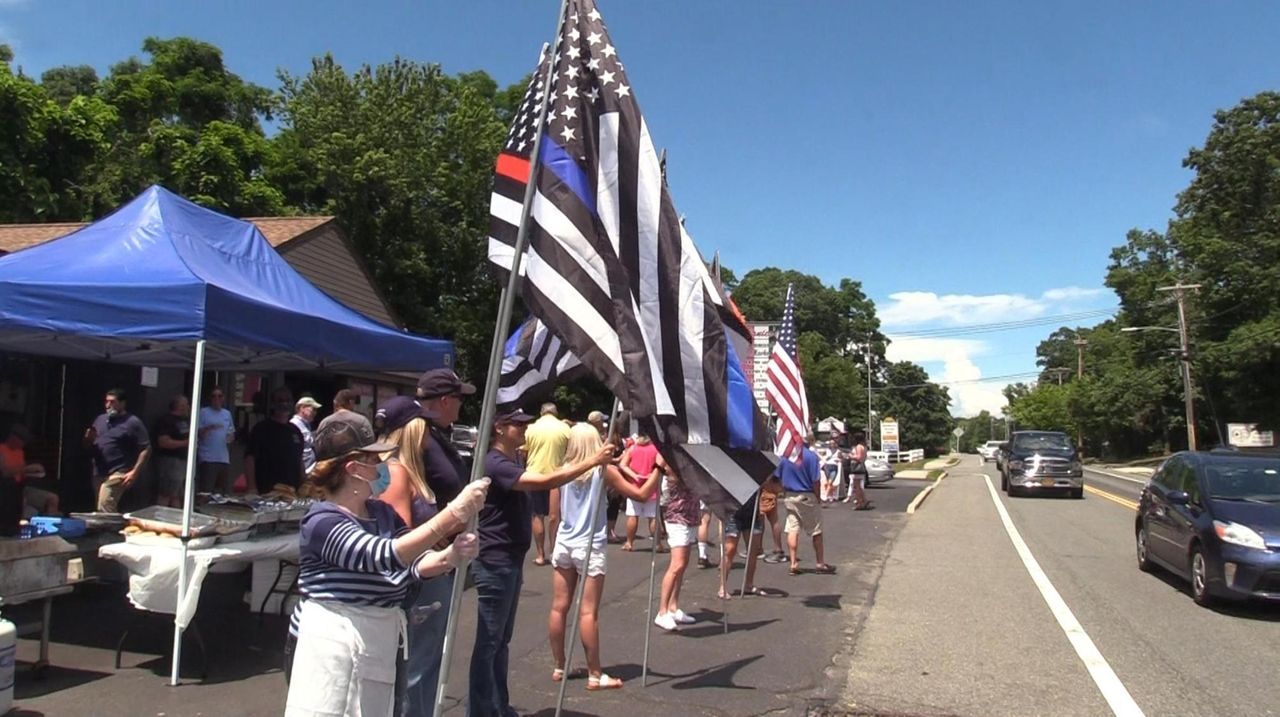 Law enforcement supporters are mounting an effort to show appreciation for police as Black Lives Matter protests against police brutality continue into their second month.

The campaign comes during a time of anti-police sentiment in many major cities and suburbs following the death of George Floyd in police custody in Minneapolis. Floyd's death sparked waves of protests across Long Island and New York City, legislation to improve police transparency and movements to "defund" the police.

Nassau Police Benevolent Association president James McDermott said his officers received words of encouragement every day from a grateful public as they addressed a host of issues from the opioid crisis to gang violence to counterterrorism.

"The radical agenda of a few does not reflect the position of the majority," he said. "We do not need polls to show us that our residents do not want to defund the police."

Patrick Hendry, treasurer of the NYPD PBA, said "this is the most difficult time in my 27 years as a police officer and it will not get better until our elected leaders listen to New Yorkers who support police officers."

The grassroots campaign was launched by New Hyde Park resident Diane Bentivegna, a resident of South 14th Street, where 43 homes have put up blue ribbons.

"We value and appreciate our police department, not only for their service but their utmost professionalism in carrying out their mission," Bentivegna said.

At Panico’s Community Market in Smithtown, Thin Blue Line and American flags drew honks from passing motorists and many in the crowd of about 75 — town and police union officials among them — said they were indignant over police officers’ treatment in recent weeks by the public, elected leaders and the news media.

“This is our way of giving back and saying our appreciation to police officers who are currently under attack,” said Pam Farino, a Smithtown retiree.

“While the rest of the nation sheltered in place, the men and women who put on a uniform didn’t,” said Suffolk PBA president Noel DiGerolamo. He said he was "disgusted" by the conduct of some protesters in recent weeks; the vast majority of the public is “silent and supports law enforcement," he said, "and if somebody speaks to that, they’re automatically billed a racist, which is absurd.”

Dan Tirelli, an NYPD PBA official who lives in Setauket, said he, too, believed a “silent majority support the police in what we do.” But he said the typical NYPD officer's experience is different from their Long Island officers because of the difference in elected leadership. "There’s much more support” on Long Island, he said.

Smithtown was the site of several Black Lives Matter marches this summer. They took place largely without violence but Smithtown Supervisor Edward Wehrheim, who visited Panico’s on Wednesday, said he was upset over the way officers were treated, recounting a scene in which a young man screamed profanities at officers in front of Town Hall.

“If you have issues, sit down and talk about it,” Wehrheim said. “No one deserves to be abused.”