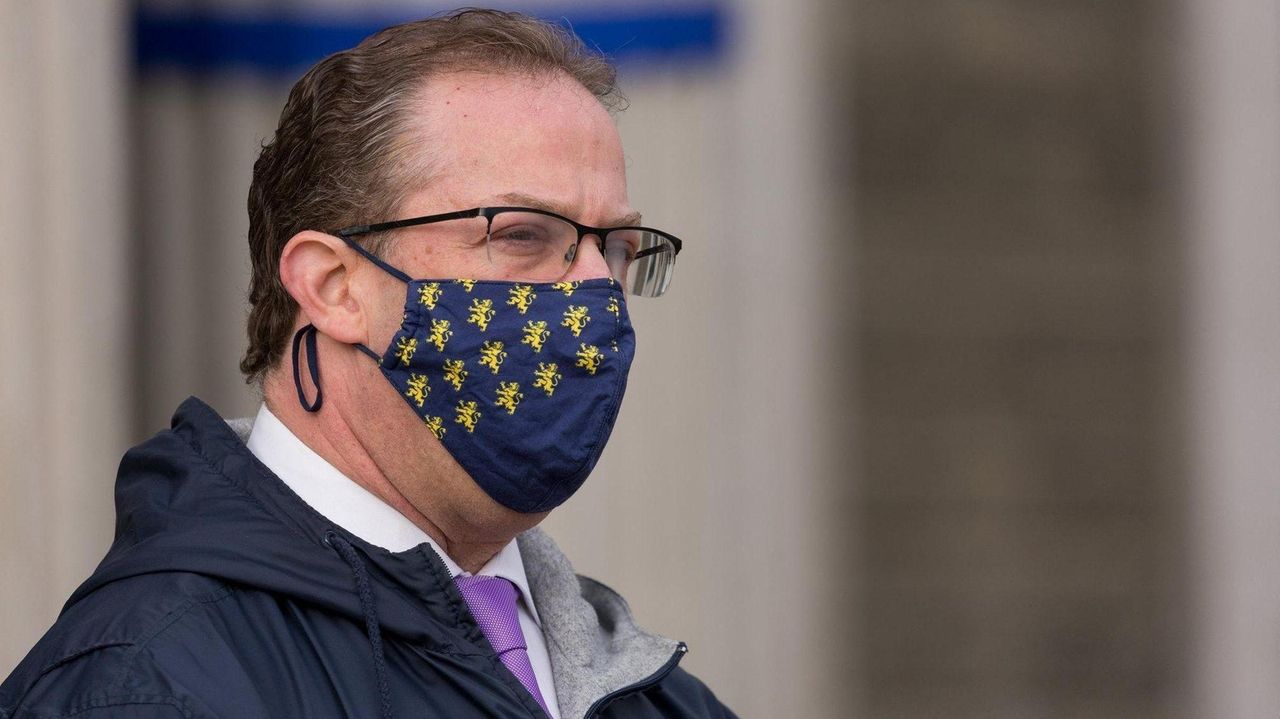 Nassau's health commissioner was accused by Democrats of flip-flopping his position on masks. Minority leader Kevan Abrahams on Tuesday sent a letter to Dr. Lawrence Eisenstein calling for him to "immediately dispel the public confusion we believe you have caused by your waffling regarding masks." Newsday's Cecilia Dowd reports. Credit: Newsday staff; File Footage

In a letter to Eisenstein Monday, Minority Leader Kevan Abrahams (D-Freeport) said, "in failing to publicly renounce the County Executive's illegal orders and refusing to enforce the lawful mask requirements issued by the State Health Commissioner, it is the opinion of the Minority Legislature that you are in direct violation [of] your statutory duty as the County's local health officer."

Abrahams continued: "More importantly, you are also jeopardizing the health of county residents whose medical wellbeing has been placed in your hands."

Abrahams told Eisenstein that if he did not "disavow" Blakeman's "unlawful orders, we do not see how you can legitimately continue to function in your position of trust as Nassau County's Health Commissioner."

In a statement to Newsday Tuesday, Eisenstein said he was not "anti-mask."

He said, "despite large numbers of cases, our healthcare facilities are not overwhelmed because of our excellent vaccination rates."

Eisenstein continued: "At no point have I said people should not wear a mask, nor am I anti-mask. In fact, my position has not changed, in which people have to make the best informed decisions for themselves at the time … "

He said his "position on public health has remained consistent but has adapted as the science reveals itself. As a doctor, I take very seriously my ethical obligation to speak the truth, adapt with the science, and help Nassau County residents get their lives back in the setting of COVID. Let’s continue this journey respectfully and safely."

Last week, Eisenstein appeared with Blakeman, a Republican, when Blakeman issued an executive order directing school boards in Nassau to hold votes on whether their districts should comply with Democratic Gov. Kathy Hochul's order requiring children and staff to wear masks in schools.

Blakeman also issued an order codifying his position that Nassau would not comply with the state's indoor mask mandate for businesses, and another letting county employees opt out of wearing masks on county property.

Former County Executive Laura Curran, whom Blakeman defeated in November, said in December the county would "not be actively enforcing" the state's indoor mask mandate, but would respond to specific complaints about violations.

Eisenstein said residents should make the decision "that's best for them."

"School districts have to do what’s best for them," Eisenstein said.

He also said the science was unclear about whether masks stop the spread of the omicron variant.

"You are starting to see with omicron there are questions of what level of masking is better than other levels," Eisenstein said. "So we are waiting for more clear science."

Hochul also referred to the state Education Department, "which has direct control over funding of schools. I hope I don’t need to say anything more on that topic."

Michael Kelly, president of the Nassau-Suffolk School Boards Association, told Blakeman that he did not have the legal authority to order schools not to follow the state's mask mandate.

Abrahams in his letter to Eisenstein called Blakeman's orders "grossly irresponsible and blatantly unlawful. It is inconceivable to us that you, as the county's chief medical officer would acquiesce in such orders."

Abrahams wrote: "In our opinion, every doctor with a medical license in Nassau County has an ethical duty to raise his or [her] voice in denunciation of these harmful directives. And you, above all, as our County's Commissioner of Health have a special obligation to take the lead in this opposition."

Abrahams cited an op-ed Eisenstein wrote last February in which he advised vaccinated people to "protect themselves and their communities by wearing masks."

Abrahams continued: "Overnight it seems, with the advent of an anti-mask political regime in Nassau, your views have changed to coincide" with Blakeman's.

"Such an abrupt flip-flop is medically inexplicable especially in the height of a resurgent pandemic," Abrahams said.

Eisenstein serves at the direction of the county Board of Health. He earns $235,700 a year, according to county records provided by the Blakeman administration.

Blakeman defended Eisenstein in a statement Tuesday, calling him "a certified infectious disease expert who has earned bipartisan support for helping guide Nassau through the worst of the pandemic."

Blakeman urged legislative Democrats to "stop playing politics with the rights of parents, and follow the science."

At a news conference Tuesday at the State Capitol in Albany, Blakeman said,

School boards group: Blakeman lacks say on masking"Counties have no more authority to direct school board matters than do schools to legislate county affairs," Michael J. Kelly, president of the Nassau-Suffolk School Boards Association said in a letter to the Nassau county executive. Hochul: No one can 'accuse me of being a pushover'Gov. Kathy Hochul said she will stand up to Nassau County Executive Bruce Blakeman's attempt to disobey her mandate that masks must be worn indoors in schools amid the COVID-19 pandemic. Blakeman signs order giving public schools option to mandate masksThe order runs counter to a state regulation and argues, without any medical evidence, that masking children "may lead to negative health and societal ramifications." Gov. Kathy Hochul said "state laws prevail."