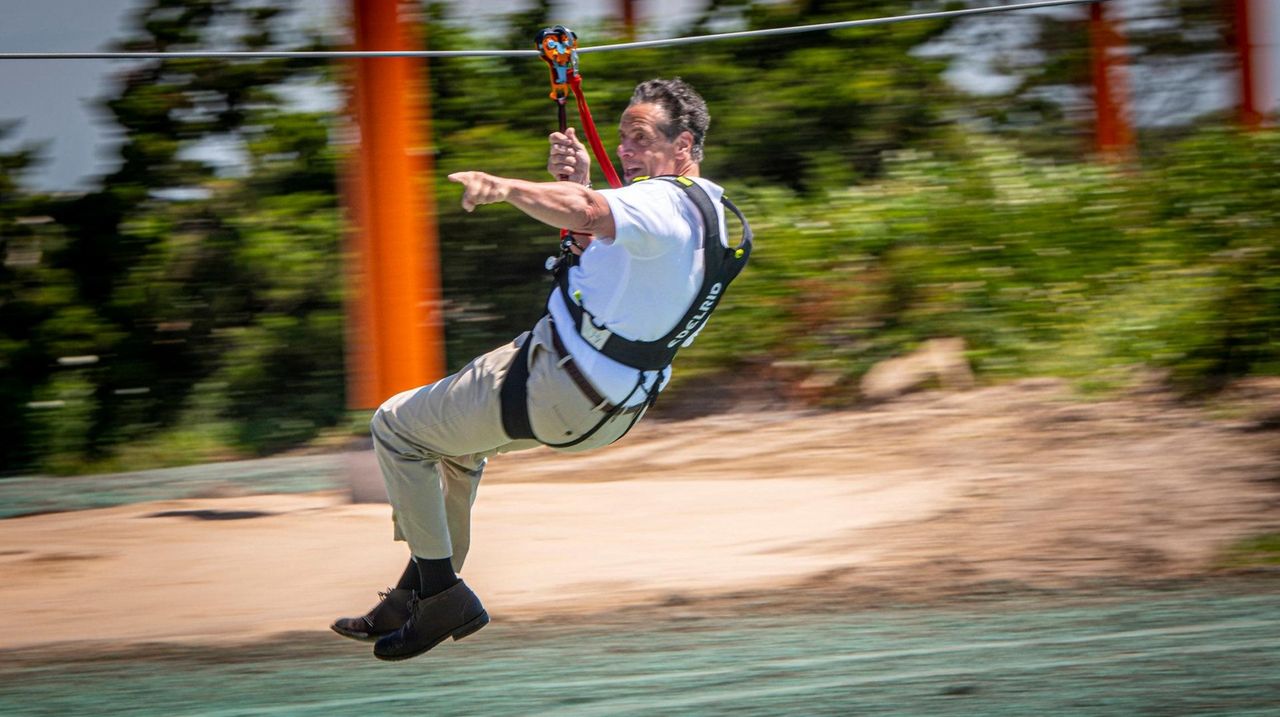 Gov. Andrew M. Cuomo and other officials gathered at Jones Beach on Tuesday to celebrate the 90th anniversary of the opening of Jones Beach. Credit: News 12 Long Island

Never mind the grumblings from a crowd on the other side of the 700-foot line, waiting for Cuomo to christen the attraction. "You tested this?" quipped one person, the query made in mock earnestness moments before the governor stepped off a 50-foot-high platform and descended down the line in the new park's debut Tuesday for the iconic beach's 90th anniversary.

"I'm not great with heights, but it worked great," the third-term governor said after he was pulled in and being removed from a harness.

Earlier, Cuomo had waxed nostalgic about his no-frills trips to the beach with his grandparents, who packed foil-wrapped sandwiches that got a signature "boulder"-tasting crunch after sand was kicked into them by a beachgoer navigating the blanket-filled beach.

The "WildPlay" park, a panoply of tall orange poles connected by wires and netting, cost $4.7 million to build and features four zip lines side-by-side, a 40-foot-drop, and aerial adventure courses. The cost was among $100 million in public and private funding for park upgrades since Cuomo took office in 2011. The upgrades usher in a new era for the state park with a "whole new series of adventures" for children and families, Cuomo said.

"It's a whole new reason to go to Jones Beach," the governor said.

Cuomo, in a speech before the inaugural ride, said Jones Beach of prior eras "was a place where people could get a little taste of nature. They could get a break. It was where they went for a vacation. You were poor, you were lower income, you were middle class, you didn't go to Europe for the summer, you didn't fly off to an island. You didn't get on a cruise ship. You worked. That's what you did, and then on a Saturday or a Sunday, if you were lucky enough, you loaded up the car, and you put everyone in it and you went to Jones Beach, and that was where you could breathe."

Cuomo, in front of the adventure park — with sand and freshly sprayed hydroseed behind him — laid out a vision for improving infrastructure across the state.

He said the zip line represents "New York boldness," and he highlighted ongoing work at the Long Island Rail Road and LaGuardia and JFK airports.

"We're going to build New York back to the greatness that it represented and made it the greatest state in the nation," he said. "And it's underway. It's not a dream, it's not a vision. You can see it as plainly as you can see everything around you today."