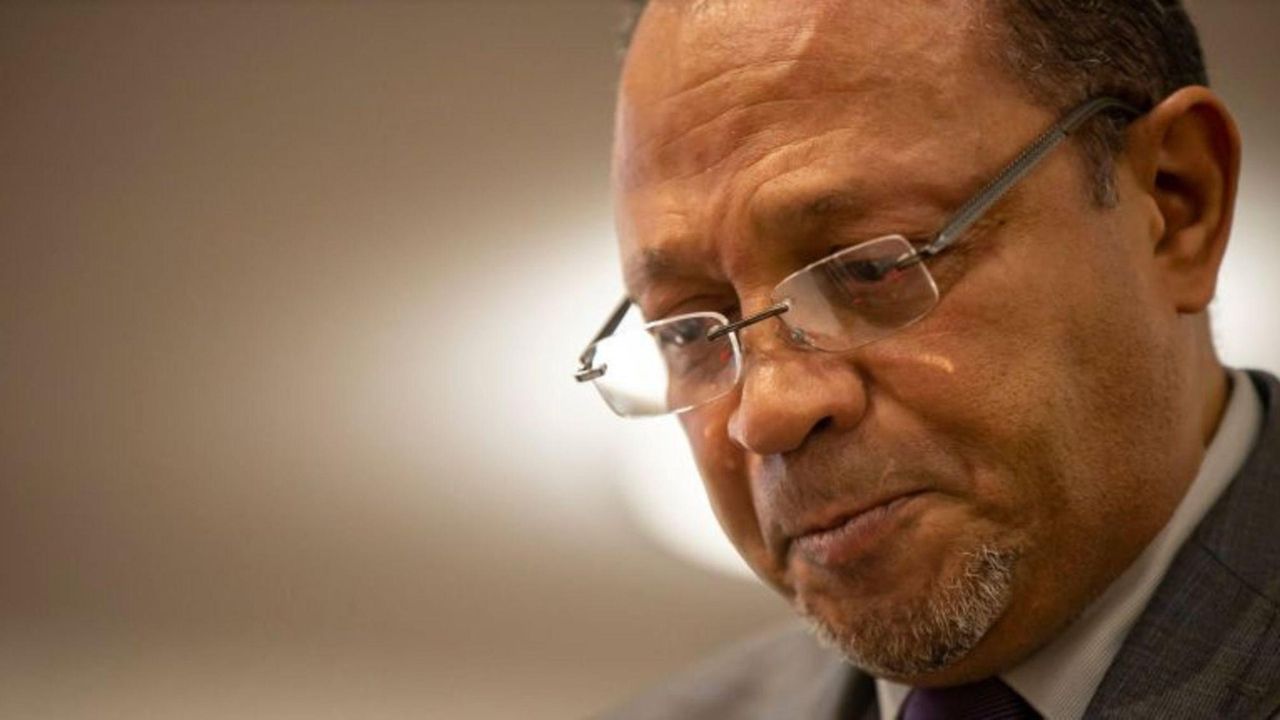 On Thursday, the Nassau County Legislature held a hearing to discuss the bail reform law that went into effect on Jan. 1. Newsday reporter Candice Ferrette has the story, the most emotional aspect of it being when Victor Maldonado of the Bronx broke down at the podium. His son was killed by an alleged drunken driver in January, and Maldonado blames the new law. Credit: Howard Schnapp

The father of a 27-year-old Westhampton Beach man killed by an alleged drunken driver last month pleaded with Nassau County legislators Thursday to join his family in pressing for changes to the state’s new bail law.

“It is with a broken and heavy heart that I stand before you to show the reality of what Albany has created,” Victor Maldonado, father of Jonathan Flores-Maldonado, who died Jan. 12 after his vehicle was struck from behind in Suffolk County.

Maldonado, of the Bronx, was among those invited by majority Republican legislators to testify at a five-hour hearing on the state's new criminial justice law and its impact on county law enforcement and the judiciary.

Under the law, which took effect Jan. 1, bail cannot be imposed on defendants charged with most misdemeanors and nonviolent felonies.

Activists who want to end cash bail are against changes to the law, and are calling on Democrats in the State Senate and Assembly to hold firm on the overhaul. The activists say the new state law makes the system fairer for low income defendants, who are more likely than others to be jailed while awaiting trial.

Critics, including many in law enforcement, say the new law endangers public safety by allowing criminals to remain on the streets.

The two legislators traded barbs for about five minutes, at times speaking over each other.

Maldonado testified for about 15 minutes and broke down in tears several times. He eulogized his son, a recent college graduate who was driving for Uber at the time of the accident, and vowed to not allow his death to be in vain.

“I will fight to get this law amended so that the people who deserve it and want a second chance will have one. And so that career criminals and repeat offenders do not,” Maldonado said.

He and his family have blamed the state bail laws for the release of the suspect in his son's crash.

Jordan Randolph, 40, of Bellport, was charged with charged with felony driving while intoxicated in the fatal crash on the William Floyd Parkway in Shirley on Jan. 12. The offense is defined in New York as a nonviolent crime.

State court officials said a Suffolk County judge misinterpreted the new bail laws when he denied a prosecutor’s request to place Randolph under electronic monitoring — typically, an ankle bracelet — after his arraignment for the traffic fatality.

The case has become a flashpoint in the debate over unintended consequences of the state’s new law.

Nassau Police Commissioner Patrick Ryder said at the hearing Thursday he believed state lawmakers were considering positive changes to the law, particularly if the result allows judges the ability to decide who poses a public safety risk if released.

Ryder said he did not believe pretrial electronic monitoring of defendants would work in all cases.

Ryder cited the example of a bank robbery suspect who was released recently under the new law with an ankle bracelet. While awaiting trial, the defendant allegedly cut off the monitor and committed two more bank robberies. He was rearrested and remanded, Ryder said.

“We have major, major practical issues with the deployment and implementation of these reforms,” Painter said. “We will be trying our best and we have been trying our best with the resources we have.”

Also at the hearing, Freeport Village Mayor Robert Kennedy said the bail changes have boosted police costs. He said he believed the village would have ended the year with a $1 million surplus, but instead will merely have a balanced budget because of new technology and personnel costs associated with the bail law.