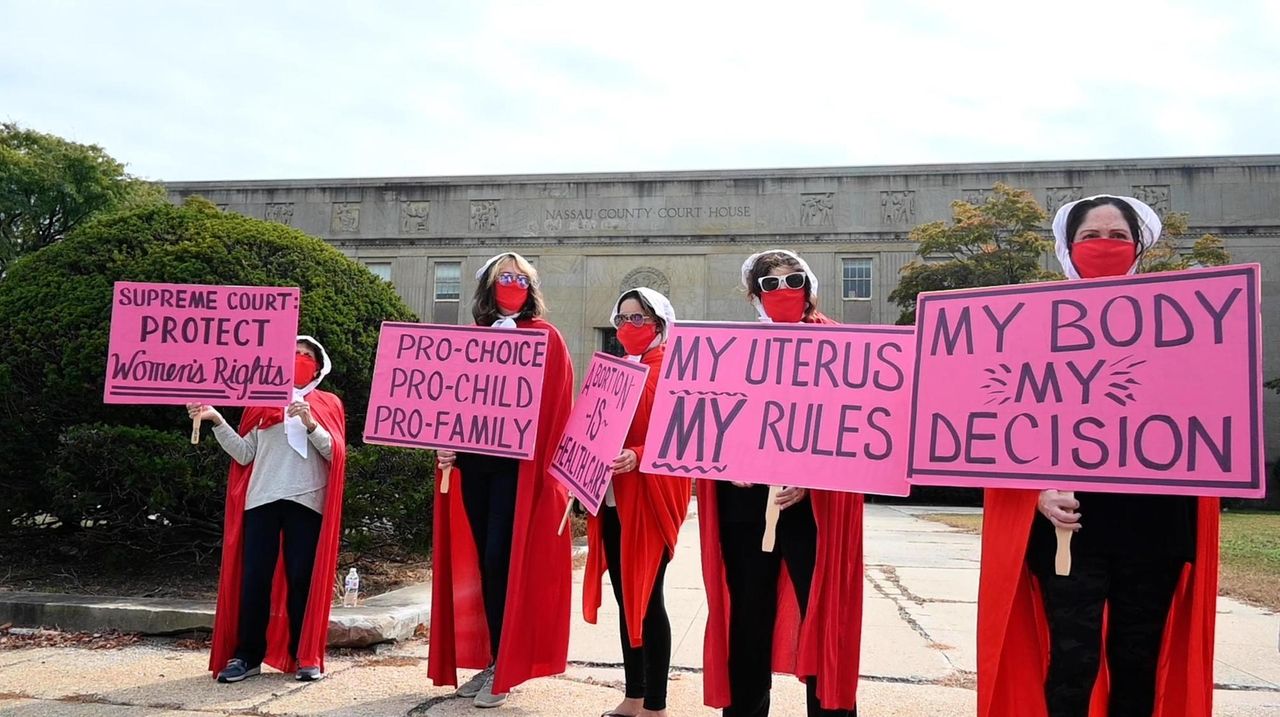 Democratic lawmakers, candidates, doctors and progressive activists — many dressed in handmaiden's costumers — said women would be denied basic rights and protections if conservatives take a commanding 6-3 advantage on the U.S. Supreme Court.

"These actions are wrong," said Patricia Pastor, president of the Nassau County Chapter of the National Organization for Women, who will travel to Washington, D.C., Monday to protest Barrett's nomination. "I will not stand by and let my daughter's future be in a country that has regressed 100 years."

The protesters, along with Senate Democrats, contend the winner of the Nov. 3 presidential election should pick a replacement for Ruth Bader Ginsburg, who died last month at the age of 87.

Senate Republicans, who have the votes to approve Barrett's nomination, said they will fast-track the confirmation process with plans for approval in the full Senate vote by the end of the month.

"Millions of Americans have already voted," said Assemb. Chuck Lavine (D-Glen Cove). "Is this the time for the Senate of the United States … to be considering a confirmation of a Supreme Court justice?"

The protesters, all of whom wore masks, wore Black Lives Matter shirts and waved rainbow flags in support of gay rights. They carried signs reading "My Body, My Decision" and "Respect Existence or Expect Resistance." Many motorists along Old Country Road honked in support while others chanted for President Donald Trump while one woman yelled, "Why are you covering up your face?"

"The health and well being of millions of Americans across the country lies in the balance of this court nomination," said Krief, a pediatrician in Huntington.

"We know that Amy Coney Barrett has no place in the Supreme Court," Rivers said. "She would tip the balance on all that we deserve. All that we have equal rights to."

The protesters suggested Barrett and other conservative justices will reverse Roe v. Wade, leaving abortion rights to the states.

"We have women who want the choice and want to control their own body," said Judi Gardner, a founding and steering committee member of Long Island Activists.

GOP, Dems spar over Barrett on day before hearingsThe Senate Judiciary Committee aims to send Judge Amy Coney Barrett's Supreme Court nomination to the full Senate floor by Oct. 22, while Democrats say they plan to focus this week's hearings on her criticisms of the Affordable Care Act.