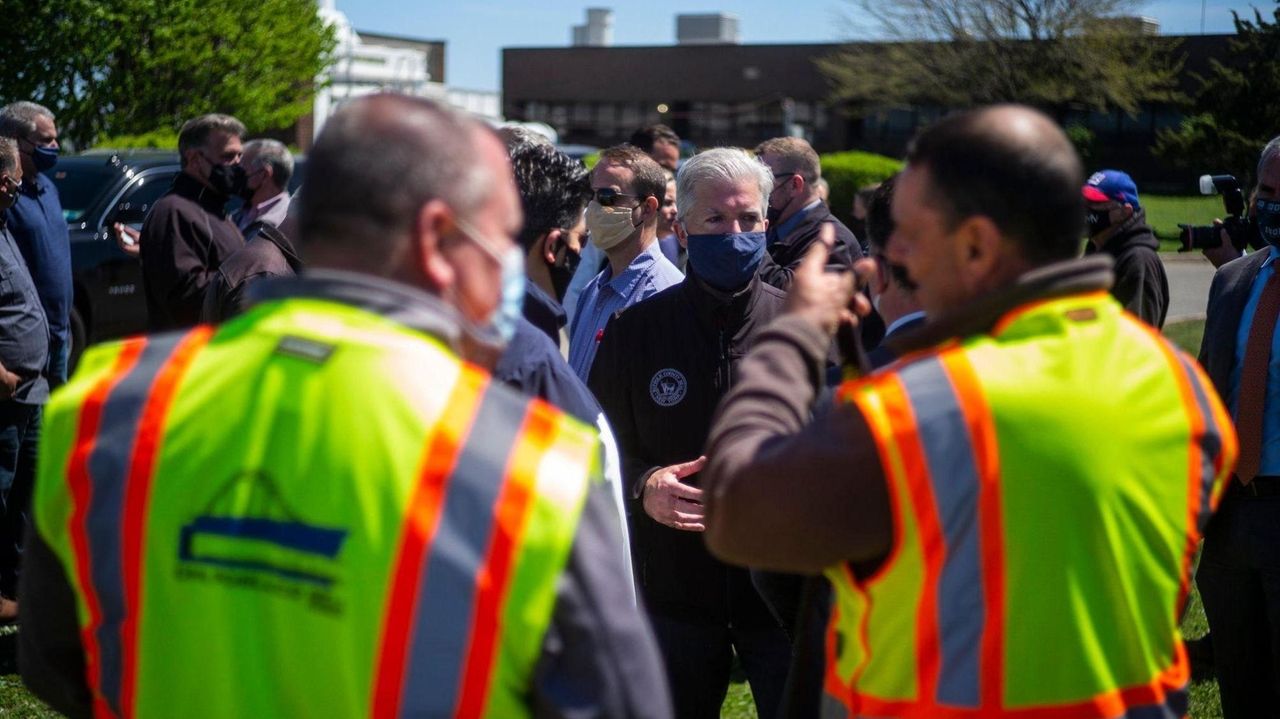 Suffolk County Executive Steve Bellone and Nassau County Executive Laura Curran announced at a news conference Thursday that they will join with the Nassau/Suffolk Building and Construction Trades Council, the Long Island Contractors’ Association and the Long Island Federation of Labor to assess the region’s infrastructure needs, including a list of priority projects, for consideration as the American Jobs Plan is finalized in Washington, DC. Credit: Newsday / Reece T. Williams

Long Island is seeking more than $5 billion in infrastructure funding as part of a bill under consideration in Washington that would improve the region's wastewater, upgrade its hospitals and repair its aging bridges and roadways.

The list of $5.5 billion in projects will be submitted to the state's congressional delegation as they negotiate terms of President Joe Biden's proposed $2 trillion American Jobs Plan.

The wish list for Suffolk includes a $235 million to redevelop the south side of the Ronkonkoma Hub; $2.6 billion to fund 16 wastewater and sewage improvement projects; $254 million for structured parking in downtown Ronkonkoma and $29 million for upgrades to the county's medical examiner and forensic building.

Bellone said the projects will create 7,531 jobs and generate $6.3 billion in economic output.

In Nassau, the county has prioritized 27 projects costing $2.08 billion. The work, Curran said, would generate an estimated 7,400 jobs and more than $2.5 billion in economic activity.

Nassau also wants $1.27 billion for water and wastewater initiatives, including the Bay Park Conveyance project to restore the impaired Western bays; the design and installation of a sewer system at Point Lookout and a plan to incentivize homeowners to replace aging septic tanks.

Curran said the projects will "create jobs desperately needed to power our recovery from the pandemic."

Long Island labor leaders, who joined the news conference, said they have the manpower needed to repair crumbling bridges, pave potholes on outdated roadways and upgrade the region's electrical grid.

"We are not asking for a handout," said Marc Herbst, executive director of the Long Island Contractors Association. "These are needs."

Matthew Aracich, president of the Nassau/Suffolk Building and Construction Trades Council, said the projects go beyond brick and mortar buildings to include investments in training and apprenticeship programs.

"We want to ensure Long Island has no barriers and opportunities for everybody," Aracich said.

John Durso, president, of the Long Island Federation of Labor, said the bill is an opportunity to "move the island forward," creating good-paying jobs, health care and pensions for the middle class.

"This infrastructure bill is critical to our future," Durso said. "Every member of the [congressional] delegation has to remember this is for all of us."