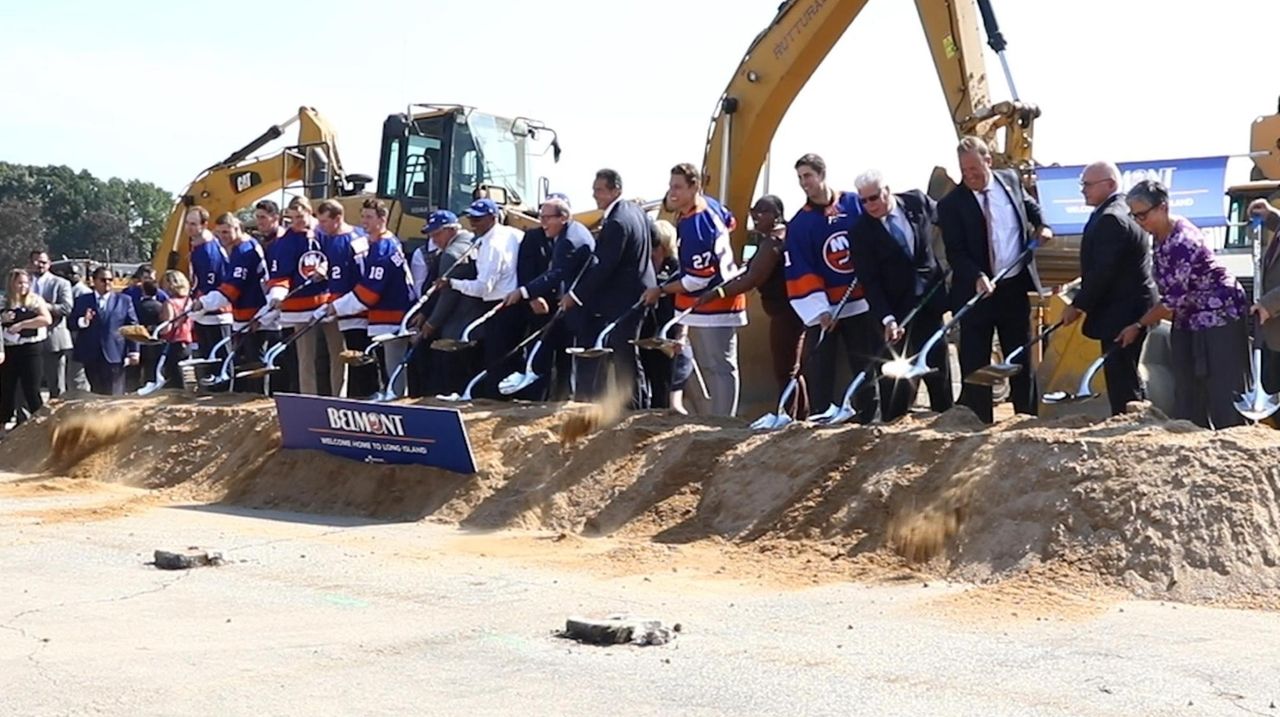 Gov. Andrew M. Cuomo on Monday called the redevelopment of state land at Belmont Park "a project Long Island deserves" as New York Islanders owners, players and developers joined him at a celebratory groundbreaking on the site of a new arena for the National Hockey League team. Credit: Newsday / Chris Ware

Gov. Andrew M. Cuomo on Monday called the redevelopment of state land at Belmont Park “a project Long Island deserves” as New York Islanders’ owners, players and developers joined him at a celebratory groundbreaking on the site of a new arena for the National Hockey League team.

Cuomo, who announced the winning bid for the underused 43-acre parcel 22 months ago, touted a planned full-time Elmont Long Island Rail Road station, along with more than 10,000 construction jobs and about 3,200 full-time jobs the $1.3 billion project would create.

“This is one of the largest and most impactful developments that have been done in the entire downstate region in a long, long time,” Cuomo told an audience of several hundred hockey fans, politicians and other project supporters.

New York Arena Partners, a partnership among the owners of the Islanders, Mets and arena development company Oak View Group, have begun construction work on the project, which includes a 19,000-seat arena, 250-room hotel and 350,000 square feet of retail.

Cuomo, calling himself “an old Queens boy,” said Monday he had driven the Cross Island Parkway for decades wondering what would become of the public land at Belmont Park.

The Islanders had played at Nassau Coliseum before moving to Brooklyn's Barclays Center in 2015.

“There’s no place like the Islanders playing on Long Island,” Cuomo said before putting a symbolic golden shovel into the dirt under a blazing afternoon sun.

The ceremony marked an important step toward the end of the Islanders’ decadeslong search for their own arena.

It also comes during a period of tension between the villages of Floral Park and Elmont and state and county officials over the development. Two lawsuits have been filed to stop construction on the Belmont project.

Jon Ledecky, co-owner of the Islanders, said the team's fans deserve a new arena after decades of uncertainty.

“They've been wandering awhile, and they haven't had the right type of facility," Ledecky said. "To have this world-class, state-of-the-art, third-generation arena to call home is something they're worthy of."

“This site will be a beacon for New Yorkers and tourists worldwide,” said Gertler, noting $2.7 billion in economic activity the project is expected to generate. “The arena may be the centerpiece but it is only one part of this redevelopment.”

Construction of the arena, hotel and retail project is handled by the Wilpon family’s Sterling Project Development, which also built Citi Field.

Mets owner Fred Wilpon was on hand, watching the groundbreaking from the first row.

Jeff Wilpon recalled after the ceremony Monday that he grew up an Islanders fan in Roslyn and attended their Stanley Cup games as a teenager in the early 1980s.

He runs Sterling Project Development with partner Richard Browne and got involved with the Islanders’ project when developer Scott Malkin became the team's controlling partner in 2016.

Wilpon said he and Malkin worked together at a development firm in the mid-1980s and have remained friends since. They have spoken for several years about building an Islanders arena at Belmont.

“We thought this was a great location for them,” Wilpon said, “and to see all this parking lot is now dug up, how we’ve got a hole and we’re going to pour concrete soon, it’s pretty amazing."

But a handful of Elmont civic leaders are challenging the legitimacy of the state’s approval process.

In a lawsuit filed Saturday in state Supreme Court in Mineola, they contend the state does not have the authority to designate its own land at Belmont for private development. The suit claims the property is parkland that had served as a disaster evacuation site for nearby residents.

Asked for comment about the lawsuits, Ledecky said: "That's really an Empire State Development situation. We’re full steam ahead. We’re looking forward to commencing play here in October of 2021 and dropping our puck for the first game."

Cuomo has been a champion of the project since he announced in December 2017 that the Islanders group had won the development rights at Belmont.

Cuomo also was involved in negotiations that led the Islanders to split their schedule between NYCB Live's Nassau Coliseum and Barclays Center until the Belmont arena's scheduled opening in 2021.

Elmont civic leaders sue to stop Isles complex at BelmontThe lawsuit, filed in Mineola, contends the state does not have the authority to designate its own land at Belmont for private development. Coliseum gets 7 more Isles games this seasonTwo of those games will be against the Rangers as Coliseum now to host 28 Isles games.