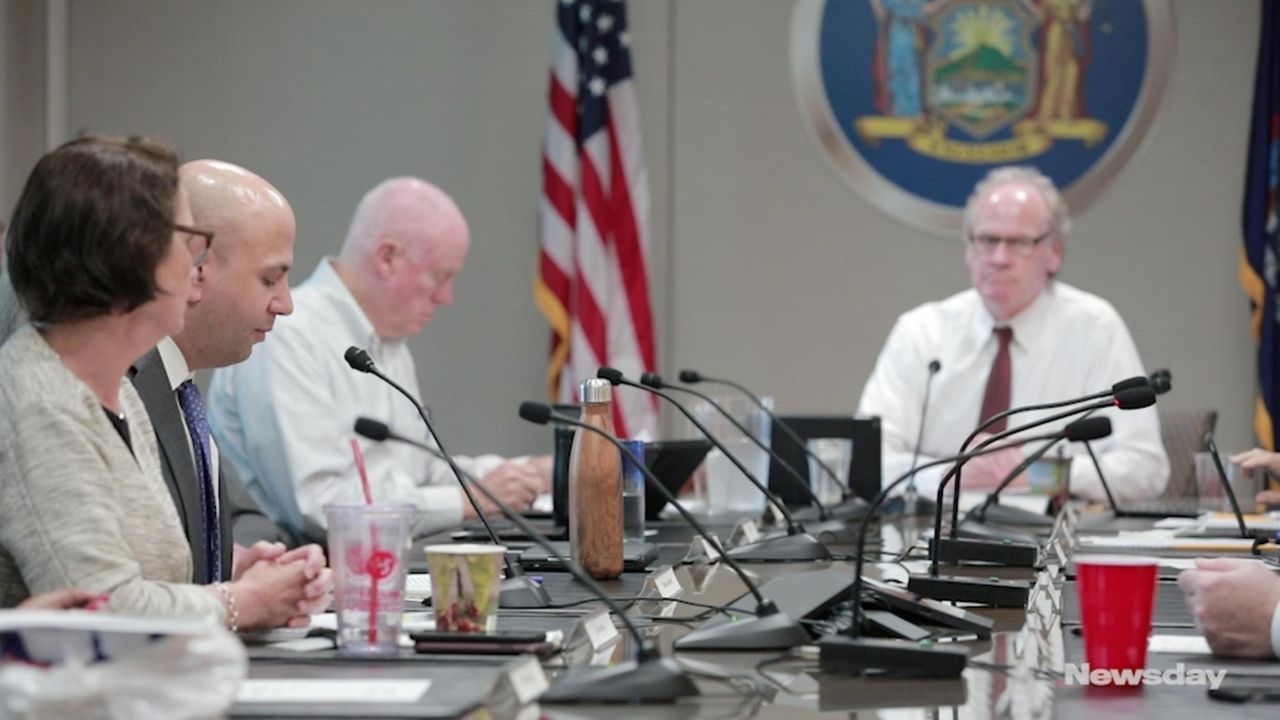 The state board responsible for economic development on Thursday unanimously approved a $1.3 billion arena and entertainment complex to be the new Nassau County home of the New York Islanders. Credit: Newsday / Yeong-Ung Yang

The state board responsible for economic development on Thursday unanimously approved a $1.3 billion arena and entertainment complex to be the new Nassau County home of the New York Islanders.

The six members of Empire State Development voted just after 5 p.m. for the Islanders’ plan following a two-hour meeting in Manhattan that included public comment from residents, civic groups and lawmakers. All but two speakers supported the project.

New York Arena Partners, the project developers, have proposed a 19,000-seat arena, 350,000 square feet of upscale shops and restaurants, a 250-room hotel and parking on 43-acres of vacant state-owned property at Belmont Park. The development group is a partnership of the owners of the Islanders, the New York Mets and the arena development company Oak View Group.

“We are proud of the open, public process this project has gone through over the last two years, strengthened by the input and support of community members who made their voices heard and helped improve the plan, resulting in today’s positive outcome," ESD chairman Howard Zemsky said in a statement after the vote. "We are committed to continuing to work with New York Arena Partners, community members, and local leaders to deliver on the thousands of jobs and billions in economic activity this project will create.”

The new Islanders arena, which the developers expect to cost $955 million, is anticipated to open in the fall of 2021. That would represent the end of a decadelong search by the National Hockey League franchise for a new modern arena.

Islanders co-owner Jon Ledecky, speaking toward the end of the meeting, became emotional when thanking fans and promised to be good neighbors to Elmont and Floral Park. Then he spoke directly to Zemsky: “It’s been a two-year journey and I want to thank you from the bottom of my heart,” Ledecky said.

Gov. Andrew M. Cuomo brokered a deal last year for the Islanders to split their games between Barclays Center and the Coliseum while they await the opening of the Belmont arena.

"I've been emotional," Ledecky told Newsday after the vote. "It's been a long journey and I think that the fans deserve a new home."

Last week, the state Public Authorities Control Board approved ESD’s acquisition of the Belmont property from the state Franchise Oversight Board, the agency that oversees the New York Racing Association and all activity at Belmont.

The Franchise Oversight Board still needs to approve the state’s environmental review before construction can begin. That approval is expected in a matter of weeks, paving the way for a groundbreaking ceremony.

As part of its approval, ESD also on Thursday adopted the environmental review’s findings statement, an important procedural move because it opens the 120-day window for opponents to file lawsuits seeking to stop the project.

At Thursday’s ESD meeting, Floral Park Village Deputy Mayor Kevin Fitzgerald said, “We have the steadfast support of our residents to use the resources available to us now and in the future to ensure Floral Park remains a great place to live, work and raise a family.”

Floral Park, in conjunction with other local civic associations and elected officials of the areas surrounding Belmont, asked ESD on Monday to put off approving the project. They asked for more time to respond to the final environmental impact statement because it includes significant changes to the project such as a new Elmont Long Island Rail Road station.

Thursday’s ESD meeting largely attracted project supporters, many of whom live in Elmont. Past meetings largely have been attended by Floral Park residents who raised concerns about the project's impact on their community.

Fitzgerald and Floral Park Trustee Lynn Pombonyo — the only two speakers at Thursday's board meeting who spoke against final ESD approval — asked for more time to review the project's impact.

Pombonyo, a former school superintendent, expressed concern about the proposed LIRR station’s proximity to an elementary school and nearby homes.

“We desperately need further review of the details of this plan,” Pombonyo said.

When asked after the vote whether Floral Park village officials were considering legal action, such as an Article 78, to stop or delay the project, Fitzgerald said: "all options are still on the table."

But some Elmont residents welcomed the prospect of more jobs. Developers say the project will create 3,200 jobs, and promise to fill 30 percent of the positions with people living within a four-mile radius around Belmont.

“I’m a Brooklyn Nets, New York Giants and Yankees fan and a soon to be Islanders fan — I welcome our new neighbors,” Nicol said.

Said Suzanne Semler, 55, of East Rockaway: “I’m an Islanders fan and a horse racing fan and this makes sure Belmont is maintained and the team stays on Long Island. It’s so exciting.”

December 2017 — Islanders group is awarded the development rights at Belmont.

January 2018 — Gov. Andrew M. Cuomo brokers a deal for Islanders to play half their games at Nassau Coliseum while awaiting construction of new Belmont arena.

August 2019 — Empire State Development's board of directors approves project, paving the way for the start of construction.

$1.3B Islanders arena project up for final approvalA state development agency is expected to vote on the $1.3 billion project at Belmont Park. Mayor: 'No way' Belmont project, as is, 'won't hurt us'Residents deserve more time to respond to the state's plans for redeveloping Belmont Park, including a new LIRR station, officials and civic leaders said. Public remarks period for Belmont plan extendedIt was scheduled to end Tuesday but extended to Aug. 1 after officials noticed "two minor clerical errors" in the final environmental report. LIRR Elmont station key to Islanders planThe LIRR has not yet done a feasibility study of full-time service to Belmont Park. The station still has to be approved by the MTA Board.