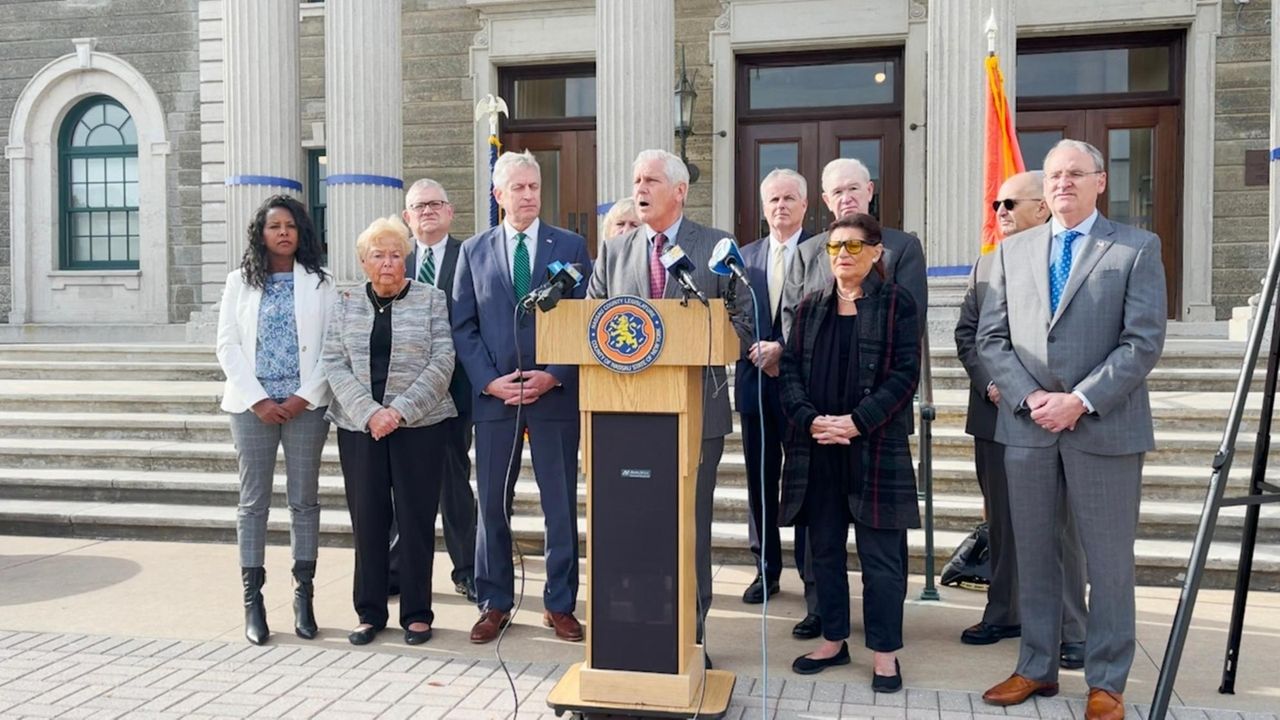 Nassau County Executive-elect Bruce Blakeman met Wednesday with members of the county legislature to discuss the transition to his administration. Credit: Howard Schnapp

Also Wednesday, Blakeman pledged to speak with leaders of Nassau's police and civil service unions, whose members worked under contracts that expired in 2017.

"I expect that as part of my transition, we will start talking to them immediately, and getting a handle on some of the issues that the unions have, and obviously look at it from the standpoint of the county," Blakeman said.

Blakeman announced priorities for his administration and the selection of his chief deputy county executive during a news conference in Mineola, where he was flanked by Republican county legislators.

A day earlier Curran conceded in the race after conclusion of a complete count of absentee, affidavit, and emergency ballots.

In total, Curran lost by 2,150 votes, according to the Board of Elections.

Walsh serves as general counsel to Nassau OTB, a quasi-governmental agency, where Cairo is president in addition to his role as party chairman.

Walsh earns $180,000 annually in the OTB role and is also the unpaid vice chairman of Nassau's Republican Party and a Floral Park GOP committeeman.

Mike Deery, a Nassau Republican committee spokesman, did not immediately say whether Walsh planned to step down from the party leadership role.

In January 2018, Curran signed an executive order barring top county officials from holding a "position of authority within any political party …"

Blakeman announced a website, servenassau.com, to solicit resumes for jobs in the new administration.

"We should all be united, I believe we are united, on issues that protect taxpayers and their wallets, grow our economy, keep Nassau safe, create jobs, and protect parents' rights, and so much more," he said.

On the subject of rising COVID-19 cases and Gov. Kathy Hochul's warning this week that health protocols could be expanded, Blakeman said he would defer to Curran for now.

"We're monitoring the situation very closely. I have the utmost respect for the county executive," he said, "and she will be county executive until Jan. 1, so I will be deferring all questions to her."

Asked to elaborate on the subject of "parents' rights," Blakeman pointed to his opposition during the campaign of mask mandates for children in schools. He said school districts "should determine the policies in their own schools."

He said, "government shouldn't interfere with the parents with respect to any of the rights regarding their children. And I think government can get very heavy-handed at times. I'm a strong believer in the Constitution, individual rights, and I believe that's something that I will address come January, and I will become quite vocal about it."

He said he would decide in the next two weeks whether he will keep Nassau Police Commissioner Patrick Ryder in the job.

"I am consulting with people who are advising me from my transition team on law enforcement and homeland security matters …" Blakeman said.

Walsh will reach out to Curran's chief deputy county executive, Helena Williams, Blakeman said, adding that he believed the transition will begin on Dec. 1 or 2.

He said he expects to have some Democrats in his administration, but applicants should be "in line philosophically with my agenda.".

"I do not expect it will be one-party staffing," he said. "I believe my transition team will have a significant number of Democrats on the team."

He added, "anybody that comes to work for my administration has to be on the same page with my agenda."

Blakeman defeats Curran after count of absenteesBlakeman, a Republican, had 142,626 votes, compared with Curran's 140,476 votes, said Nassau Democratic Board of Elections Commissioner James Scheuerman. Blakeman pledges to reduce crime, fix reassessment systemLowering taxes also is on the agenda as he prepares to transition to Nassau County executive.