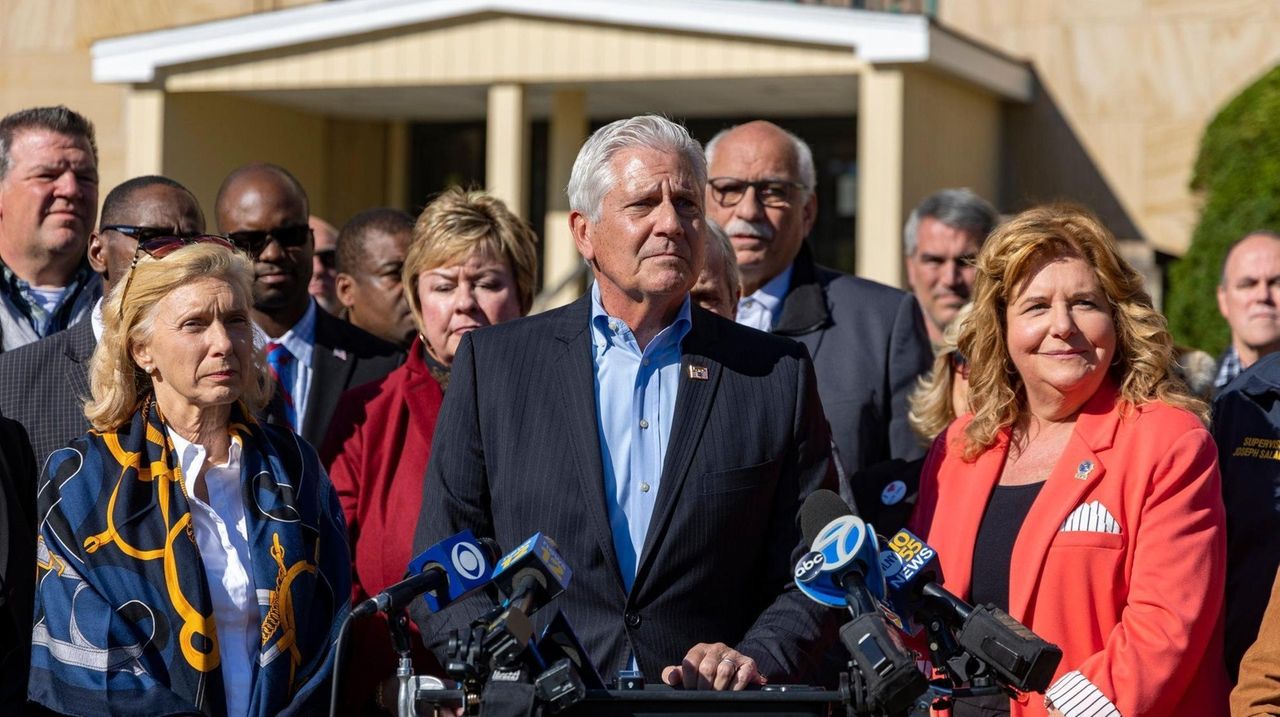 Blakeman's success came as part of a Republican tide on Tuesday that swept numerous local races on Long Island, including Nassau and Suffolk district attorneys.

At a news conference in Mineola on Wednesday, Blakeman, surrounded by GOP leaders and newly elected lawmakers from across the county, pledged to implement an agenda focused on reducing crime, lowering taxes and fixing the property tax reassessment system.

But Curran was not ready to vacate the Theodore Roosevelt Executive and Legislative Building in Mineola yet.

"There are many thousands of absentee ballots that still must be counted — with more coming in," Curran said in a statement. "This is not over and we must trust the process. Every Nassau resident who participated in this election is owed the opportunity to have their voice heard. I have faith in Nassau County and the good work we have accomplished over the last four years. The residents of Nassau have taught a master class in resilience, and I have plenty in reserve."

Curran's campaign did not respond to multiple interview requests Wednesday.

Party leaders acknowledged it will difficult for Curran to overcome a 11,834-vote deficit.

As of Wednesday evening, the Nassau Board of Elections had received 21,844 absentee ballots out of 38,422 requested.

Of the absentee ballots that had been returned, 12,369 were from registered Democrats, 6,137 were from Republicans and 3,338 were from voters with no party affiliation and smaller parties such as the Independence Party. Absentee ballots postmarked no later than Tuesday can continue to arrive by mail to the counties until Nov. 9.

"We feel confident Bruce will be successful once we go through the absentee ballots," said Nassau GOP chairman Joe Cairo.

Nassau Democratic Party chairman Jay Jacobs said the race is not over and he's waiting on the absentee ballot count, along with an audit of all voting machines.

"And then we will see where that takes us," Jacobs said, drawing a parallel with the 2009 county election, when Republicans swept into power after Edward Mangano secured an upset win over Democrat Thomas Suozzi after absentees and a recount. "Keeping Laura Curran is an uphill endeavor, but certainly possible. We just have to see where the votes are."

Jacobs, who doubles as chairman of the State Democratic Party, said he was surprised by Curran's struggles, noting that internal poling showed her up 20 points as late as last week. But poor Democratic voter turnout — combined with a wave of Republican victories in Virginia, New Jersey and Pennsylvania — was likely too much for Nassau's first female county executive to overcome, he said.

"[Curran] was more moderate; got police endorsements and was strong on crime and safety," Jacobs said. "She outperformed others on the ticket with her. She was able to distinguish herself. But not strong enough to make it a clear win."

GOP officials, however, said Democrats were on the wrong side of many key issues, from bail reform to tax relief to mandatory masking of children in schools.

"The two things the residents of Nassau County are most concerned about — safety for their children and grandchildren and this financial mess that we have now," Cairo said.

Blakeman, a former presiding officer of the Nassau Legislature who has endured defeats in runs for Congress, Senate and state comptroller, said voters were "fed up" with progressive policies and were ready for a change.

"It's been a long journey but … we had the right message," he said. "We were on the right side of the issues and I just feel that it resonated with the people of Nassau County. And I don't think it's so much about me. I think it's about the issues and the principles and the values of the Republican Party that carried the day."