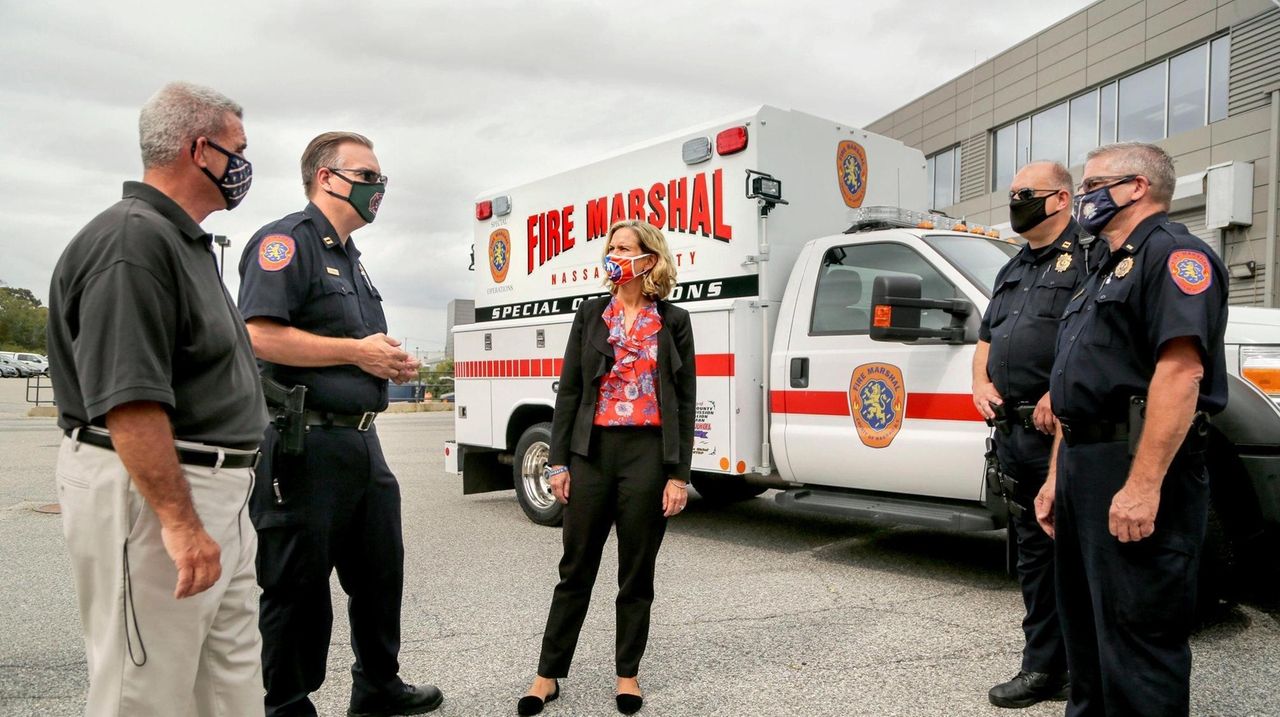 Hempstead Town received significantly more for coronavirus expenses than Nassau County due to a quirk in the federal law. Newsday spoke to County Executive Laura Curran and Hempstead Supervisor Don Clavin on Thursday, to get their reactions. Credit: Newsday / John Paraskevas

A quirk in federal law that allowed Hempstead Town to receive significantly more for coronavirus expenses than Nassau County has touched off a tug-of-war between County Executive Laura Curran and Hempstead Supervisor Don Clavin that appears to have no end in sight.

Hempstead, the only town in the United States large enough to qualify for federal CARES Act funding, received $133 million while Nassau, with nearly twice the population, got only $103 million, federal records show.

The size of the Hempstead's pot of money has set off a sort of funding frenzy: Villages, libraries, colleges, food banks, a ministry and a bridge authority filed pandemic expense requests with Clavin, a Republican who long has butted heads with Curran, a Democrat, over Curran's countywide property reassessment.

"It’s not stopping," Hempstead Comptroller John Mastromarino said of the requests for money.

The uneven distribution of money stems from rules governing the $150 billion Coronavirus Relief Fund in the $2 trillion federal CARES Act, which was signed into law in March, county and town officials said. The relief fund provides direct payments to local governments.

The law says local governments are eligible for funding if they have populations of 500,000 or more.

According to U.S. Treasury Department guidance, if two local governments with populations greater than 500,000 apply for funding, and one is located within a larger municipal entity, both are eligible for payment.

A Treasury Department representative said Hempstead received funds based on its population.

Under the law, municipalities must spend their CARES money by Dec. 30.

Officials in Nassau, with a budget of $3.5 billion this year, say federal funding rules resulted in a disproportionate share of CARES money going to the town, while the county was severely shortchanged.

In an effort to claim some of Hempstead's federal money, Curran recently sent Clavin a letter requesting $49.5 million to cover county police costs for "aiding residents" in Hempstead during the pandemic.

Without the funding, the county would be "unable to assist the combined thirty-four school districts in Town of Oyster Bay, Town of North Hempstead, and cities of Long Beach and Glen Cove, as well as police departments, fire services, and colleges in those locations," Curran wrote.

"When you think about what the county does in something like a pandemic, what we just experienced, we’re the ones with the health department, we’ve got the medics and the ambulances, we have the morgue, the M.E.," Curran said in an interview.

Hempstead, with a $437 million budget for 2020, does not have to fund major agencies that responded directly to the pandemic, such as a health department or medical examiner’s office. So far, it has distributed nearly $22 million in CARES Act money to local universities, hospitals, food-assistance providers and others.

The town also is far less reliant than Nassau on sales tax revenues, which fund 40% of the county's annual budget. In Nassau, sales tax revenue dropped by 10.4% from January to August compared with the same period last year, according to a report last week by state Comptroller Thomas DiNapoli. That represented a loss of $82.4 million.

Municipalities cannot use CARES Act money to plug budget holes caused by losses of revenues such as sales taxes, according to Treasury Department guidance.

For Nassau, which spends millions of dollars a year on agencies that directly responded to the virus, averting a fiscal crisis is at the top of the agenda.

County officials say Nassau, which projects a $749 million deficit this year and in 2021, due in large part to reduced sales tax revenues during the economic shutdown, has incurred tens of millions of dollars in pandemic-related expenses, including for health care and expansion of the morgue at the county medical examiner's office. The county already has earmarked all its CARES money, Curran administration officials said.

According to town records, Hempstead has distributed $21.885 million in CARES money to institutions and companies including:

The town also approved $1 million to hire H2M Architects + Engineers, of Melville, to provide recommendations for touchless bathrooms, partitions and other anti-COVID-19 upgrades at town facilities.

Other organizations that have asked Hempstead for CARES funding include:

Nassau County has devoted the bulk of its CARES funding to covering salaries for employees who "substantially" responded to the virus, under guidelines drafted by County Attorney Jared Kasschau.

Top Hempstead officials defended their use of CARES money.

"There [are] two things that were very, very clear," Mastromarino said. "This had to be used for COVID mitigation, in our community, which is the Town of Hempstead, and it could not be used to offset expenses that were already in your budget — so pretty serious restrictions."

Said Clavin: "We're not simply handing someone a check."

The town, "just submitted an app to the feds and this is what they granted us. And so far, look at all the good things we've been able to do — from feeding tens of thousands of people, helping the hospitals to opening up testing facilities."

Officials in the office of Sen. Chuck Schumer (D-N.Y.) said they "pushed to distribute the money to prioritize the primary jurisdiction of COVID response [Nassau], but Treasury rejected this approach."

Rep. Peter King (R-Seaford) acknowledged Nassau may have gotten the short end of the stick.

"The county obviously has the major expenses — they have the police, they have the health department, they have so much stuff, so many expenses, and the county has not gotten nearly enough money to offset those expenses," King said.

But King also said that Clavin, "once he got the money, he has an obligation" to town taxpayers.

Curran and other Nassau officials said they were baffled the disparity in CARES disbursements to the town and county.

But Curran said: "My personal feelings aside, the fact is this was an anomaly in the law, and it is what it is, so now we have to deal with it."

Clavin declined to discuss Curran's request for the $49.5 million to cover police costs in Hempstead during the coronavirus pandemic, citing continuing talks with Curran.

Although they have been at odds before, Curran and Clavin say they have a good working relationship.

As Hempstead’s receiver of taxes before becoming supervisor, Clavin criticized Curran’s countywide property reassessment, saying it was "bungled" and that there were "errors."

County officials and experts said reassessment dramatically improved accuracy of the assessment roll, and made it easier to defend the roll in court.

In Suffolk County, the flip side of the situation is playing out.

Suffolk secured $257 million in CARES Act funding, all of which has been allocated for public health and safety expenses associated with the pandemic, according to Derek Poppe, a spokesman for Suffolk County Executive Steve Bellone.

In August, the Suffolk Town Supervisors Association, representing the leaders of the county's 10 towns, wrote to Bellone asking him to use federal CARES Act funding to open more free testing locations countywide.

Bellone's administration did not dismiss the request outright, saying more sites would be opened if necessary.

Poppe said the "initial round of disaster assistance funds did not come close to mitigating the cost of responding to COVID-19 and we wholeheartedly agree with our partners in Town government and join them in calling on the federal government to deliver additional federal disaster assistance without any further delay, including funds for local municipalities."

Rep. Lee Zeldin (R-Shirley) said he would press for a fix to the funding problems in any future federal COVID-relief legislation.

Zeldin said there should have been no population threshold in the CARES Act, and "these towns and villages should have received direct aid, and not have to go to the county and ask for assistance."

Watch: Local business leaders discuss LI's economic recovery LI resource guide if you need financial, legal or other helpThe coronavirus has upended the national and local economy, but there are still plenty of resources available for those who need help. Guide to financial and legal help for small businessesThese are resources to help small businesses on Long Island as they recover from the impact of the coronavirus. See what percentage of people around you are fully vaccinatedSee vaccination rates by ZIP code, and more COVID-19 data.