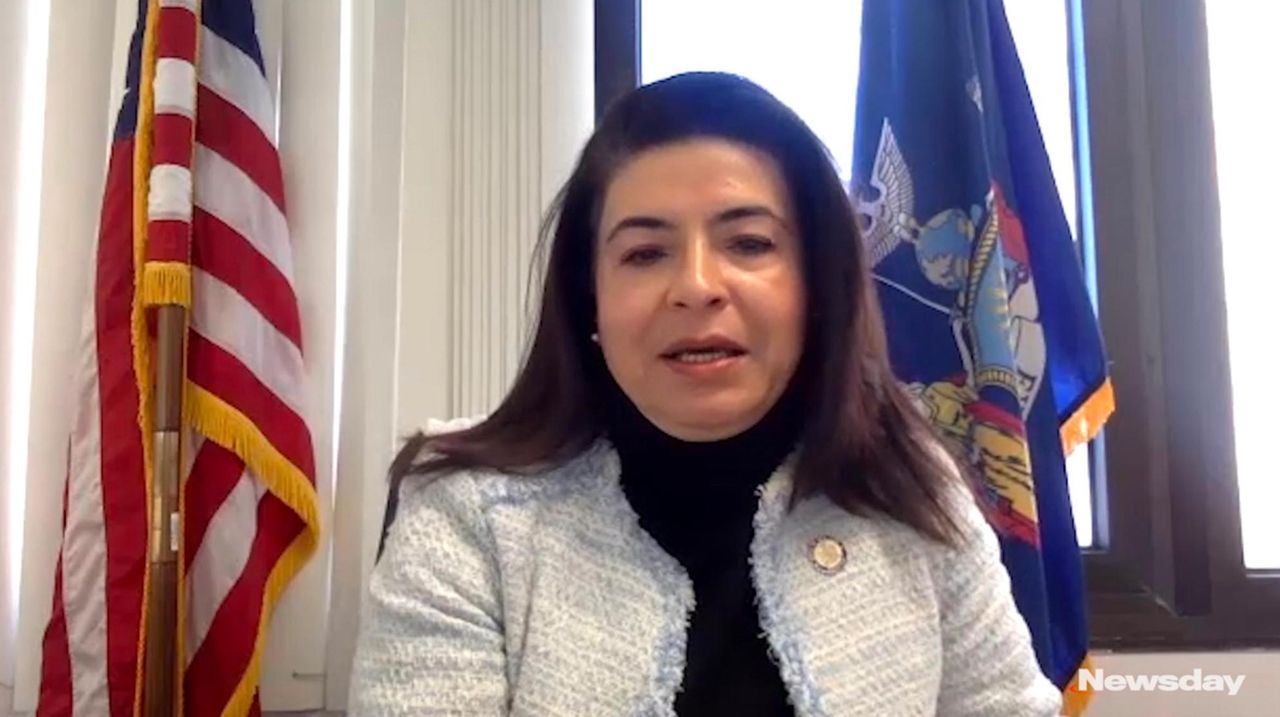 State Sen. Anna Kaplan (D-Great Neck) is sponsoring legislation that would bar hanging hate symbols, such as the Confederate flag, and political signs and banners in public buildings or on public equipment. Credit: Newsday

A state lawmaker from Long Island — motivated by fire departments that displayed the Confederate flag on equipment and in station houses — has introduced legislation that would ban the sale and display of hate symbols in buildings or on equipment owned by fire districts, school districts, police departments, towns and counties.

State Sen. Anna Kaplan (D-Great Neck) is also the sponsor of legislation that would prohibit the display of political campaign banners, flags, signs and stickers in public buildings and on public equipment.

Kaplan said she was moved to draft the legislation after learning that a Confederate flag — the symbol of the slaveholding Confederate States of America during the Civil War — had hung until a few years ago in a Levittown Fire Department house, which is now decorated with a Trump flag. The lawmaker said the bill was also motivated by a Brookhaven Fire Department truck decorated with a Confederate flag that participated in a Patchogue parade last summer.

"Our goal is really making sure that any public facility that is being paid by taxpayers is a facility that every resident of every color feels comfortable and safe in," Kaplan said. "A lot of fire departments here in Nassau and Suffolk are volunteer fire departments. We want to encourage everyone to feel good about coming in and applying and being a volunteer. To have a Confederate flag in a fire department clearly is not a flag that says, ‘All are welcome here.’"

"The chief and the Board fully support legislation that makes it less likely that symbols of hate will be displayed in our community," Frank said in a statement. "The Brookhaven Fire District and Fire Department embrace the diversity of our community and support efforts to make the fire service and our society more inclusive."

Monique Fitzgerald, an activist from Bellport who drew attention to symbols of the Confederacy on fire department equipment in August when she posted a photo of the Brookhaven fire truck on social media, said she was "excited" about Kaplan’s bills.

"This is exactly what we wanted when we protested against this last summer," said Fitzgerald, who called the Confederate flag "an aggressive form of racism."

"When I seen those things, I feel like I am in a hostile environment," Fitzgerald said.

There are no current state laws forbidding the display of hate symbols — which the proposed legislation says includes "symbols of white supremacy, neo-Nazi ideology or the Battle Flag of the Confederacy" — in state or local government buildings or on taxpayer-purchased equipment such as fire trucks, Kaplan said.

"Any symbol of hate, Nazis and white supremacists have no place in our society," said Tracey Edwards, the Long Island regional director of the NAACP, who supports the bill.

"Government and politics should never mix, and any property owned by the taxpayers should never be used to promote a political candidate, no matter who they are or what party they belong to," Kaplan said. "It's time we strengthened our laws to protect our public spaces from these kinds of abuses."

The Trump flag hanging in the Levittown Fire Department’s Station 3 is in front of a window and was visible from North Wantagh Avenue this past week. Kaplan said she has seen photos of a Confederate flag hanging in that same firehouse in the recent past.

Levittown fire officials did not return requests for comment.

The Levittown Fire Department drill team’s nickname is the Rebels, and its logo for many years was a bearded man dressed in a gray Civil War uniform clutching a Confederate flag. Levittown Chief Al Williams told Newsday last year that the department had removed Confederate symbols from buildings and equipment.

Brookhaven Fire Department officials apologized last year after the Brookhaven truck decorated with a Confederate flag participated in a 50-department parade in Patchogue, held for a longtime firefighter who was struggling with cancer.

Frank said the decision to decorate the truck with a Confederate flag was made by one firefighter who later resigned and was not authorized by department leaders. Another firefighter who rode on the Confederate-clad truck also resigned.

"The chief and the board have worked with the Suffolk County Division of Human Rights to develop and implement a sensitivity training program for members of the fire department so all members understand the concepts behind why certain objects are considered symbols of hate and have no place in fire departments and other governmental entities," Frank said.