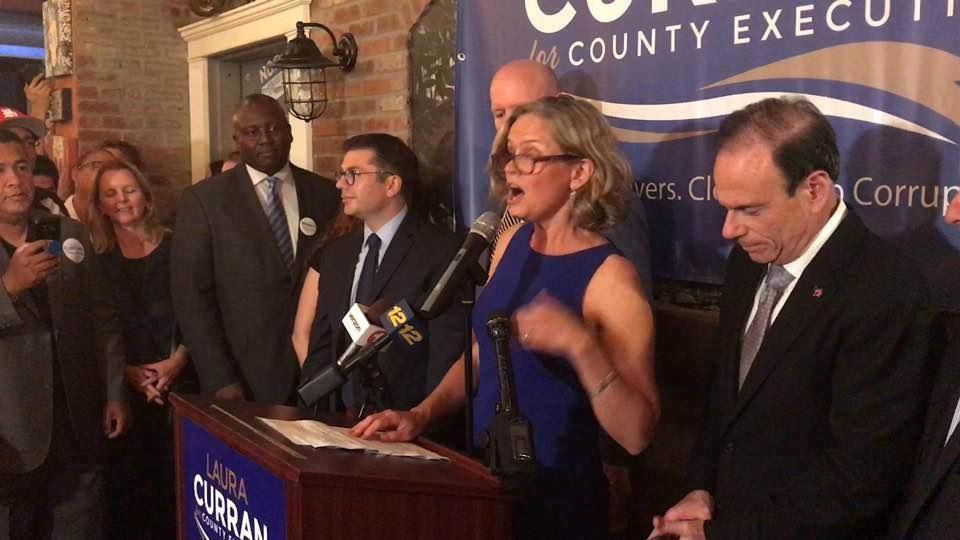 Curran, a Baldwin resident who has been on the legislature since 2014, declared victory just after 10 p.m. before a crowd of supporters at Nawlins Seafood Co. in Freeport.

County elections board results, as of 11:30 p.m., showed her leading Maragos by roughly 54 percentage points with 56 percent of districts reporting.

“We cannot ignore the challenge that awaits us. We are facing a political machine that has proven it knows how to win,” Curran, 49, said of the Nassau GOP. “We know all too well what those victories have meant: corruption scandal after corruption scandal.”

In his own speech to supporters Tuesday night, Martins said he wanted to focus on addressing how to fix county finances and attracting new business over railing against current leadership.

“My opponents want to make this election about the past. We want to make it about the future,” Martins said from his campaign headquarters in Franklin Square.

Maragos, who was elected comptroller in 2009 — and left the Republican Party last year — conceded defeat after 11:30 p.m. In an interview, he said the lack of party support made his campaign difficult. “You can never underestimate the power of having the establishment behind you,” he said.

Maragos said he would support Curran in the general election.

Though he has held countywide office since 2010, Maragos had run an “outsider” campaign after Nassau Democratic chairman Jay Jacobs in January endorsed Curran over him.

But beyond the similar messages, they ran very different campaigns. Curran, a former newspaper reporter and Baldwin school board member, touted endorsements from Jacobs and nearly every elected Democrat in the county and has raised more than $1 million, including tens of thousands of dollars from developers and county vendors.

Their total fell far below 2013, when former County Executive Thomas Suozzi and businessman Adam Haber combined to spend $3 million. Turnout in 2013 was 9 percent of registered Democrats.

Tuesday’s numbers are expected to be even lower than that. In low turnout elections, loyal party voters tend to carry more influence.

Curran, with more of an eye on the general election, did not run any primary television ads. She frequently attacked Maragos for his past support of Mangano and previous Republican positions.

Maragos has said that his views had evolved over recent years to align with Democrats. He often criticized Curran for being the hand-picked “puppet” of “party bosses.”

But Curran rebutted those attacks by saying she was proud to have support from the Democratic committee.

Now — in Martins — she will face a candidate who also has the full backing of his party.

With John Asbury and Khristopher Brooks