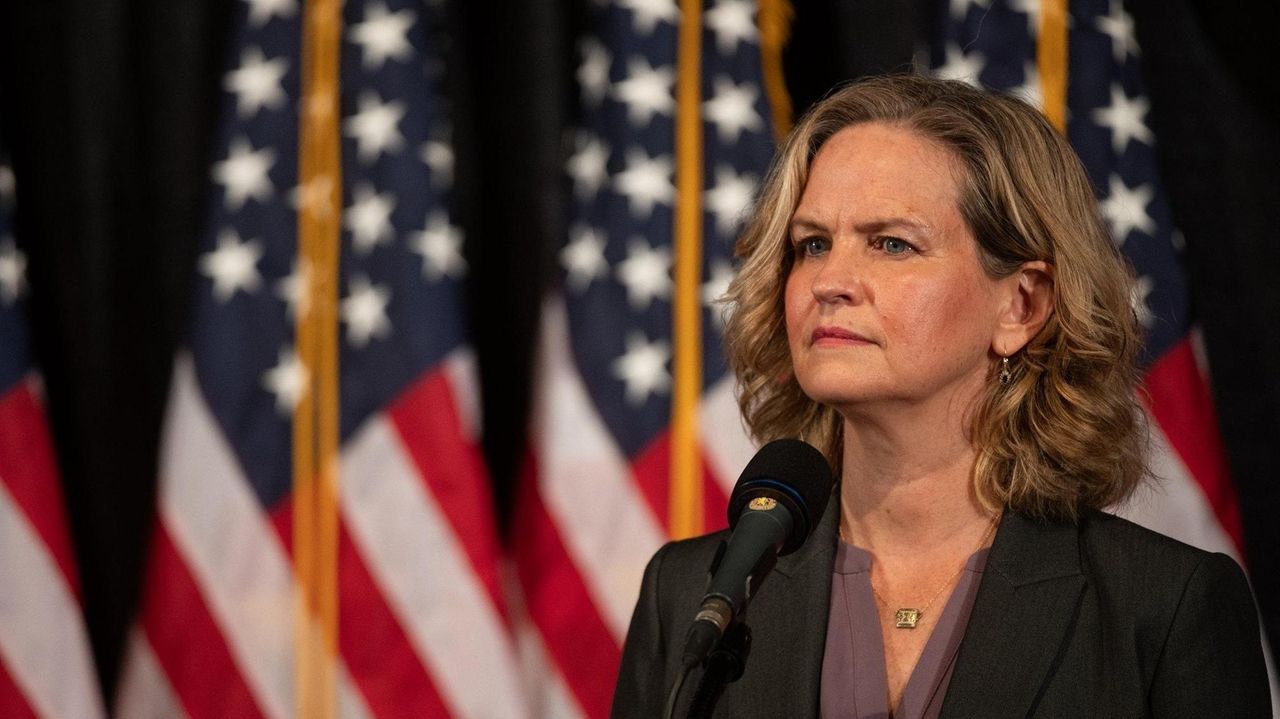 Nassau County Executive Laura Curran said her administration is "seizing this once-in-a-century opportunity to come back stronger than we ever imagined" but acknowledged the hardships of the past year in a "State of the County" address Wednesday night.

Curran, 53, a Democrat from Baldwin, is finishing her first term and is running for reelection in November.

She will face Republican Bruce Blakeman.

"Local governments like Nassau County have been on the front line this past year, and the pandemic only underscored just how important a functioning government is," Curran said.

"I believe government can work for the people, but only when it's honest, transparent and responsive," she said.

Curran asked for a moment of silence for the more than 3,000 county residents who have died in the coronavirus pandemic, and thanked front-line workers, particularly in the county Health Department.

Curran said 32% of Nassau residents have had at least one vaccine dose. The priority "in the weeks and months ahead" is to get every eligible resident vaccinated.

She noted success in partnering with "trusted community messengers" such as educators and clergy who have helped build confidence in the vaccine.

Curran also touted the work of an economic advisory council formed at the beginning of the pandemic to guide her administration on "a pro-business response."

Nassau County has awarded grants of up to $10,000 to more than 200 restaurants, and her administration had pressed to loosen state restrictions so malls, barbershops and nail salons could reopen safely, Curran said.

"I've advocated for businesses that have followed the rules and are just trying to get by," Curran said.

Curran briefly noted two issues that likely will be prominent in the county executive campaign: Her countywide property reassessment and collective bargaining agreements with three of the county's five major public employee unions.

She said the county "does not collect an additional cent of property taxes" under reassessment, and she wants "to settle these contracts and provide certainty for our workforce on wages and benefits."

She said Nassau ended fiscal 2020 with a $78 million surplus and noted the refinancing of debt held by the county and its financial control board, the Nassau Interim Finance Authority.

Legis. John Ferretti (R-Levittown), speaking for majority Republicans in the County Legislature, said "there's still a sharp contrast between the vision of the Republican majority and the Curran administration on many key issues."

Ferretti disputed the county's surplus, calling the debt refinancing "a massive undertaking that will saddle our children and grandchildren with overwhelming debt."

But Curran praised her administration's accomplishments.

She said she was "proud to announce that for the first time in history" the county's police officers will wear body cameras.

She also said: "We should never be afraid to talk about ways to improve policing — but there will be no defunding the police in Nassau County."

Both Curran and Ferretti said they were positive about Nassau's future.

"Let's not return to normal," Curran said in closing. "Let's be better. Let's think bigger and bolder. If anything, this past year has shown us what we can achieve."