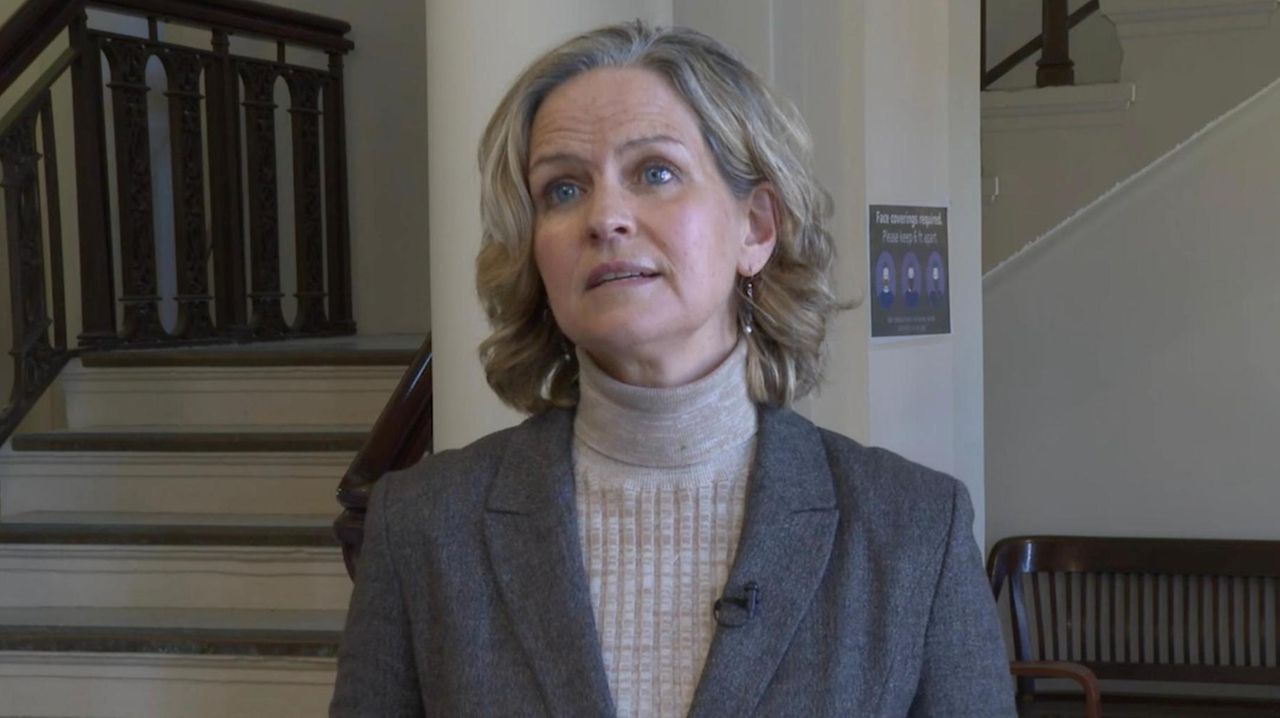 Nassau County Executive Laura Curran is getting blowback from activists and Democratic allies for pushing foward with police union contracts before the county files a police reform plan with the state in April. Credit: Newsday / Steve Pfost, Ed Buccio; Zoom

Nassau County Executive Laura Curran is heading into an election year facing sharp criticism from activists and fellow Democratic Party members in the county legislature as she pushes to pass police union contracts before the county files a police reform plan with the state in April.

Curran is getting blowback from traditional allies inside and outside the party for pressing to finalize labor agreements with major county law enforcement unions, all of which have been without contracts since Dec. 31, 2017, just before Curran took office.

Nassau approved a deal with the Detectives Association Inc. in 2019. An 8½-year pact with the Superior Officers Association went into effect in December.

But members of the Police Benevolent Association, the county's largest law enforcement union with nearly 1,600 members, rejected their proposed contract by a narrow margin in December.

Also unresolved is a new contract with the Sheriff's Correction Officers Benevolent Association.

Community advocates for changes in police practices, along with the three Black county legislators, say Nassau should complete a police reform plan due to be filed with state by April 1 before finalizing cop contracts.

That way, policy changes can be cemented in union agreements, they argue.

"If they've been without a contract since 2017, there’s no harm in waiting" until the state reform process is complete, said Shanequa Levin, co-founder of LI United to Transform Policing & Community Safety, a coalition of activist groups.

"The message [to Curran] would be to really listen to the people’s voice and the people who have marched in the streets," Levin said. "They have protested because they want real structural changes to policing."

Civil rights attorney Frederick Brewington said, "to think that at this point you have to make a contract and not use the … months until April 1 to work on police reform, it not only bends the trust, it breaks the trust."

Curran says police contracts should be handled separately from the policing reforms.

"I am eager to get the contracts done because I want to give clarity to our employees and to our taxpayers," Curran said.

"Contracts are about compensation," and "appearance" rules governing how often officers must show up for patrol duties or training, Curran said.

"The things that we're talking about, extra training, policies, procedures — that's management prerogative," Curran said. "That's outside of the bounds of a contract."

In Nassau, however, police union agreements often govern implementation of specific policies such as the use of body cameras.

In 2015, when then-Nassau County Executive Edward Mangano and then-acting Police Commissioner Thomas Krumpter proposed the purchase of body cameras for 31 patrol officers, the state Employment Relations Labor Board placed a 90-day moratorium on the program.

In a complaint to the board, the PBA and SOA said the county had failed to include the unions in conversations about the rollout of the camera program, which never went forward.

The debate over the timing of police contracts comes as the Curran administration tussles over the contents of the county report to the state with many of the activists and county lawmakers who object to the push to complete police union contracts.

The order requires municipalities with law enforcement officers to evaluate their use of force, crowd management techniques, anti-bias training and response to citizen complaints, or risk the loss of state funds.

Within hours, members of community advisory committees, including Brewington, Levin and NAACP Long Island regional director Tracey Edwards, resigned from the panels, saying they had not been consulted adequately during the drafting process.

The debate about the Nassau police contracts and their relationship with the state policing reform plan also comes as Curran prepares to seek reelection in November.

As a freshman county executive, Curran needs a unified Democratic Party to help her fend off an expected challenge from Nassau Republicans, who have not named a candidate. In 2017, all the county police unions endorsed Republican Jack Martins in his unsuccessful campaign against Curran.

Curran also is trying to restart negotiations with the PBA, whose leaders have said little publicly since their members shot down Curran's contract offer.

Lee Adler, who teaches at Cornell University's School of Industrial Labor Relations, said Curran is in a tight spot politically as a centrist Democrat.

Advocates for communities of color "feel that they're voiceless and all of their efforts to try to create a broader sense of racial justice on the Island are being overlooked by a Democratic Party county executive," Adler said.

Curran may have been "hoping to make labor peace with the unions, at least so that some parts of the membership would see her as friendly and perhaps as somewhat sympathetic to their situations," Adler said.

But as the defeat of the PBA contract showed, "that has not occurred," he said.

"We're the first large union in Nassau County to agree to body cameras," Frassetti said. "We took a major step in police reform by agreeing to body cameras — I think one of the biggest police-reform related issues that we were able to settle and work out a deal with the county."

He said it was "too soon" to say whether his union would endorse Curran this fall.

Nassau PBA president James McDermott did not respond to a request for comment.

"If there are items that are within the contract that need to be negotiated in order to achieve real reform, the county executive’s action has demonstrated that will now be harder to achieve," Edwards said.

Nassau also pledges to collect racial data about motorists involved in traffic stops and increase conflict de-escalation training for officers, according to the draft.

County officials said they consulted with dozens of community members, including activists and clergy members, and held more than 120 input sessions before releasing the draft reform plan.

"I'm very proud of the outreach that we've done; I'm very happy with the input that we've gotten," Curran said. "In that first draft, a lot of that input is already in there, and it's itemized and outlined in such a way that makes it easier for more input to come."

The public has until Feb. 5 to provide more comment on the plan.

A coalition of activists plans to unveil an alternative draft reform program, called "The People's Plan," in early February.

The dispute over the pace of adoption of county police contracts surfaced when the legislature approved a deal with the 350-member Superior Officers Association on Nov. 23.

The GOP-controlled legislature acted on an "emergency" expedited basis, despite requests for a delay by Bynoe, Solages and Abrahams.

Brewington sued in December to stop the SOA deal from taking effect, arguing that the legislature violated its own procedures by expediting the contract vote. Since the county and the union had agreed to the pact in September, there was no real emergency at hand, Brewington said.

State Supreme Court Justice James P. McCormack dismissed the suit on Dec. 28, finding the legislature and the county did not break their rules.

However, McCormack expressed some sympathy for the argument that the state reform process should play out before adoption of the SOA contract.

McCormack continued: " … It may seem likely that by entering into an agreement with SOA that does not include the outcome" of the state reform effort, "the County will not be able [to] enforce those procedures against the SOA and its members when their contract is already completed."

"Put another way, it would be much easier and more logical to include any such procedures in the contract with SOA," McCormack said. "But as logical as those statement[s] may seem, they are not proof that the terms of Executive Order 203 will not be complied with. That it seems likely does not make it so."

Jay Jacobs, chairman of the state and Nassau County Democratic Party, said activists and county lawmakers shouldn't have tried to tie the contract and police reform issues together in the first place.

"You have well-intentioned, reform-minded groups that are looking to say, ‘Do nothing for the cops until all of the reforms that we want are implemented,’" Jacobs said.

"And I think they’re conflating two different things. One is a labor agreement, which is long overdue, which has been negotiated and will not interfere with, and in some respects, will help implement reform," Jacobs said.

But Doris Sharpe, 60, a longtime Hempstead community activist and the plaintiff in the case against the SOA contract, said law enforcement unions "have to be made to sit at the table, before a contract is settled, because then how can you negotiate if it’s already settled?"