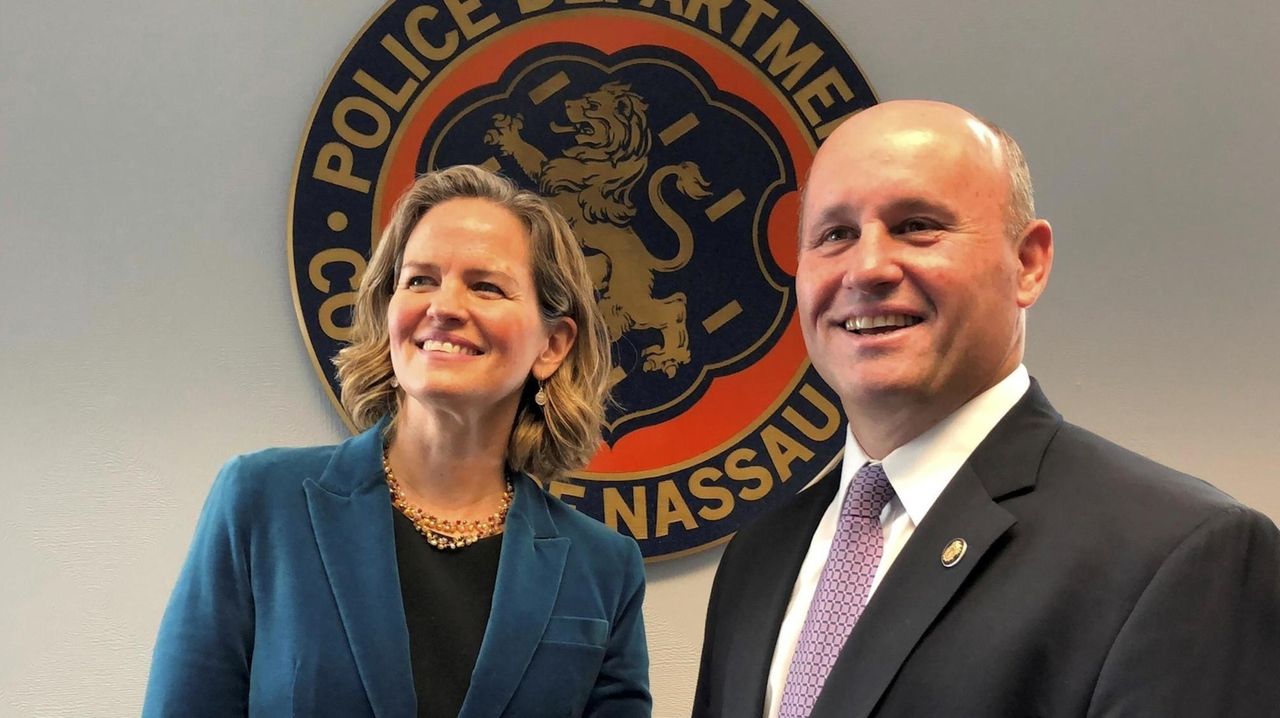 “Given this responsibility, I do not take it lightly,” said Ryder, 55, flanked by his chiefs as he spoke to fellow officers at police headquarters in Mineola. “I will be engaged 24/7. I will do what’s right by the people of Nassau County and do what’s right by all of you, the membership, that work here in this police department.”

Nassau County Executive Laura Curran announced the 35-year law-enforcement veteran as her choice to be the next permanent commissioner. Since July, Ryder has served as acting commissioner following the retirement of Thomas Krumpter.

Curran, a Democrat in her first month as county executive, said she considered “many candidates” for the job but was struck by Ryder’s experience, his implementation of intelligence-led policing in Nassau and his strong work ethic.

“I don’t think you could find a commissioner who would work harder and is more passionate about the job than Patrick Ryder — and who has gotten results, real results,” said Curran, previously a legislator from Baldwin.

Curran will formally forward Ryder’s nomination to the Nassau County Legislature, which must vote to confirm him, in the coming days. A vote is tentatively scheduled at the Legislature’s Feb. 26 meeting.

In his first major initiative, Ryder said he would create the Commissioner’s Community Council, an effort to “develop and reinforce trust” between the police department and various Nassau communities.

“We’re going to have a bigger outreach into our community than we’ve ever had before,” Ryder said.

He also announced the appointment of Marianela Casas, a regional representative from Gov. Andrew M. Cuomo’s office, as an assistant commissioner of community engagement. He said Casas will oversee the council.

“The person at the top needs to earn a proper salary and the people under him should not be making more,” Curran said.

Presiding Officer Richard Nicolello (R-New Hyde Park), said Ryder has “a lot of support” in the legislature, adding that he’s been “responsive” to members’ questions and concerns in the past.

If confirmed, Ryder would take the reins of the 2,500-officer department at a time of historic crime lows. Crime is down about 30 percent since 2010, when Ryder created the department’s intelligence center. There were 15 homicides in the county in 2017, down from 23 in 2016.

Despite the upbeat crime data, Nassau has seen a spike in MS-13 violence and opioid overdose deaths, among the many challenges facing the police commissioner.

Ryder will be expected to keep decreasing the department’s once-ballooned overtime budget and help negotiate a labor contract for the department’s rank-and file, whose pact expired at the end of last year.

A popular figure in the department with strong support from the labor union leadership, Ryder patrolled Brooklyn for two years as an NYPD officer before joining the Nassau police department in 1986.

Curran slapped down the notion that she bowed to union pressure to nominate a department insider to the post.

“The unions really had no impact on this decision, I have to tell you,” she said. “One thing that he does have though, is the respect of the department . . . I’m talking about the actual rank and file. And that’s important.”

James McDermott, president of the Nassau Police Benevolent Association, said Ryder is “just a good man” who will help restore the department’s morale.

“I think we’ll have a good working relationship. There’s a middle ground and we’ll find it,” said McDermott, of the impending contract negotiations.

Ryder grew emotional as he thanked his family — wife Jill and three children — for supporting his demanding career.

“I wake and breathe this job everyday,” he said. “I’m very thankful for the county executive for giving me this opportunity.”

Hempstead man convicted of murder in 2018 shooting
New York should follow CDC, ease mask rules, Curran says
1:58
Bellone backs use of anti-Semitism definition
Excelsior Pass a hot ticket — if you can get one from the state
ID theft in New York surged 85% in 2020, DiNapoli says
Couple seeks cure for 2-year-old with rare disease
Didn’t find what you were looking for?