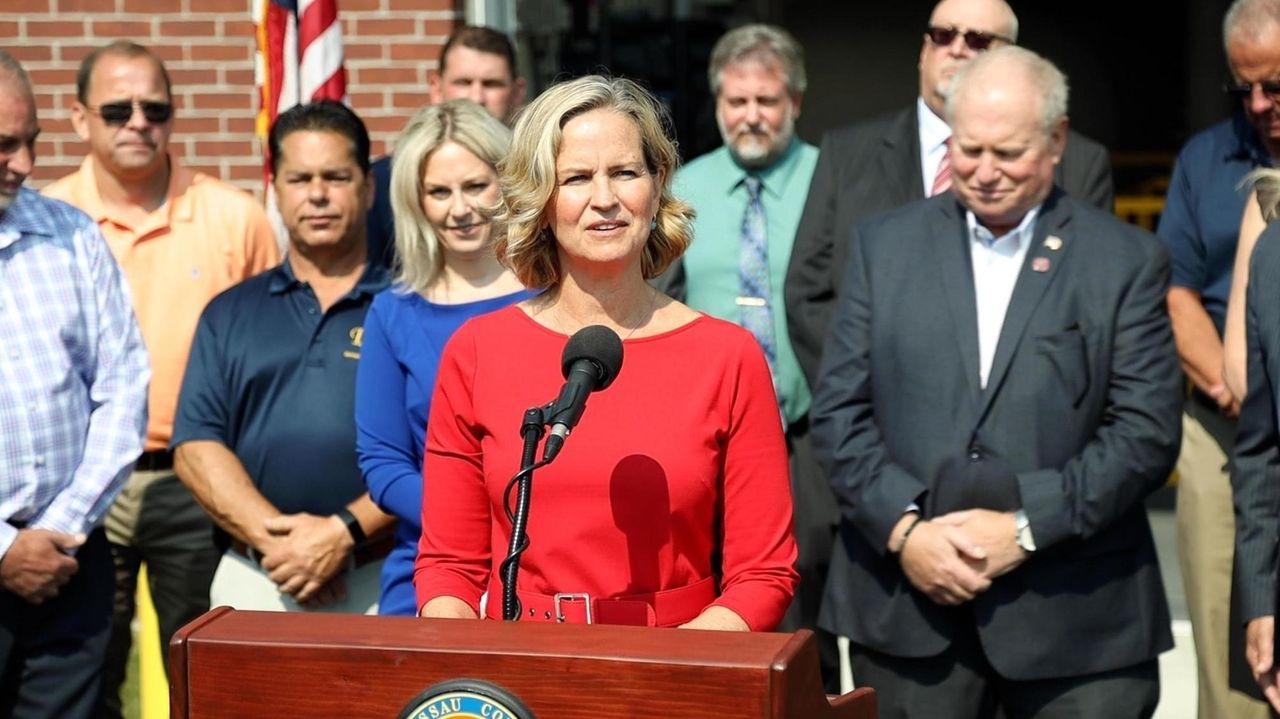 Nassau County Executive Laura Curran, speaking at the Plainview Water District on Wednesday, announced grants of $50,000 from the COVID relief fund will be made available to 30 water suppliers in the county. Credit: Kendall Rodriguez

Nassau County Executive Laura Curran on Wednesday announced $1.5 million in grants will be available to 30 public and private water districts to pay for technology upgrades to remove contaminants such as 1,4-dioxane.

The program, which will provide individual grants of up to $50,000, is part of the county’s $9 million investment in water infrastructure, funded by federal stimulus money in the American Rescue Plan.

Last month, the Nassau County Legislature approved the allocation of $64 million of the county’s more than $190 million in federal pandemic money for infrastructure projects.

Water districts would use the grant money to defray the cost of studying and testing for emerging contaminants, maintenance of systems already in place and the purchase of new technology to ensure drinking water meets federal and state standards, Curran said.

"By assisting water districts with these important infrastructure improvements, we will ensure cleaner water for residents while preventing costs from being passed onto ratepayers," Curran said.

Found in more than two-thirds of Long Island’s public water wells, 1,4-dioxane, which the Environmental Protection Agency calls a "likely human carcinogen," was an industrial solvent used from the 1950s to the 1990s. It was found in paints, varnishes and some shampoos and cosmetics.

In July 2020, New York became the first state in the nation to adopt a drinking water standard for the emerging contaminant.

"Every dollar is offsetting the cost of designing and constructing treatment systems to fight emerging contaminants," Field said. "Our collective responsibility as water providers is to work together to provide the highest quality water."

2:07
Petito attorney: 'Brian, we are asking you to turn yourself in'
Kaminsky calls for firing of top Oyster Bay official
Jon Zaturn, coach at the Suffolk County PAL for 40 years, dies at 69
Lien talks have sale of Wyandanch Rising property on hold
State to provide $3 million to restart home battery rebate program
Comptroller: Work-from-home could cost MTA $500M in revenue
Didn’t find what you were looking for?