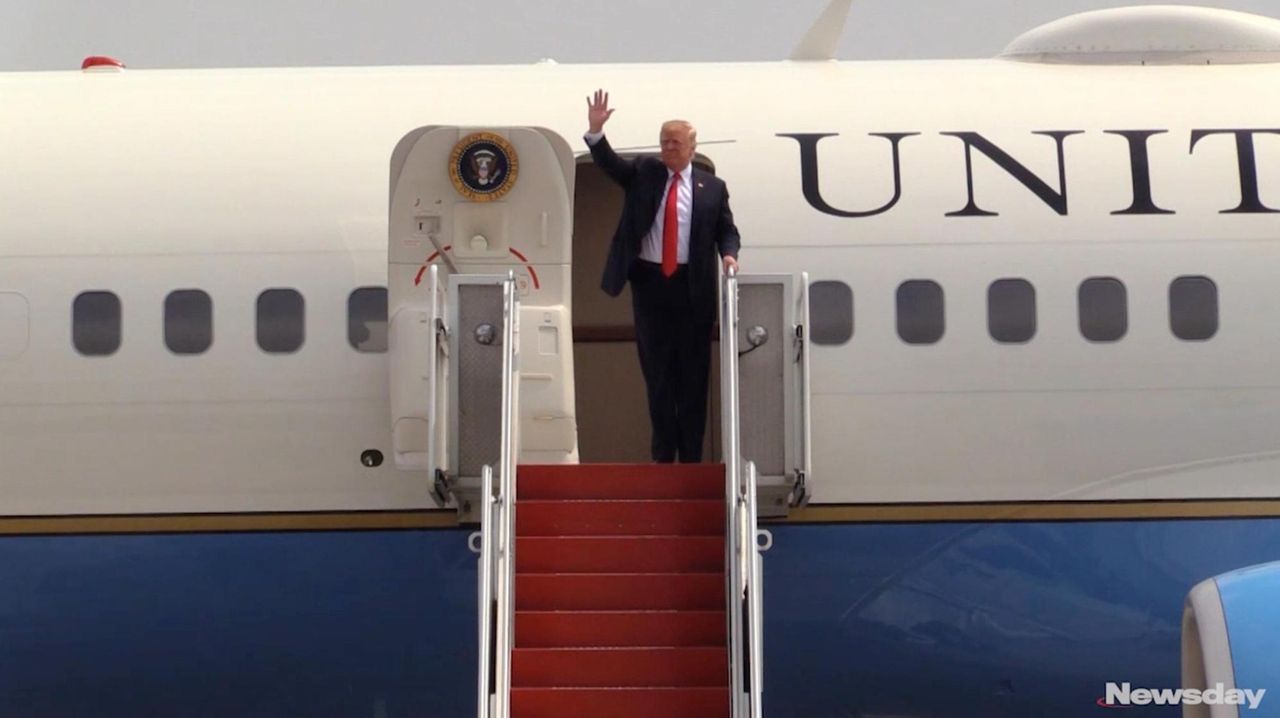 President Donald Trump headlined a fundraiser Friday in Southampton attended by fellow real estate moguls and other supporters who organizers said contributed a total of $3 million toward his re-election bid as well as GOP candidates in this fall's races.

Trump and attendees discussed topics including the federal tax law that Trump signed in December, expansion of private health care options for veterans and deregulation efforts, according to a Republican National Committee spokeswoman.

The fundraiser benefited the Trump Victory political action committee and was closed to the news media.

Trump, who was in the Hamptons for about two hours, was greeted by supporters and protesters as his motorcade left Francis S. Gabreski Airport in Westhampton Beach and then turned onto Halsey Neck Lane in Southampton. Lorber, also executive chairman of Nathan’s Famous Inc. hot dog company, has a summer home there.

Charles Germano, 56, of Mount Sinai, wearing a red “Make America Great Again” cap, showed up at the airport to support the president.

“He’s taking a stand with other nations and wants America first,” Germano said.

“As a businessman, overseas, I can see the trade barriers that we had to enter China,” Mirgorod said. “We obviously have someone who knows business, knows economics and I really think his first interest is the American worker, the American industry and American citizens.”

But protesters near Lorber's home held signs that read, “Arrest Trump for crimes against humanity” and “Rescind Trump’s Security Clearance.” They chanted, “Lock him up” and “vote, vote, vote.”

“He has used this country as his personal, private piggy bank,” said Evelyn Konrad, 90, of Southampton, calling the Trump administration a “kleptocracy.”

Joanne Muller, 52, Southampton, noted that the anti-Trump demonstrators were predominantly women. "We need more women out here because they want to litigate every part of women’s bodies," she said.

Among those who met Trump at the airport were Rep. Lee Zeldin (R-Shirley); Doon Gibbs, director of Brookhaven National Laboratory in Upton; and John Raguso, whose son Master Sgt. Christopher Raguso of Commack, a member of New York Air National Guard’s 106th Rescue Wing, was killed in the line of duty in Iraq last March.

Zeldin, who faces Democrat Perry Gershon in November, rode with the president from the airport to the fundraiser.

The Trump Victory PAC in the past two years has raised about $27.5 million, Federal Election Commission records show.

Trump departed the Hamptons for Bedminster, N.J., where he is set to spend the weekend at his golf resort.

“It’s not very common in the area because we don’t have a lot of these kinds of visits, but it’s certainly not without precedent for high security events or activities,” Dugas said.