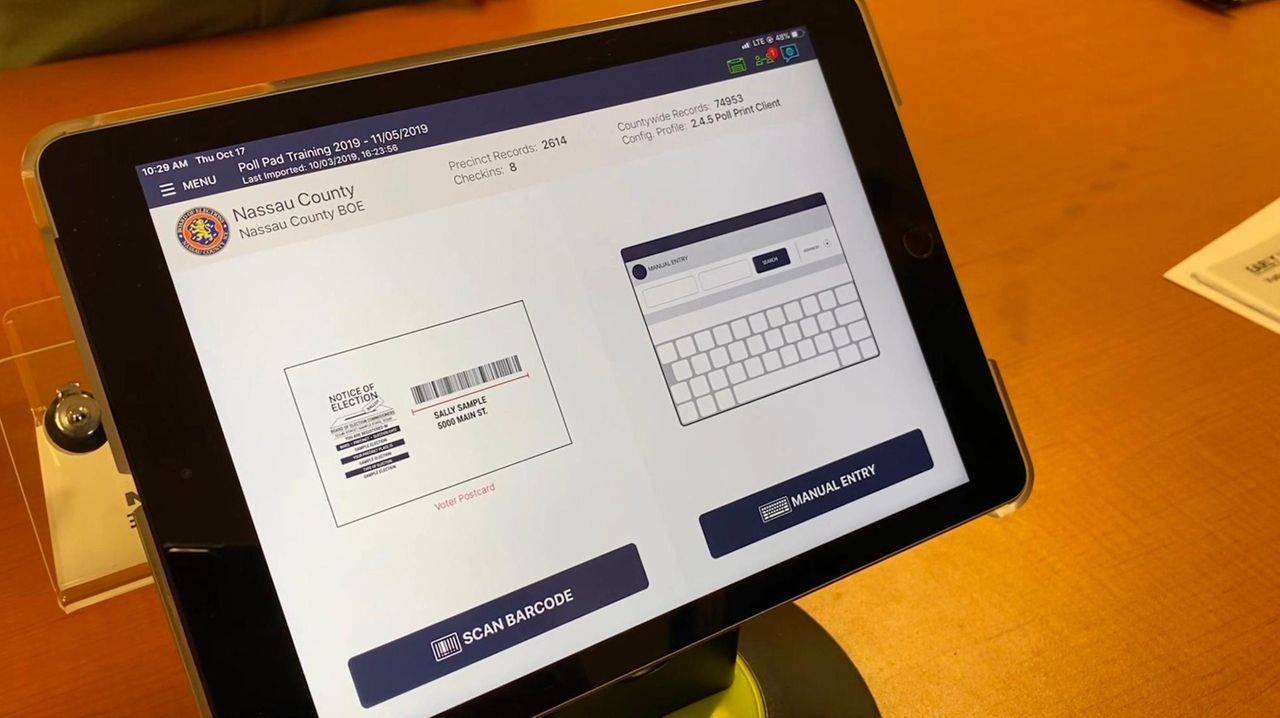 On Thursday, Nassau and Suffolk election officials were testing new voting technology, called the Poll Pad, that the Board of Elections will be using when the state inaugurates early voting on Oct. 26.   Credit: Howard Schnapp

For the first time in New York State, a nine-day period of “early voting” begins Oct. 26.

Election officials will introduce a  variety of new technologies that will be used in early voting and on Election Day, Nov. 5.

Gone are the binders with sheafs of paper on which voters penned their signatures. In their place will be tablet computers with styluses, along with printers that produce “ballots-on-demand.”

Here’s how the early voting system will work:

It's Election Day. Know more about who's running in your district.

When and where can I vote early?

Early voters can cast ballots at any of 15 polling places in Nassau and 10 in Suffolk. Voters can locate the polling places by calling the county boards of elections or visiting their websites.

In Nassau, voters can call 516-571-VOTE. The website is Nassauvotes.com.

How will the early voting system work?

Election inspectors will use new tablets, powered by KnowInk’s PollPad technology, to sign in voters. In the past, voters had signed in on hard-copy lists provided by poll workers.

The tablet system tracks in real time whether a voter already has cast a ballot, syncing to other machines through Bluetooth and wireless network technology.

First, an inspector asks the voter to provide the first few letters of his or her first and last names, which are typed into the system. A list of names appears on the tablet screen, and the voter confirms  the address.

The voter then provides a signature. Democratic and Republican inspectors from the county Board of Elections compare the signature with signatures of the voter from prior elections. Inspectors must validate the voter’s information, including the signature, before providing the voter with a ballot.

A ballot with the races the person is eligible to vote in is produced for each voter.

In Nassau, three printers will be located at each of the 15 early voting sites. The number of printers in Suffolk depends on the size of the township. The Shelter Island polling place will have two printers, for instance, while the Brookhaven Town site will have about a dozen.

What if a voter who cast a ballot during the early voting period shows up to vote at a regular polling site on Election Day?

“The database will show that voter already received a ballot on one of the [early] voting days,” and will not be able to vote, said Suffolk Republican Elections Commissioner Nicholas LaLota.

What will the procedure be for voting on Election Day?

Voters must go to their designated polling sites.

If a voter shows up at the wrong polling place on Election Day, the tablet will warn the election inspector: “Wrong Location.”

The screen shows driving directions to the correct location, which can be then texted to the voter.