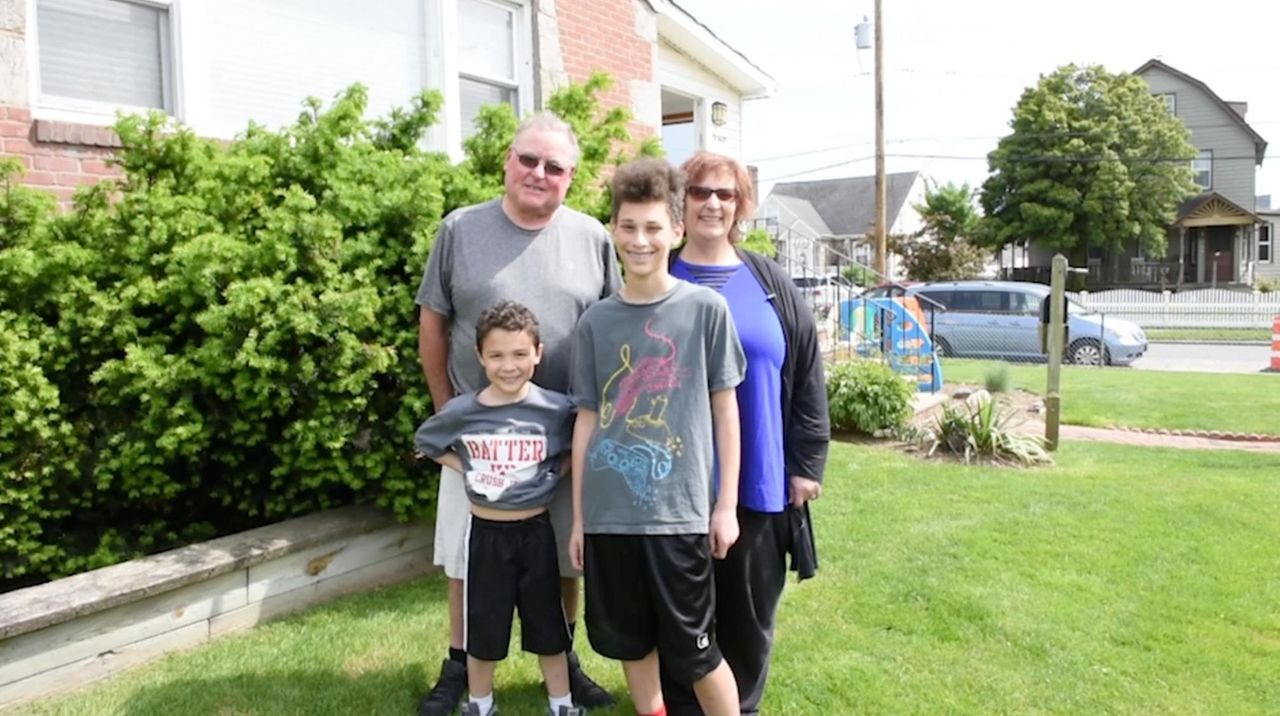 The number of children in foster care in Nassau and Suffolk counties has fallen sharply since peaking in the mid-1990s and early 2000s. Theresa Devlin and her husband, Charlie, have adopted two children and fostered nearly 20 since 2007, says it's “a really good thing" the numbers are going down. Credit: Howard Simmons

The number of children in foster care in Nassau and Suffolk Counties has fallen sharply since peaking in the mid-1990s and early 2000s after the height of the crack epidemic, in large part because of new programs intended for families with children at risk of entering the system, officials said.

New services to help keep families together include mental health counseling and help with housekeeping, budgeting, enrollment in drug treatment and making day care arrangements. Other programs seek to identify family members who can take children in temporarily when their parents are facing crises.

“There’s more asking the family: How can you keep your kids safe? Who do you have in your life that’s a support? What do you think you need to do to be able to keep your kids at home?” said Maria Lauria, director of Children’s Services with Nassau’s Department of Social Services.

When children have to be removed, Lauria said, “the goal is to get the kids home as soon as possible … Foster care itself is a trauma to the kids. It has to be judiciously in place.”

Kari Siddiqui, a senior policy analyst with the nonprofit Schuyler Center for Analysis and Advocacy in Albany, said the number of children in foster care in New York has dropped in part because of, "open-ended funding for preventive services." New York State reimburses counties 62 percent of what they spend on preventive programs, such as home visits, counseling, parenting support, and drug abuse services. The state Office of Children and Family Services provides about $527 million a year for child welfare preventive and protective services.

A Suffolk County initiative launched in 2017 focuses on reducing the time it takes to reunite children with birthparents. The program seeks to improve communication between foster and biological parents, with the goal of sending children home sooner, if possible.

Under the program, visits between parents and their children are scheduled within 48 hours of removal. Instead of taking place at county offices, the visits occur at parks, shopping malls or as children play among bouncy balls at a McDonald’s — locations where the family is used to spending time. There are more visits, and they are longer than before, officials said, and Suffolk has added staff to supervise them.

When children and birthparents are separated for a long time, parents get discouraged and have less incentive to stick with rehabilitative and treatment programs, said Mark Clavin, division administrator for Family & Children Services Division in Suffolk County.

"It can be disheartening when you continue to see your child in someone else's care," Clavin said. "The longer parents go without seeing their children, they start to lose hope in terms of being reunited."

Because of concerns about the disproportionate number of minority children in foster care, the Nassau County Department of Social Services in 2011, began holding “blind removal meetings.” A special committee reviews whether a child should be removed from the home but isn’t privy to the child’s race, hometown or other details that could reveal their ethnic background.

Experts and social service officials also say efforts to place children with relatives or family friends have been key to reducing the foster care population in Nassau and Suffolk.

Foster care is less traumatic for children when they are placed with relatives, experts say. Children who stay with relatives face little interruption in their routines. They often can stay in the same school district and town, and are able to maintain relationships with friends and other family members.

“We’ve long recognized that we needed to be doing a better job in supporting kinship families,” Sheila Poole, commissioner of the state Office of Children and Family Services, said in an interview. The office has set target kinship goals for counties in order to boost the number of family members who agree to take children. Many who do so are grandparents, Poole said.

Since 2014, Suffolk County has offered a course that trains family members to care for relatives' children. The course, “Caring for Our Own,” focuses on how to raise a child who once had a different relationship with caregivers.

Clavin said officials are much less hesitant to place children with family members than a generation ago. Back then, officials' view was, “if the parents had problems, how good could the family members be?”

“Part of the change in philosophy was that we see how traumatic it is for a child to come into foster care," Clavin said. "In general, you're leaving your home, you're leaving your friends, sometimes your school district of origin, and you're going into the home of a well-trained, well-meaning stranger. But if you're able to go into the home of a relative who's been a resource all your life, and who is known to you, it minimizes the trauma involved in having them come out of parental custody.”

Another option, called "direct custody," is used when Family Court puts the children in the care of relatives, instead of into the foster care system, while a long-term plan is devised. In Suffolk, there were 208 children placed in relatives’ direct care during 2018. In Nassau, 19 children were placed in the direct custody of relatives last year.

After a close friend died in 2014, Thomas and Angela Ott of Oceanside watched as the friend’s husband struggled to raise their teenage daughter. In 2017, social services placed the girl, then about 16, in a group home for several weeks of observation.

At the father's suggestion, Nassau County turned to the Otts, who were among several couples close to the girl and her birthparents.

“We really had to think about it, of course,” Thomas Ott, 51, a home improvement contractor, recalled. “You’re taking in someone you have no idea which direction she’s going … You don’t know what she needs.”

Ott said he and his wife accepted the foster care assignment after concluding, “the best place for her was with us, and her mom would have been with us a whole 100 percent … She knew us. She was family with us. She didn’t have to start in with a whole strange family and get used to their house, their rules, their lifestyle.”

Ruth Militrano, 21, of Freeport, was 15 when she entered foster care with her twin sister. Militrano said they had been living in Bay Shore with their mother and stepfather. Her stepfather, now deceased, abused her physically, emotionally and verbally, Militrano said.

One afternoon, the girls were in the car with their mother, when she stopped at a red light. Ruth’s sister got out of the car and Ruth followed. They headed to a friend’s house, where they spent the night.

The girls went to Brentwood High School the next day as usual, although without book bags or fresh clothes. They alerted their teachers and guidance counselors, asking to live with their mother's nephew, Leopold Waight.

The twins were worried a judge would assign them to separate families — “two of us, two mouths to feed, two of everything,” Militrano remembered.

"We needed something familiar and not unfamiliar during that time, because I think it would have been too much for us to bear,” Militrano said.

Waight, 63, had two grown children and was recovering from hip surgery when he heard from the girls in 2013. "It’s one of those things, you get a phone call during the night," he said, recalling he hadn't "seen them for years."

“I just feel that God sent them to me, because I was not going to let them go [anywhere] else," Waight said. He recalled not wanting them to, "fall through the cracks."

Officials say the new programs also have helped keep kids out of foster care as opioid abuse has increased.

Federal officials have expressed concern about parental drug abuse, including opioid use, as they deal with a growing number of children in foster care nationwide, from 396,000 in 2012 to 443,000 in 2017.

In New York, "we've been able to sort of stem the tide and certainly recognize that a lot of relatives have also stepped forward to support and take custody of kin," Poole said. "Foster care numbers exploded during the crack epidemic in the 80s … In spite of that, overall, New York State's foster care numbers continue to decline, which is a vastly different picture than many states across the country."

But for children who entered the foster system before many of the preventive programs were in full swing, "the challenges appear to be even greater than a few years ago,” said Jeffrey Reynolds, president and chief executive of the Family and Children’s Association, a Mineola youth services agency that works with older foster children.

Reynolds said as the children edge toward adulthood, specialists are finding that many have suffered significant trauma and have trouble with personal relationships. In treating such older foster children, workers focus on undoing years of built-up trauma, he said.

“The emphasis used to be on how we find you the right class at [Nassau Community College], or the right apartment or the right job," Reynolds said. "And now it’s more about, 'how has what you’ve experienced shaped how you view the world? How you view others? How you view yourself?'”

She continued, "How sad it is when I speak to some older foster children, who were never adopted, and they went from home to home, and they're like in their 30s, or their late 20s, and they don't have a place to go back to at holidays.”

Andrew Giuliani, son of former mayor, to run for NY governor
Voting begins: Long Islanders decide on board candidates, budgets
Arthur Meyer, a founder of LI's Friends World College, dies at 96
0:48
Survey: Millennials of color unsure if Long Island can meet their expectations
National Grid seeks 2-year rate hike of $5.35 a month
NYC Marathon set for Nov. 7 with 33,000 runners
Didn’t find what you were looking for?