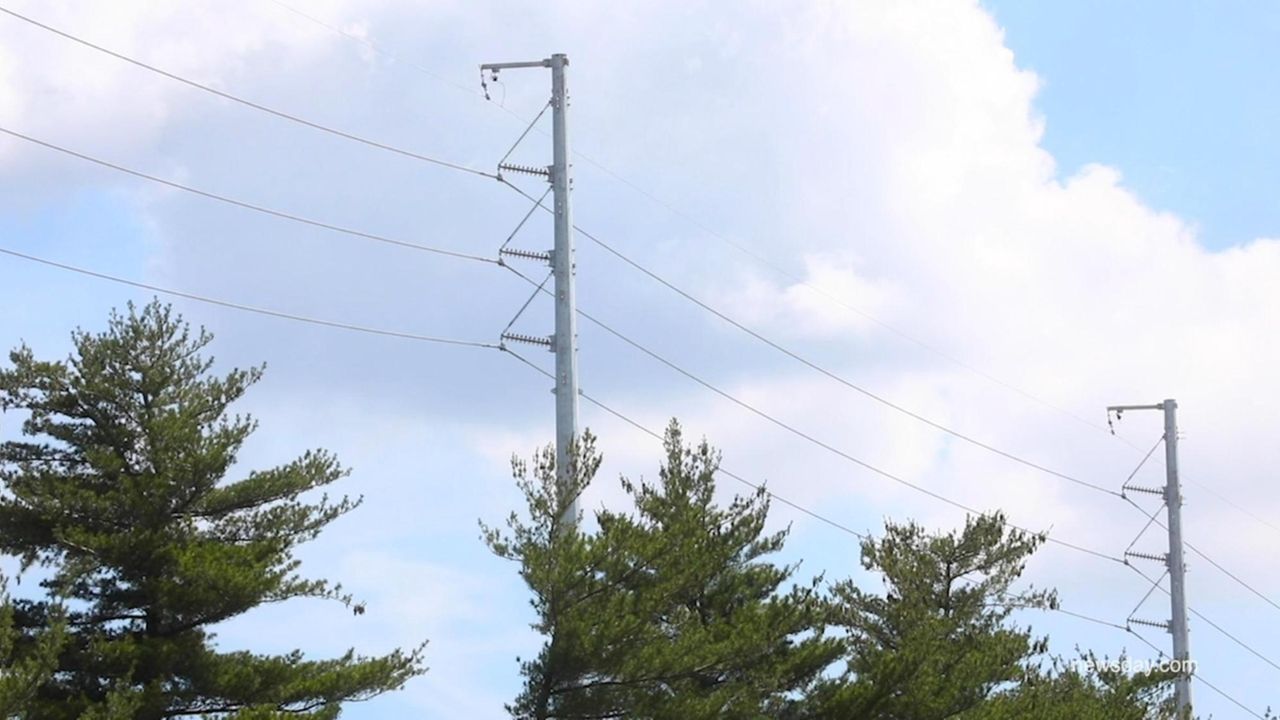 More than a hundred residents and public officials aimed high-voltage condemnation at a row of giant steel utility poles in Garden City Wednesday, and Hempstead Town vowed to sue the project developers if the 120-foot structures aren’t removed.

Officials and residents at the Monday morning rally a stone’s throw from the Merillon Avenue LIRR station charged the poles were installed quickly during the coronavirus pandemic lockdown when residents couldn’t object or fully grasp their size and visual impact. They say they weren’t properly notified of a last-minute design change in the MTA’s $2.6 billion Third Track project that led to the tall poles being installed on the south side of the tracks rather than the north.

“We will not stand for these poles to be standing in this community,” Hempstead Town Supervisor Don Clavin said. He added, "If it has to go to litigation it will go to litigation."

A senior MTA official on Monday said the agency went to great lengths to let residents know what the project would look like and indicated any changes now were not feasible.

“We were very clear about the height of the poles and the general location,” he said.

“You’re not going to change the project midstream," he added, "because there are a number of commitments we made which includes remaining on schedule and on budget” and not taking private property through eminent domain, he said.

“We’re not taking poles … off the right of way,” the MTA official said. “We’re not putting them in another neighborhood or in someone’s backyard. It wouldn’t be right for us to change that.” The poles are owned by MTA, but title could transfer to LIPA in the future.

Clavin said he received a call last week from PSEG notifying him that the pole project “wasn’t done by them.” But he told residents he would hold agencies responsible. “We will not accept this 120-foot nightmare.”

Clavin noted that the 14 poles planned for Garden City (nine are already standing) will be joined by 79 more along the 10-mile third-track project. “It’s not just simply about this community,” he said. “This is about every single community that is along this line” from Floral Park to Hicksville.

Hempstead councilman Tom Muscarella said contractor 3TC and MTA vowed “to do no harm” in completing the project. “But when you put nine-story poles in a two-story community you did us a lot of harm. The poles have got to come down.”

Rich Corrao, a resident who is leading a group called REVAMP, for Residents-Voters Against Monster Poles, called installation of the giant poles “a gross violation of the public trust,” charging they were installed “secretly” during the height of the pandemic.

Kathy Auro, whose house sits directly across from the tallest poles, said she was first notified about them from a neighbor while she was in lockdown. “I said, ‘What poles?’” Then she went out to look. “I couldn’t believe my eyes," she said.

The MTA official said the agency studied the possibility of putting the lines underground, but found it not feasible, noting it would have involved "a lot of disruption" on "property that’s not ours.”

Clavin noted the public pressure that forced PSEG to remove 31 steel poles in Eastport earlier this year sets a precedent for Garden city. “We’re asking for the exact same treatment,” he said.

PSEG has said that while isn’t installing the third-track poles or supervising construction, the contractor is presenting its plans and designs to PSEG in advance “to ensure they meet all codes and standards.”