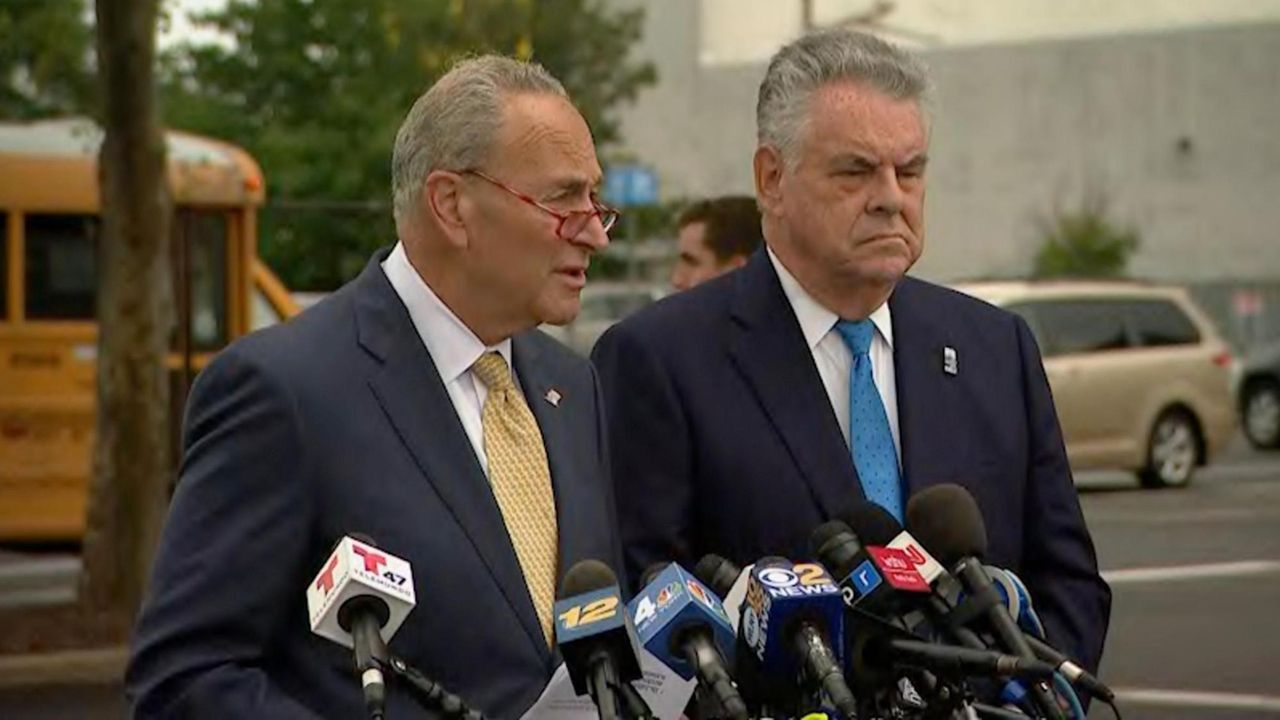 The two lawmakers called on McConnell to bring the Bipartisan Background Checks Act of 2019 to the floor of the Republican-led Senate for a vote, arguing it would immediately save lives.

“We’re saying to leader McConnell, ‘Do the right thing. Gavel the Senate into an emergency session’ so we can take action on the bipartisan already-passed gun legislation,” Schumer (D-N.Y.) said Tuesday in the parking lot of a Walmart in Westbury. “More than 150 days have slipped by since the House passed the bill and all we’ve heard from leader McConnell is silence.”

King (R-Seaford) called the measure “common sense” and said it was essential in preventing individuals with criminal records, a history of domestic violence or who have been adjudicated by the courts as mentally unfit from skirting loopholes in current background check laws to acquire a firearm.

“It’s essential that leader McConnell allow it to get to a vote,” King said. “He does not need to support it. Just let it come for a vote. If anything good can come from the horrible tragedies of this weekend it’s that we get this legislation passed.”

A McConnell spokesman declined to comment on Schumer and King’s messages and instead referred reporters to a statement issued by the Kentucky Republican on Monday in which he directed the chairmen of three Senate committees to study potential solutions “to help protect our communities without infringing on Americans’ constitutional rights.”

In the statement, McConnell decried “partisan theatrics and campaign-trail rhetoric” and said only “serious, bipartisan, bicameral efforts will enable us to continue this important work and produce further legislation that can pass the Senate, pass the House, and earn the president’s signature.”

The news conference came two days after 22 people were killed in a mass shooting at a Walmart in El Paso. Only hours later, nine more were killed in a shooting in a nightlife district in Dayton, Ohio — the 250th and 251st mass shootings this year alone. The 31 deaths, Schumer said, exceeds the number of American soldiers killed in Afghanistan in 2017 and 2018 combined.

“The Walmart was in El Paso but it really could have been anywhere in America, even here,” Schumer said. “As long as there is easy access to weapons of war [it will] remain the unaddressed crisis.”

King said universal background checks have the support of 90 percent of Americans and 80 percent of licensed gun owners. The veteran Republican urged President Donald Trump to announce his support for the bill and for GOP lawmakers to “go over the heads” of the National Rifle Association and other special interest groups.

"The so-called universal background check bill passed by the House would not have prevented any of the criminal acts in El Paso or Dayton," an NRA spokesman said Tuesday night in an email.  "Instead of looking for effective solutions that address the root cause of violent crime and can save lives, anti-gun politicians would rather focus on scoring political points by pushing legislation that only restricts the rights of law-abiding gun owners."

“The American people are literally crying,” King said. “Let it come to the floor for a vote and let the chips fall where they may. I am confident that good will prevail and this legislation will pass.”