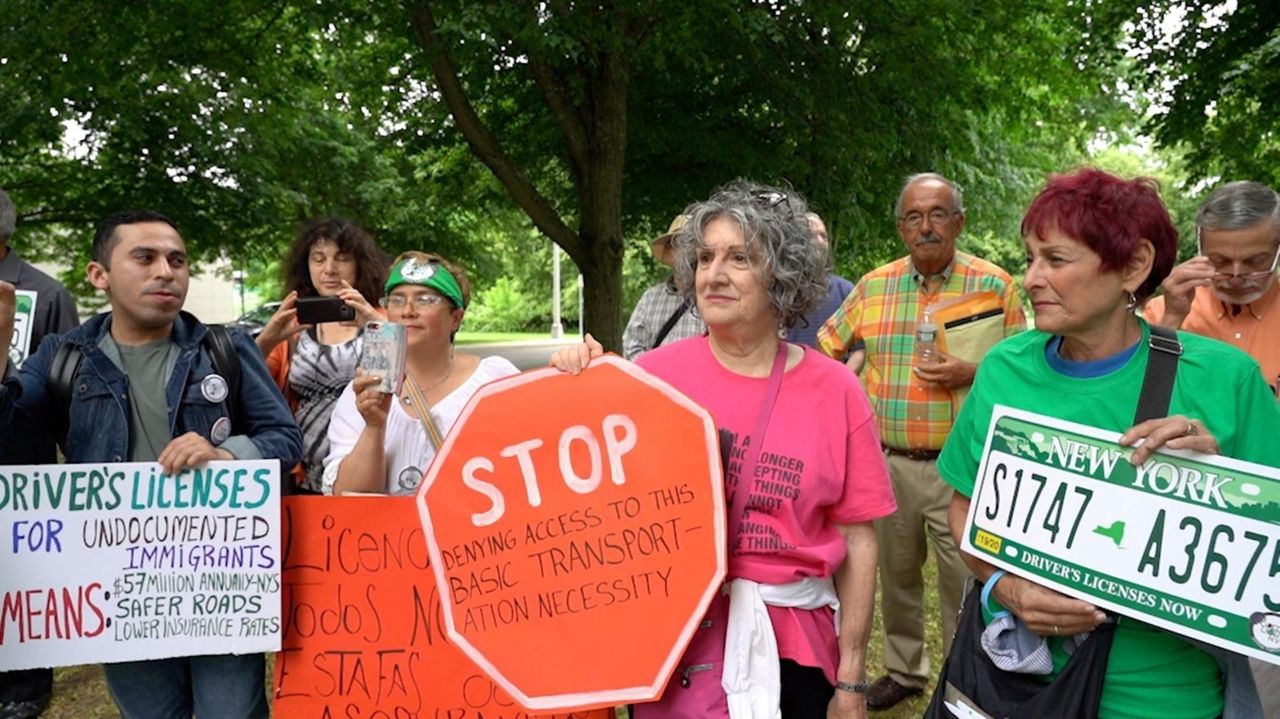 On Friday, more than 100 immigrant advocates gathered in Suffolk in a last-ditch effort to get Long Island’s six Democratic state senators to vote for legislation that would make immigrants who are in the country illegally eligible for driver’s licenses. Credit: Debbie Egan_Chin

Two of Long Island's newest Democratic state senators said they would not back a bill allowing immigrants in the country illegally to obtain driver's licenses, even as about 100 advocates gathered in Hauppauge in a last-ditch effort to gain their support on Friday.

Sen. Anna Kaplan (D-Great Neck) and Sen. Kevin Thomas (D-Garden City) separately and for different reasons say their concerns about the "Green Light New York" bill have yet to be fully addressed.

“I have approached this bill with an open mind, and worked very diligently to hear from the residents I represent, as well as experts and advocates," Kaplan said. "There have been real concerns raised by our local law enforcement, and I value their input on legislation that has an impact on public safety, which this bill does. At this point, those concerns have not been fully addressed, and without the blessing of our local law enforcement, it’s difficult for me to throw my support behind the bill.”

Thomas said he was still not convinced that issuing driver's licenses would be in the best interest of immigrants who have entered the country illegally. He is concerned the bill would further expose them to Immigration and Customs Enforcement searches.

"It's not just political for me. I'm not afraid to take an unpopular position," Thomas said. "My position is that I don't want to hurt people by voting yes on something like this."

The state legislation would give about 265,000 people who are in the United States illegally the chance to get New York driver's licenses. The measure this week advanced in the state Assembly but faces uncertainty in the Senate with two weeks left in the legislative session.

Nassau County Democratic chairman Jay Jacobs warned that if Long Island’s Democratic senators were to back such a “far progressive” measure, the party could lose its Senate majority, won only eight months ago.

Immigrant rights groups, religious leaders and labor union heads spoke at the Hauppauge rally about how the bill would benefit public safety while also stimulating the economy. The measure would make the roads safer by requiring more undocumented immigrants to take a driver's exam and buy vehicle insurance.

"We need Long Island senators to find the courage and stand up and fight for what's right," said Cecilia Martinez, coordinator for the Long Island chapter of the TPS Alliance, a group that advocates mostly for immigrants with temporary protective status.