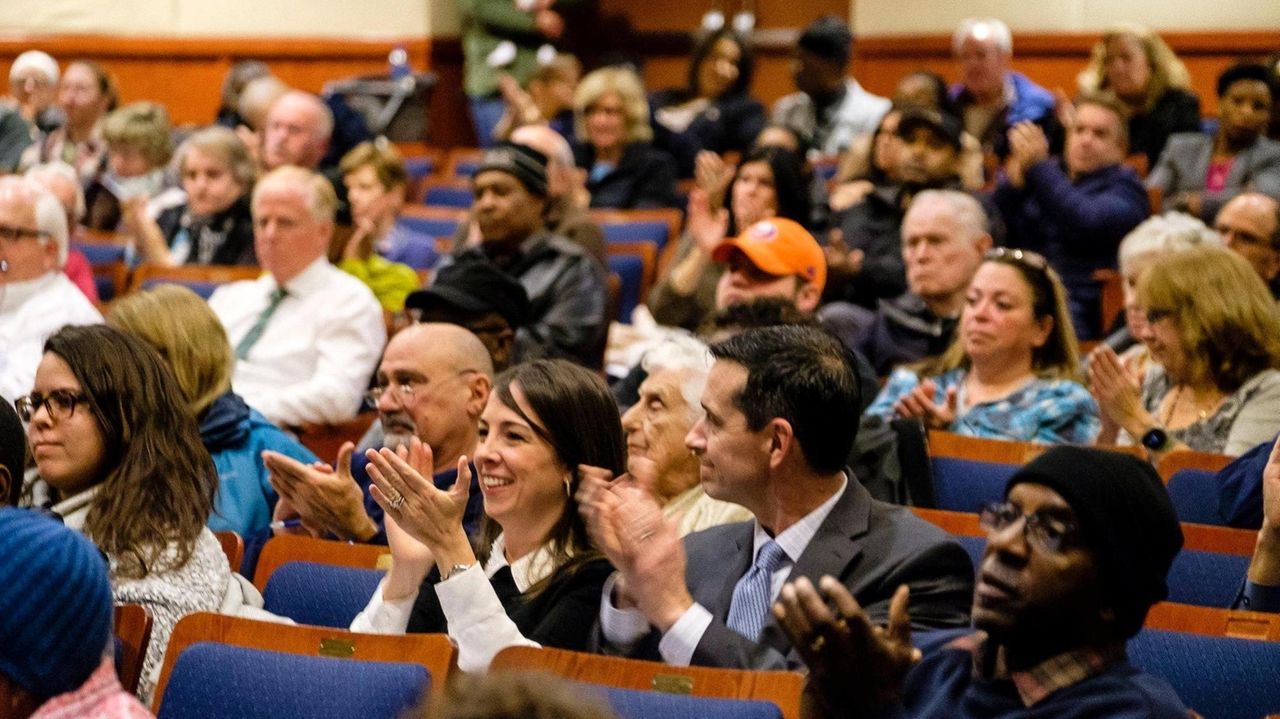 Residents gathered at the Elmont Memorial Library Tuesday to express concerns about a state plan to build a more than $1 billion Islanders arena project at Belmont Park, kicking off three days of public hearings this week. Credit: Newsday / Raychel Brightman

Residents expressed concern Tuesday about a state plan to build a more than $1 billion Islanders arena project at Belmont Park, kicking off three days of public hearings this week.

Concerns ranged from the size of the project, lack of adequate commuter options, increased traffic and the viability of the retail included.

The project calls for construction of a 19,000-seat hockey arena and 435,000 square feet of retail space, with restaurants, a movie theater and a 250-room hotel.

“What you're proposing here is just too big," Virginia Amato of Elmont told state officials.

If approved, the sports and entertainment complex would be completed by 2021 on state-owned land along Hempstead Turnpike and the Cross Island Parkway.

Empire State Development, the state’s economic development agency, last month issued a nearly 700-page draft environmental impact study showing that the project would increase traffic congestion in the area, even with additional Long Island Rail Road trains running to and from the site on game days.

The report found the project “would not have the potential to result in significant adverse cumulative impacts, other than in the area of transportation.”

State Sen. Todd Kaminsky (D-Long Beach) said at Tuesday's meeting, at the Elmont Memorial Library, that he's heard from residents who are "extremely concerned and alarmed" about the proposal.

"This project is an important one, but there’s nothing inevitable about it," Kaminsky said.

Kaminsky has pressed for a full-time, full-service LIRR station at Belmont to be added to the site.

“I think the presentation you just made, where you're asking thousands of people to change their driving behavior, frankly underscores how unprepared this current plan is to absorb the thousands," Kaminsky told state officials.

Laura Ferone, president of the Floral Park-Bellerose school board, pushed for a commitment to a berm or barrier at an elementary school that shares a 1,000-foot border with the proposed arena. The barrier, she said, would protect students from potential future construction at the site.

Some residents, including Jerry McGowan of Floral Park, said they had concerns about the viability of the retail included in the project, given the strength of online shopping companies.

"Do the right thing and cancel this project with its potential destruction on this wonderful community that so many of us have called home and will call home for years to come," McGowan said.

But Paul Sapienza, president of the Elmont Chamber of Commerce, said that so long as public safety concerns are addressed, the project is “an opportunity to energize the local business community.”

Meetings on the proposed project are also scheduled for 4 p.m. and 6:30 p.m. Wednesday and 6 p.m. Thursday at the Elmont Memorial Library, 700 Hempstead Tpke.