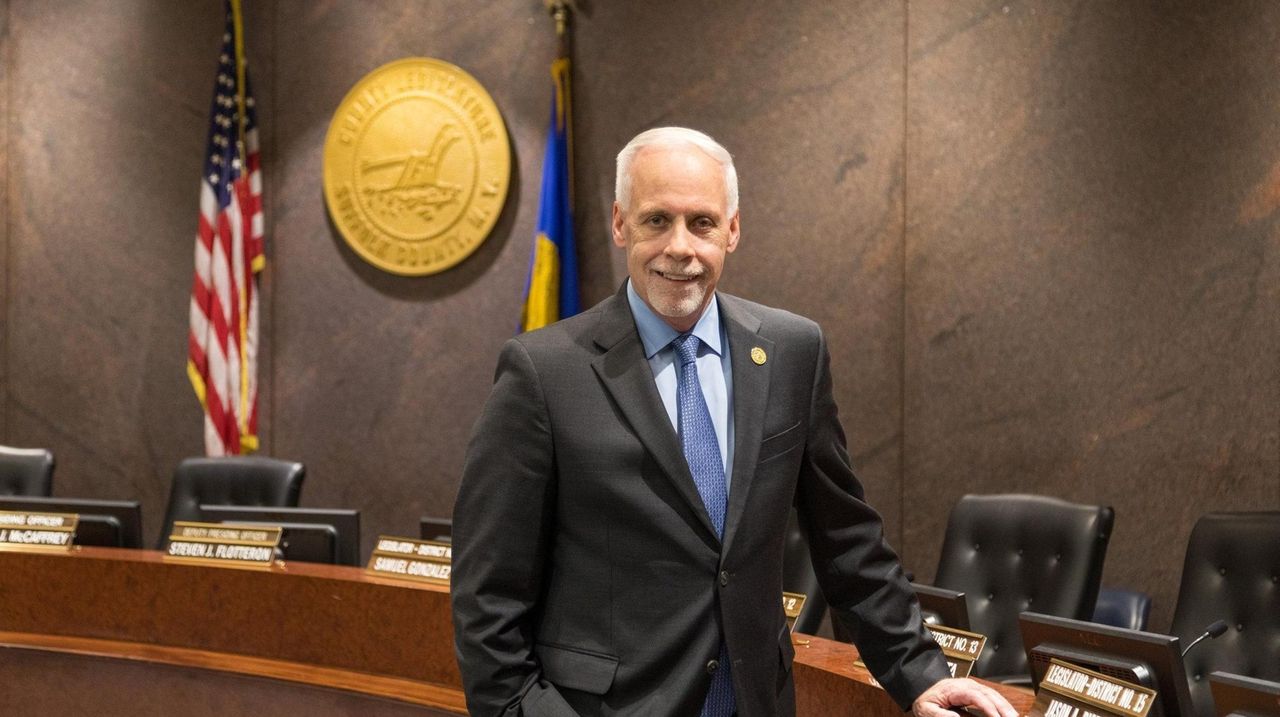 McCaffrey, 67, told Newsday he's focusing on the county's finances and environment, as well as initiatives he and Republicans felt couldn't get through the legislature while Democrats were in control.

He said he would:

"I've worked hard to get here, and I really welcome the opportunity to make the best of it," McCaffrey said of the presiding officer's job.

With an 11-7 majority, McCaffrey will lead the legislature as the county again experiences a surge in COVID-19 cases.

The legislature will have oversight of the county's police reform plan, passed last March after the murder of George Floyd by former Minneapolis police Officer Derek Chauvin.

"They have a responsibility as the legislature to check and make sure that police reform is implemented as designed," said Tracey Edwards, Long Island Regional Director of the NAACP.

This year, the county legislature is expected to allocate millions of dollars in federal aid for infrastructure projects that are expected to include expansion of access to sewers.

Lawmakers also are expected to allocate millions of dollars from legal settlements with pharmaceutical companies for opioid-addiction programs.

Finally, the Republican takeover — and McCaffrey's focus on bipartisanship — comes after a pitched partisan battle in December in which Democrats forced through a plan to redraw legislative district lines for the next decade before they lost the majority.

McCaffrey is fighting to overturn that redistricting plan in court and through legislation.

Republicans argue the redistricting violates the county charter because Calarco's office drew the district maps instead of a bipartisan commission.

Calarco said he had to do so because legislators from both parties missed the deadline to appoint commission members.

In an interview with Newsday, Suffolk County Executive Steve Bellone, a Democrat, said he believes he and McCaffrey can work together on county issues.

"I’m interested to hear whatever his ideas are and will definitely keep an open mind and look to see if we can reach common ground on any issue," Bellone said.

Legis. Jason Richberg (D-West Babylon), the new minority leader, said while McCaffrey has kept lines of communication open, Democrats must "hold the majority accountable to the taxpayers and make sure we're running a fair and equitable government for all."

McCaffrey grew up in Massapequa, with three brothers and a sister. Their father was an NYPD detective; their mother worked as a secretary at Our Lady of Lourdes Roman Catholic Church in Massapequa Park.

McCaffrey said he had wanted to get into the "family business" of law enforcement, but was colorblind.

He enrolled in the Agricultural and Technical College at Farmingdale, now called Farmingdale State College, but left without graduating to take a trucking job.

McCaffrey recalled that after his father's death in 1988, he "turned my life around" and reevaluated his priorities.

He became president of the local civic association, and later returned to college for a certificate.

McCaffrey was elected to the Lindenhurst Village Board in 1990.

In 1995, McCaffrey became secretary-treasurer of Teamsters Local 707 in Hempstead, which represents truck drivers, warehouse workers and Nassau Off-Track Betting Corp. employees. He was elected president of the local in 2000.

McCaffrey said the pension fund's collapse stemmed from the 2008 stock market crash. Employers went out of business, contributed less money to the fund and hired more nonunion workers, he said.

"Neither Warren Buffett or Harry Houdini could have saved this pension plan," McCaffrey told Newsday.

McCaffrey said the union has applied for relief under a provision of the American Rescue Plan aimed at bailing out troubled union pension plans.

He was serving as Lindenhurst Village deputy mayor when he was elected to the Suffolk County Legislature in 2013.

GOP and Democratic colleagues in the legislature describe McCaffrey as a thoughtful listener and a hard worker who can set politics aside to accomplish his goals.

Suffolk Republican Chairman Jesse Garcia said the GOP caucus picked McCaffrey for presiding officer because he was a "tough, principled individual" with years of experience in government and with Local 707 union.

"He has the experience to lead a very aggressive agenda that backs law enforcement, small businesses and protects taxpayers," Garcia told Newsday.

"I think you're going to see a fighter in that role," Daniel Levler, president of the Association of Municipal Employees, the county’s largest public employee union, said of McCaffrey.

Richard Schaffer, the Suffolk Democratic chairman and Babylon Town supervisor, said McCaffrey was "very partisan" when he first got into politics.

But Schaffer, who once lived down the block from McCaffrey in Lindenhurst, said they have worked well together since McCaffrey has, "come to recognize that you get more done" working across the aisle.

McCaffrey spoke about the importance of bipartisanship on his first day as presiding officer, Jan. 3.

"I look forward to work with not just my caucus, but the Democratic Caucus as well, to do great things here in the county," he told county legislators.

That day, however, he also tapped Republicans and Conservatives to three top legislative positions, and excluded Democrats from any legislative committee chairmanships.

McCaffrey moved to shore up an alliance with Conservatives by nominating Brett Robinson, secretary of the county party, as deputy legislative clerk and Legis. Nicholas Caracappa (C-Selden) as legislative majority leader.

The moves will help guarantee Conservative support for Republican candidates in the future, McCaffrey said.

Robinson pleaded guilty in 2016 to a noncriminal charge in connection with his role in the Islip Town dumping scandal.

Caracappa has pleaded not guilty to domestic-violence related charges.

McCaffrey said Robinson's "culpability" in the dumping was, "a lot less than what had originally been suggested."

McCaffrey said he believes Caracappa will be vindicated in court.

Also on Jan. 3, McCaffrey proposed changing legislative rules to require everyone to stand for the Pledge of Allegiance and the national anthem at the start of legislative meetings, instead of merely saluting the flag.

While Democrats voted unanimously for that rule change and others, along with McCaffrey's staff appointments, Richberg cautioned that the requirement to stand for the pledge could infringe on freedom of speech rights.

But McCaffrey said, "I don't think you have a right to say that you shouldn't stand up for the Pledge of Allegiance."

He also told Newsday he wants to roll back one of the main achievements of Calarco's: public campaign financing.

McCaffrey said he does not believe residents should have to help fund candidates they do not support, or that public financing will reduce the influence of special interest groups that still would donate or spend large sums with super PACs.

Richberg said public campaign financing is essential to "level the playing field" for candidates from all backgrounds.

Despite friction on such issues, McCaffrey said he plans to work with Democrats, even after redistricting tested their relationship.

"We are going to do the people's business and we're not going to let partisan politics get in the way of it. I think we have more in common than we don't," McCaffrey said.

Career: Elected presiding officer of the Suffolk County Legislature on Jan. 3. First elected to the legislature in 2013, after serving previously on the Lindenhurst Village board of trustees for more than 20 years. President of Teamsters Local 707 since 2000.