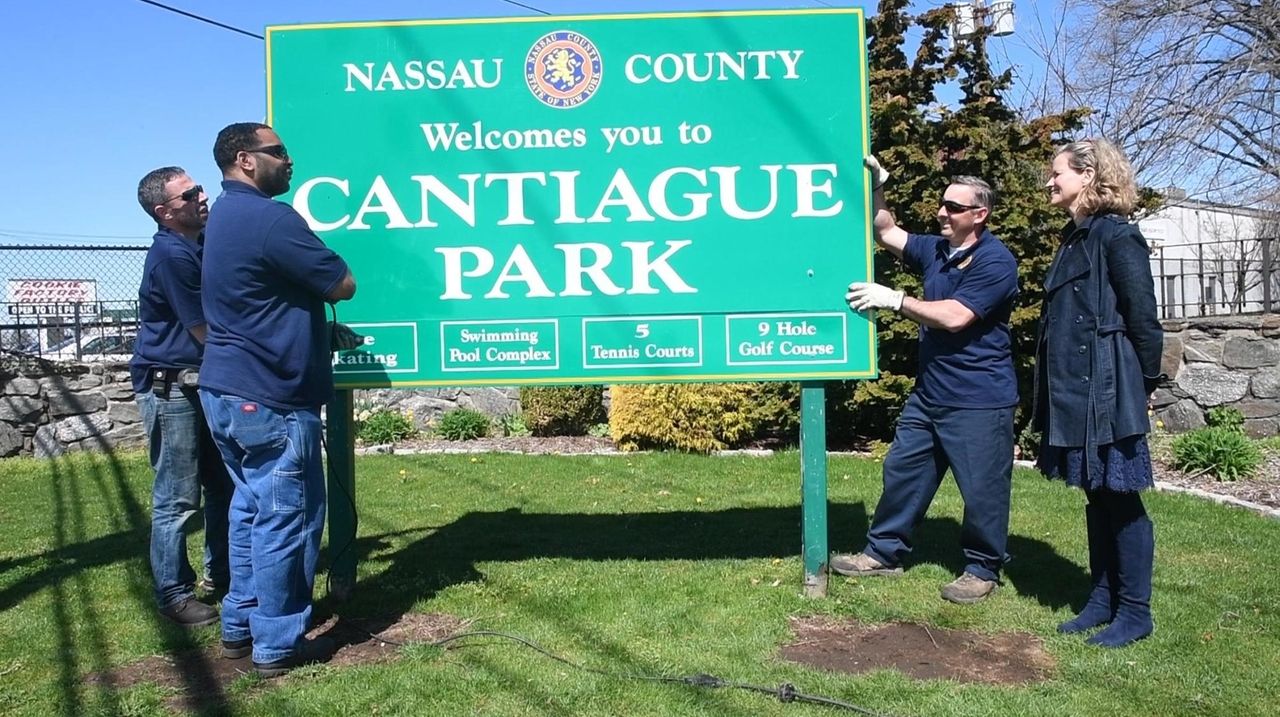 One by one, the administration of Nassau County Executive Laura Curran is attempting to replace as many as 1,000 signs bearing her predecessor’s name with ones costing several hundred dollars and highlighting nobody’s name. The county is beginning with 260 entrance to parks signs at roughly 70 locations, an effort that is projected to cost $73,500. Credit: Newsday / Alejandra Villa, Scott Eidler

One by one, signs featuring the names of former Nassau County Executive Edward Mangano and local officials are being replaced with something unheard-of in one of the capitals of political branding: signs with nobody’s name on them.

Despite the potential cost of tens of thousands of dollars, Democratic County Executive Laura Curran said it’s important to fulfill her campaign promise to rid the entrances of county parks and golf courses of signs with officials’ names.

Curran has criticized signs as self-promotional and a waste of taxpayer funds. In replacing them, the message to residents is “these are your roads, these are your parks,” Curran said. “They’re not mine. You pay for them.”

But John Ferretti Jr., a freshman Republican legislator from Levittown who has asked to add his name to signs in his district, is no fan of the move. “I feel as a new legislator, I think it’s important that people know who their representative is,” he said.

Administration officials say they will include lawmakers’ names on signs if they insist, although they’ve drawn the line at Ferretti’s request to include his email address, saying federal law bars tiny print on road signs.

There are as many as 1,000 signs with Mangano’s name on them, including at the Cradle of Aviation Museum in Garden City, Chelsea Mansion in East Norwich and Nassau Community College, according to the administration.

Officials say it could cost as much as several hundred dollars apiece to replace them with generic versions. But they argue that the program will provide benefits over the long term, as no future county administration ever will have to replace them.

Nassau reported a $50.1 million deficit last year, and its financial control board, the Nassau Interim Finance Authority, has identified $104.7 million in uncertain revenues this year.

But first, they will have to find all the signs.

There are so many that county officials can’t provide a precise number. Nor can they say where all of them are, or how many in each of the 19 legislative districts contain legislators’ names.

The county was so “heavily branded, there are still surprises,” Curran said. “Oh, someone sent me one from the middle of a park in Massapequa. Just tucked in out-of-the-way places.”

At some parks last week, the county covered old signs featuring officials’ names. New generic signs, for example, went up in Hickville’s Cantiague Park and East Meadow’s Eisenhower Park at a cost of $350 each, a county spokesman said.

The sign-changing campaign got off the ground shortly after Curran’s inauguration in January, when parks workers began taping over the names of county officials on more than 100 signs.

Green tape was placed over names on the “Welcome to Old Bethpage — Home of the U.S. Open” sign.

Down the road, the Old Bethpage Village Restoration sign still has green tape covering the names of Mangano and his onetime Parks Commissioner Carnell Foskey, who later became county attorney.

On a sign at the Stan Ruppenthal Soccer Complex in Levittown, white tape covers Mangano’s first name and the first three letters of his last name, so that it appears to announce: “County Executive Gano.” Not covered yet are the names of former legislature Presiding Officer Norma Gonsalves, an East Meadow Republican, and former GOP Legis. Dennis Dunne, now a Hempstead Town councilman whom Ferretti replaced.

“It’s going to take a while to replace them all. In the meantime, the tape’s going to have to work,” Curran said.

In Levittown, the county did spend $1,900 for new signs for Ferretti, officials said.

Frank Moroney, a spokesman for the GOP legislative majority, said Curran’s anti-sign campaign is “almost an accountability issue. A lot of people don’t know who their county legislator is. . . . This is really so people know who to get in touch with if there’s an issue.”

But freshman Legis. Joshua Lafazan of Woodbury, who caucuses with Democrats but is unaffiliated with a political party, said he doesn’t want his name on any signs.

Name recognition, he said, should come from “doing constituent events, crisscrossing the district, and simply answering every phone call that comes to the office.”

Legis. Debra Mule (D-Freeport), another freshman who took office Jan. 1, said “I want people in the community to get to know me because I’m out there, not because there’s a sign with my name.”

John Schmitt, 47, who lives across the street from Levittown’s Vietnam Veteran’s Memorial Field, where a new sign features the park’s name, Ferretti’s name and the department seals of the five United States armed services, said, “there’s no need for a legislator’s name to be on it or any politician, unless it’s memorializing them, or it’s named after them.”

Schmitt, who owns a small e-commerce business, said “the cost invested in changing the signs when someone new is elected is a waste of taxpayers’ funds.”

But, “if you want to have a veteran from Levittown’s name who had given his life for the defense of this country, I’d be fine with that.”