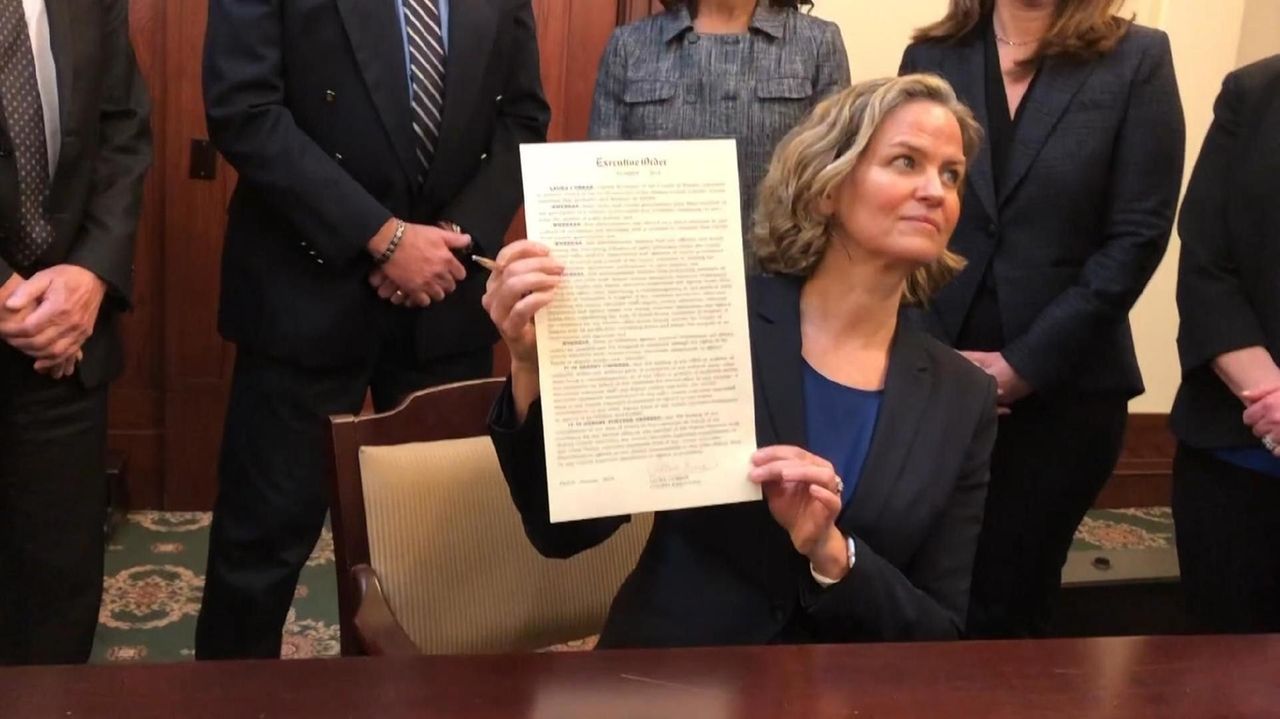 Nassau County Executive Laura Curran, on Wednesday, Jan. 17, 2018, signed an executive order barring her appointees from holding a leadership position in a political party or donating to her campaign. Credit: Howard Schnapp

Curran, a Baldwin Democrat who took office Jan. 1, appears to be the first county executive in New York State history to sign such a measure, although the practice is common among local district attorneys.

“Today I begin to root out corruption that has tainted local government,” Curran said at a ceremony in Mineola. “One of my top priorities is to take the politics out of our government. This is a major step forward toward full transparency in Nassau County government and enacting true campaign finance reform on the local level.”

The order prohibits any member of Curran’s top staff, including department heads, commissioners and deputies, from holding a position of authority in a political party or committee or from contributing to Curran’s campaign committee.

The order does not apply to Civil Service and law enforcement employees who belong to county labor unions.

Stephen, Acquario, executive director of the New York Association of Counties, said “Curran deserves credit for swiftly advancing ethics and integrity proposals addressing local needs in Nassau County. We believe Nassau is the first county to implement all of these specific actions in one compendium of measures.”

But Presiding Officer Richard Nicolello (R-New Hyde Park) said the order has glaring loopholes, including allowing appointees to make contributions to other political entities that can then reroute the money back to Curran’s campaign.

“This executive order is largely symbolic and reduces transparency since it allows financial contributions made by employees to political action committees and political parties to be transferred back to the county executive,” Nicolello said in a statement.

Kathleen Clark, a law professor at Washington University in St. Louis who specializes in government ethics, said Curran is pursuing a “worthy goal.” But Clark said some courts have looked skeptically on strict ethics restrictions, occasionally striking them down.

“In theory, an appointee could challenge these restrictions, arguing that they are not narrowly tailored to achieve their goal or prevent wrongdoing,” Clark said. “In particular, a low limit — rather than a ban — on campaign contributions may have been a safer route.”

Under past Republican and Democratic county executives appointees were frequent contributors to political campaigns and often were leaders of local political clubs.

Curran, a former Nassau County legislator, ran on a promise to reform the county’s ethics policies following the indictment of former County Executive Edward Mangano on federal corruption charges. Mangano, a Bethpage Republican who did not seek a third term, has pleaded not guilty.

“Today is a very important first step in showing that we are going to do things differently,” Curran said.

The county legislature, which is controlled by Republicans, has no restrictions on contributions to county lawmakers.

A spokesman for the Minority Democrats declined to comment on Curran’s order.

Nassau Democrats vow to make most of chance to leadNassau Democrats left out in the cold for the past eight years were welcomed back ... Brown: Curran’s time precious as she pushes changeThere's a tradition in Nassau County few residents ever get to see, and yet there ... Editorial: New leaders, fresh starts in LI gov’tNew faces are taking oaths of office, from western Nassau to Montauk. The tally includes ... Brown: Laura Curran has a lot of work to do

On Monday, Jan. 1, 2018, Laura Curran was sworn in as Nassau County executive and Newsday columnist Joye Brown talked about what  Curran should expect in her first term.