Nassau Democrats left out in the cold for the past eight years were welcomed back with space heaters and hand warmers.

“Turns out the Republicans were right: It’s a cold day in hell when the Nassau County Democrats took back the county,” Nassau Democratic Chairman Jay Jacobs said after the ceremony, held outside the legislative and executive building in Mineola amid brutally cold weather. “So it feels very good.”

Democrats, newly in control of Nassau’s highest office, reflected on nearly a decade out of power. They vowed not to botch the opportunity and encouraged bipartisan outreach.

“These were tough times. I think we can appreciate the mountaintop because we spent so much time in the valley,” Jacobs said. “And now our job is not to be arrogant and not to go screw it up. Because that you can do.”

The last Democrat to hold the office, Rep. Thomas Suozzi of Glen Cove, said in an interview that Curran can learn from his experiences.

Suozzi, who served two terms from 2002 to 2009 and lost elections to Republican Edward Mangano in 2009 and 2013, said: “One thing I didn’t do that I should’ve done: She should try to build the Democratic brand. She’s got to focus on the Democrats representing good government.”

Suozzi noted that Curran will face obstacles he didn’t when he first took office, when Democrats also controlled the legislature. Republicans now have a majority in the legislature. “I had it easy,” Suozzi said.

On the minds of many of the dignitaries in attendance was how to advocate for Long Island after the recent overhaul of the nation’s tax code, which caps the deduction on local and state income, sales and property taxes at $10,000. 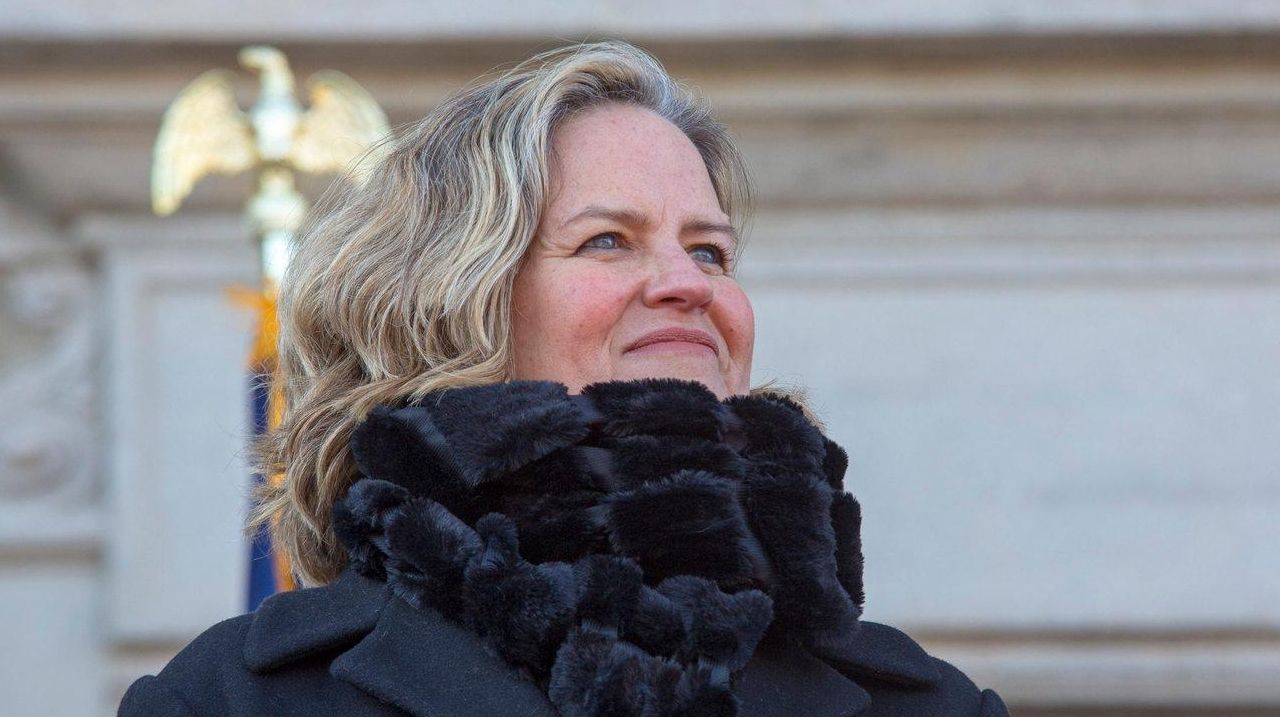 Brown: Laura Curran has a lot of work to do On Monday, Jan. 1, 2018, Laura Curran was sworn in as Nassau County executive and Newsday columnist Joye Brown talked about what  Curran should expect in her first term. Credit: Newsday / Chris Ware

“We’re going to need a leader with real courage, real energy, and a leader who understands there is no simple solution,” he said.

Democratic Suffolk County Executive Steve Bellone, who made robocalls opposing the Trump tax plan last month, said after the ceremony that he looked forward to a partnership with Curran. Cuomo and Bellone had friendly relations with Mangano, appearing together during news conferences, often for storm and snow preparations.

“We’re one region, and quite frankly we’re under assault right now from Washington, and we have to stand together and work together, not in a partisan way, on behalf of all Long Islanders,” Bellone said.

Rep. Kathleen Rice (D-Garden City), the former Nassau district attorney, said in an interview that Curran should “build strong relationships with people on both sides of the aisle.”

In addition to the change at the top in Nassau, Democrat Laura Gillen was elected Hempstead supervisor. North Hempstead had long been the only town in the county to be led by a Democrat.

Former Nassau Legis. Wayne Wink, a Democrat who served in the chamber’s minority before he became North Hempstead town clerk in 2014, said he viewed Curran’s election as “a turning of the page.”

He said, “This is a body that historically has been incredibly polarized, and I hope we can get past that now.”