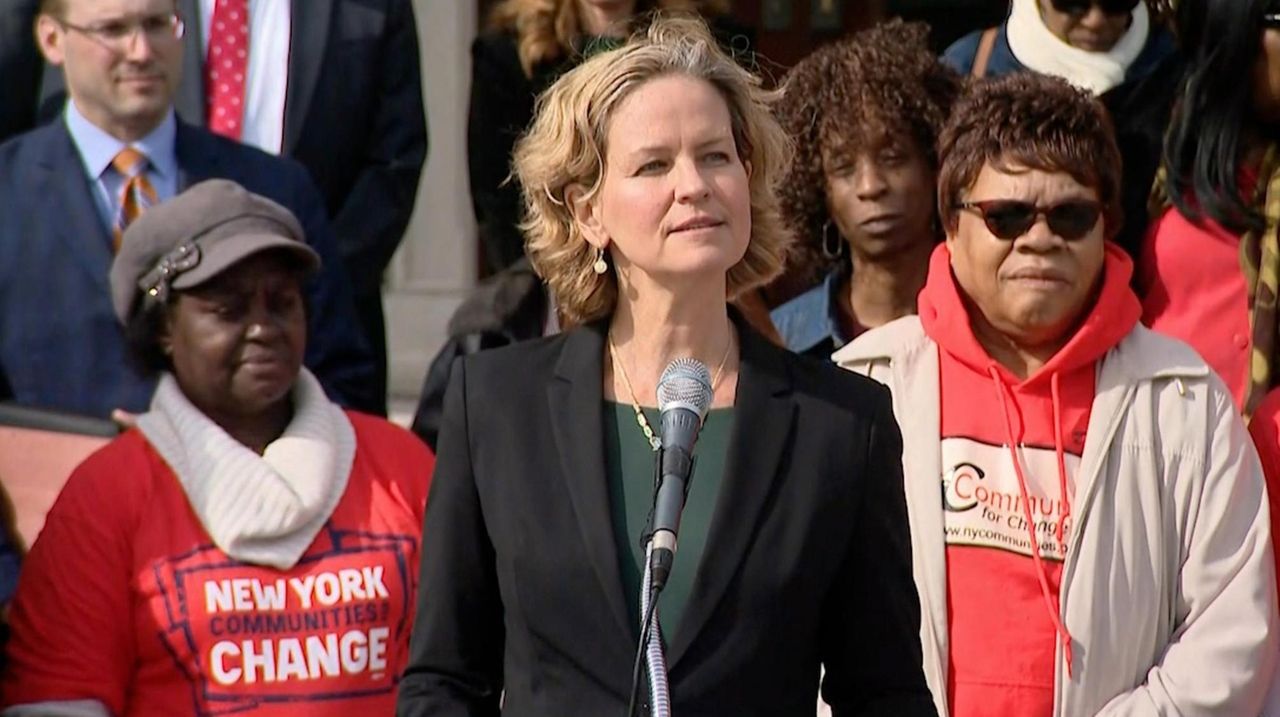 Nassau County announced that it will pay more than $5.4 million to a nonprofit housing developer to settle a 14-year-old lawsuit charging the county with discriminating against minorities by not offering housing opportunities to people with low and moderate incomes, County Executive Laura Curran said Friday in front of the county building in Mineola.  Credit: News 12 Long Island

Nassau County will pay more than $5.4 million to a nonprofit housing developer to settle a 14-year-old lawsuit charging the county with discriminating against minorities by not offering housing opportunities to people with low and moderate incomes.

In addition to the payment to plaintiff MHANY Management Inc. to create affordable housing, Nassau will set aside $450,000 per year for three years for private and nonprofit developers seeking to build mixed-income rental housing in areas with high-performing schools.

The county also will pay $120,000 to fund civil rights advocacy by the nonprofit group New York Communities for Change, co-plaintiffs in the case.

"I want to reaffirm my commitment to opening doors of opportunity to every person who calls Nassau home," Nassau County Executive Laura Curran said Friday in announcing the settlement in front of the county building in Mineola.

More than two dozen advocates and attorneys gathered to applaud the announcement.

There was no information on the specific location of any new housing. But the Curran administration and representatives from MHANY, a Brooklyn-based  nonprofit that promotes affordable housing, said the goal is to build mixed-income affordable housing dispersed throughout the county in "high opportunity" communities with low poverty rates, good schools, job opportunities and access to transportation.

"This has been a long time coming. Change has come to Nassau County and it wasn't easy but it's positive," said Fred Brewington, attorney for MHANY and the nonprofit New York Communities for Change.

NYCC organizer Diane Goins, 76, of Hempstead, said: "You can't keep putting affordable housing in Hempstead. We want to live all over Long Island. We all want great schools for our kids. There's a lot of prejudice and segregation here on Long Island, and we just want better for our children and grandchildren."

The case dates to a plan in 2004 by former Nassau County Executive Thomas Suozzi to sell the old 25-acre Social Services office complex in Garden City for about $30 million to a developer to build 311 affordable housing units. But Garden City Village officials changed the zoning to allow development of 90 single-family homes or 150 town houses.

The failed housing plan was challenged by the Long Island chapter of the now-defunct group ACORN, which argued the site should be used for affordable housing. It filed suit in 2005 against Garden City and Nassau County alleging violations of the Fair Housing Act and Civil Rights Act.

The settlement agreement, approved Monday by the county legislature, is neither an admission that the county was wrong nor a concession by MHANY that its claims were unfounded. It was aimed at avoiding the expense of a trial, according to court documents.

Three Nassau legislators, all Democrats, voted against the settlement, saying they did not believe it would bring more affordable housing to the county. The county's 19-member legislature has a Republican majority.

They said because the settlement agreement does not require the affordable housing to be built exclusively in Nassau, they're concerned MHANY will build in Suffolk.

"In our opinion, this settlement does not provide a concrete pathway to affordable housing that promotes diversity in Nassau County," said Minority Leader Kevan Abrahams (D-Freeport).

In addition to Abrahams, Legis. Siela Bynoe (D-Westbury) and Legis. Carrié Solages (D-Elmont) voted against approving the settlement. All three are African-American.