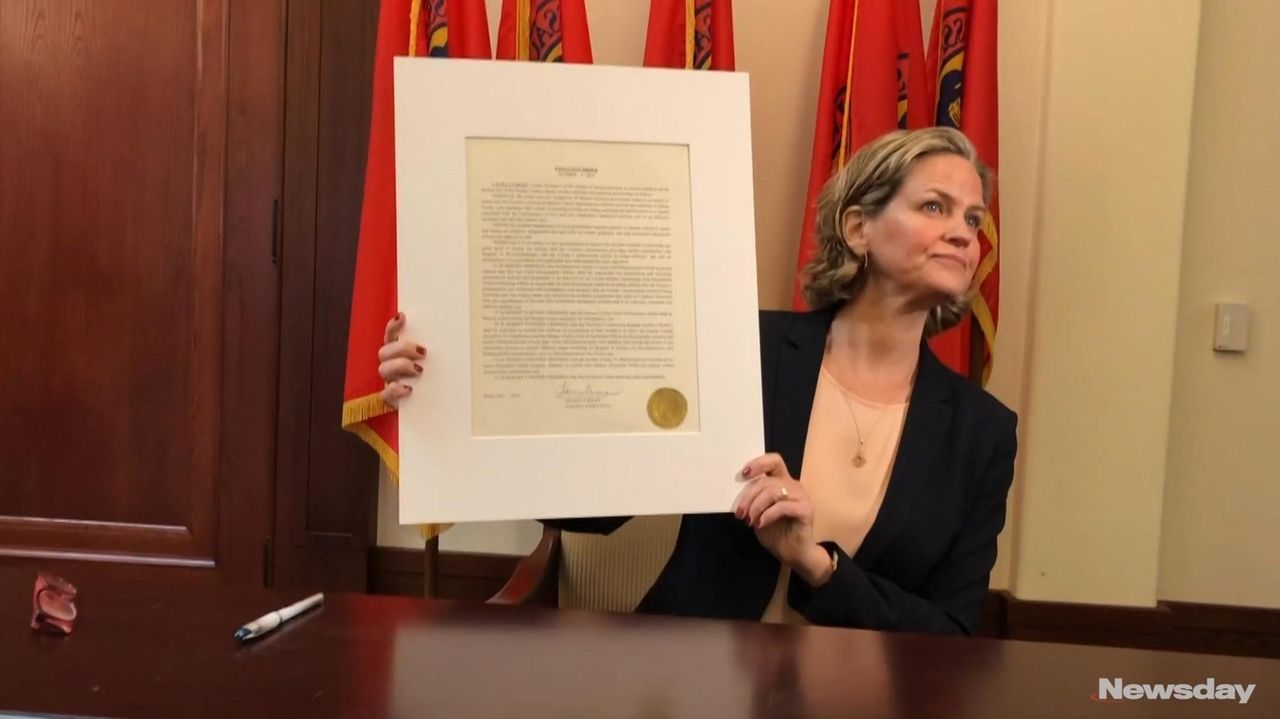 In the order, Curran expanded the county’s procurement monitoring system to track contracts with outside vendors beginning when county departments request the work. The county currently tracks contracts beginning when they are signed, said Deputy County Executive for Compliance John Chiara.

Under the order, county departments also will have a chief contracting officer who will report to the new county procurement officer, Robert Cleary, who now serves as Nassau procurement director.

The executive order will “implement historic contract procurement reforms and put new controls in place that will take aim at ending contract-related corruption here in Nassau County,” Curran said at a news conference in Mineola.

Dean and Adam Skelos were convicted on federal corruption charges, including that Dean Skelos improperly influenced the award of a county contract to a company where Adam worked. The convictions were overturned, and the Skeloses are facing retrial later this year.

Also, Nassau Democratic lawmakers have asked Curran to review or rebid all proposed pacts approved by former Chief Deputy County Executive Rob Walker, a Republican who served under former GOP County Executive Edward Mangano. Walker faces trial in September on federal charges of obstruction of justice and lying to FBI agents. He has pleaded not guilty.

At the news conference, Curran announced that her office had discovered a possible conflict with two contracts with Nelson & Pope, a longtime county contractor based in Melville. Curran would not identify the conflict.

Frank Moroney, a spokesman for the county legislature’s GOP majority, called Curran’s probe of Nelson & Pope “nothing more than heavy handed bullying of a private company, for no legitimate cause . . . . ”

Moroney said Nelson & Pope on Tuesday terminated the employment of Walker’s mother, Rose Marie Walker, who is a GOP Nassau County legislator from Hicksville. Moroney called her a “part-time employee whose employment predates her son’s working for the county.”

Rob Walker’s attorney, Brian J. Griffin, said when Walker entered county government, he “fully disclosed his wife’s employment with Nelson & Pope, a company which had been doing work for Nassau County for over 20 years.” Walker’s wife Elizabeth works as an administrative assistant at the company, Griffin said.

Griffin also said, “during his time with Nassau County, Mr. Walker took no part in the awarding of any contract to Nelson & Pope beyond the ministerial act of signing any contract properly awarded by the legislature as he had done with thousands of other contracts.”

Anthony Capetola, an attorney for Nelson & Pope, had no comment.

Moroney, meanwhile, noted that legislative Minority Leader Kevan Abrahams (D-Freeport) “continues to be a high-level employee of Northwell . . . which does business with the county.”

Abrahams, a director in strategic planning at Northwell Health, said he recuses himself on any contracts between the county and the health system. He said his case is “dramatically different” from Rose Marie Walker’s, because “I don’t have a family member in the executive branch who is signing off on these contracts.”

They were among nine companies and 13 individuals named in multiple indictments indicted last month by the Manhattan district attorney’s office for allegedly corrupting the government, bribery, and bribe receiving.

Curran also said Nassau is “moving forward” with monitoring agreements to ensure the contracts are properly overseen, Curran said in a letter to Abrahams Tuesday.

“Questions remain about HAKS and D&B, but they are still providing important services to our county through existing contracts,” Curran wrote. “We need to ensure that the job gets done, and at the same time, eliminate any questions about the procurement of these existing contracts.”

If there are any issues discovered, “we have a plan for cancellation” of work with those firms or any firm under indictment.

Howard M. Rubin, an attorney for HAKS Engineering, said he appreciated that Nassau “has given HAKS the opportunity to prove itself, and the company will ensure that it will not only do the quality work it’s always done, but will strictly abide by the terms of the monitoring agreement.”

D&B president Steve Fangmann said, “Like County Executive Laura Curran, we at D&B Engineers and Architects take the contracting process seriously. Earlier this year, we implemented new internal policies and procedures to ensure integrity in all our business dealings.”

Educator plans lawsuit, says he was reassigned for 'outspokenness' over book
Two turntables and a microphone made Biz Markie a legend
1:07
Where the rich and famous give their private jets a glow-up
Ruling: Suffolk apartment complex broke anti-bias law
Elite runner who competed in Olympic Trials dies at 51
Young sailors cruise onto South Shore for major regatta
Didn’t find what you were looking for?