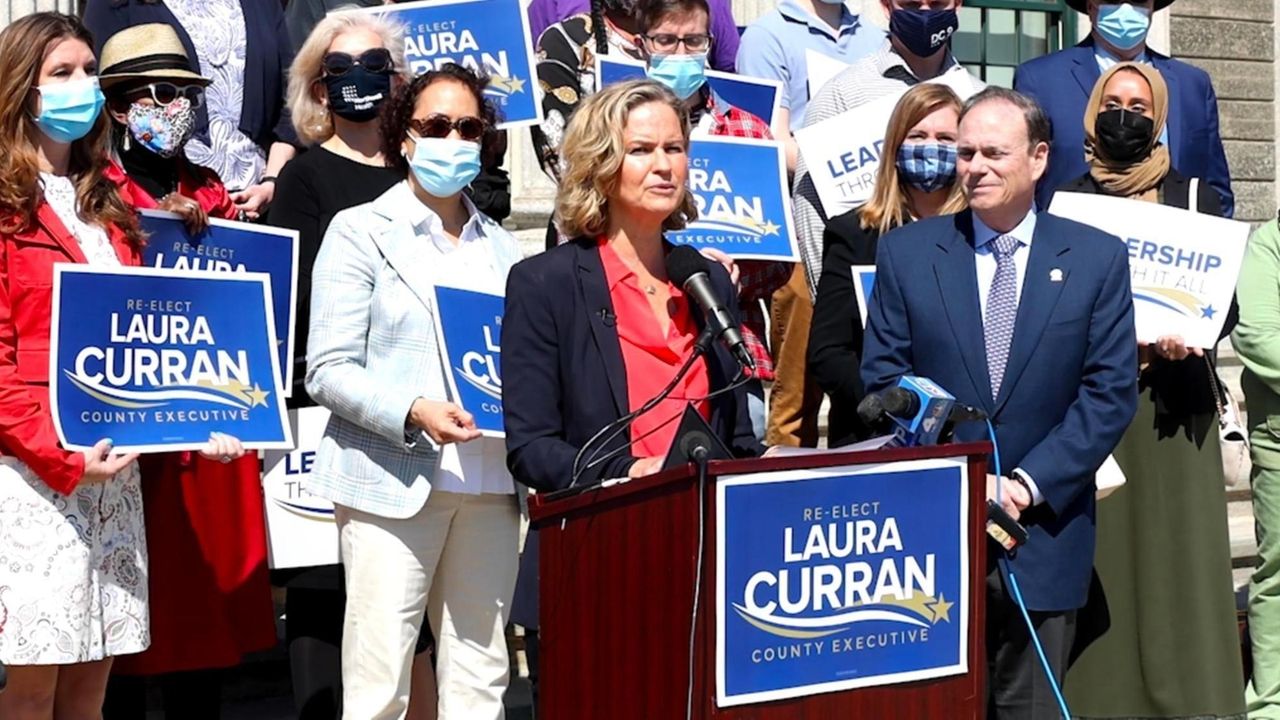 Curran, 53, a Democrat from Baldwin, is seeking her second term in office. She is being challenged by Republican Bruce Blakeman, 65, a Hempstead Town Council member who served as presiding officer of the Nassau County Legislature in the 1990s.

"Now as I stand here not just as county executive but once again as a candidate, asking the people of Nassau to allow me to continue the work that we started nearly four years ago," Curran said, flanked by supporters holding signs on the steps of the county building in Mineola.

Curran noted her work during her first term in enacting ethics reform, creating a redevelopment plan for the 72-acres around Nassau Coliseum, reassessing properties countywide and dealing with the impact of a deadly pandemic.

Jay Jacobs, chairman of the Nassau and state Democratic Party, introduced Curran using a quote former Republican President Ronald Reagan: "Are we better off today than we were four years ago?"

Jacobs said, "In Nassau, the answer is a resounding 'yes.'"

Curran was "unafraid to take on the hard issues," Jacobs said.

"She took us through a pandemic with great courage, with great commitment and with honesty and authenticity to gain the trust of the people of the county of Nassau," Jacobs said.

In her speech, Curran said infrastructure would be at the center of pandemic economic recovery efforts in Nassau.

" … We can create good paying jobs and exciting destinations to draw more residents and tourists to our communities, injecting new revenue into our economy and making Nassau an even better place to live, work and play," Curran said.

According to campaign officials, Curran's top three priorities are: creating 3,300 jobs through 12 shovel-ready infrastructure projects; ensuring equitable vaccine access; and pressing for reopening of businesses and revitalization of downtowns hit by the pandemic.

In an interview with Newsday, Blakeman said he believed the county executive campaign would come down to one issue: Taxes.

He said the election "will be a referendum" on Curran's reassessment program.

"I think it's going to be a very spirited campaign and that at the end of it I feel confident that I will be the next county executive," Blakeman said.

Of the reassessment, Jacobs said: "If we did nothing, 100% of homes would have their taxes go up. This is something that needed to happen and the Republicans know it. They broke it and Laura Curran fixed it."

Then a freshman Nassau County legislator, Curran's campaign platform focused on reforming a county government after her predecessor, Edward Mangano, was indicted in October 2016.

Mangano's wife, Linda, was found guilty of conspiracy to obstruct justice, obstruction of justice and two counts of lying to the FBI.

Lawyers for the couple are seeking a new trial.

While Martins had no ties to the Mangano corruption scandal, Curran and Democrats ran against what they called Republicans' "culture of corruption."

Curran now begins her reelection season with more than $2 million in campaign donations, according to state filings from January.

She and Blakeman, who announced his candidacy for county executive in March, face a July 15 filing date for new state campaign finance filings.

Nassau Republican Committee Chairman Joseph Cairo said he expected there to be enough money "to get out Blakeman's message."

Cairo said, "While we respect the amount of money she [Curran] has raised — which is mostly from donors outside of Nassau County — we are ready."